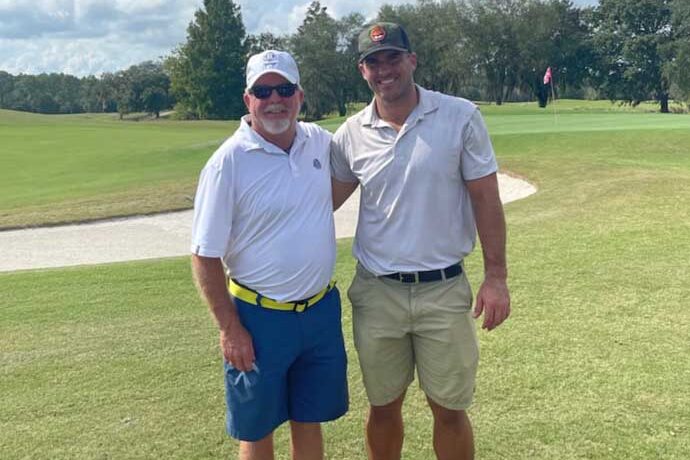 Diagnosed with a retinal degenerative disease called Stargardt Disease nearly 40 -years ago, the 59-year-old Orange Beach resident never lost his love of golf. But as his eyesight deteriorated, he now has to rely on help from friends and coaches/guides to track the flight of his ball.

With a 5.9 handicap index, McCarron plays well enough to be invited to the inaugural U.S. Adaptive Open in Pinehurst, North Carolina beginning July 18. He’s one of three players with Alabama ties to be included in the field. Chris Biggins, the director of player development at the Country Club of Birmingham, and former Birmingham resident Alex Fourie (Knoxville, Tennessee) are the others.

The tournament brings together 96 competitors with a variety of physical challenges for the first time in a USGA-sponsored event. Players in eight different impairment categories will compete in the 54-hole tournament.

“I felt like a seven-year-old on Christmas morning,” McCarron, who plays most of his golf at Gulf Shores Golf Club, said of learning he would be included in the field. “I have been playing golf since I was eight and I’ll be 60 (this month). I was never quite good enough with my vision to try to qualify for the USGA Senior Am.

“I’m just not that good – I was at one time but not anymore,” he continued. “This is like the pinnacle of my amateur golf career is to be able to play in the USGA Adaptive Open.”

How visually impaired is Joe McCarron?

“I can track my ball for about 50 yards and it all depends on sunlight,” he said. “When I have the sun behind me and we have a bluebird sky day, I can see a little farther. If it is overcast, I have no idea – I can feel where I hit it and I am probably 80 percent right.”

Often, Joe McCarron said he can’t see the pin. Links-style courses give him the most trouble because of the lack of definition in the landscape.

“I played in the British Blind Open in 2019 and those, true links-style courses I had no idea where to hit the golf ball. They all looked the same to me,” he said. “I had caddies who would line up and get me pointed in the right direction, give me the yardage and we would fire at it after that.”

When playing locally, he credits friends with helping him.

“I’m fortunate enough to have enough guys locally that help me out and drag my blind [butt] around on the golf course,” he said. “That part of it is great. Otherwise, it would be impossible for me to play golf – I would be out there all day looking for my golf ball.”

Stargardt Disease is hereditary – a younger brother also has it. McCarron was first diagnosed in his early 20s when he began to notice he couldn’t see his ball on the green from 160-180 yards. A visit to a retinal specialist delivered the bad news. Not only did he have Stargardt Disease, but there was nothing to slow it or stop it.

A veteran of other blind golf championships

“As my sight began to deteriorate, I felt like that was going to be the end of my golf career,” he said. “I was hoping that it wouldn’t. It didn’t get super bad until about the last five or six years. I still needed a little help but I need more help now than I did eight or ten years ago. It’s difficult to ask for help after being sighted player for so long.”

McCarron has played well in U.S. Blind Golf Association events with second-place finishes in its U.S. Open in St. Augustine, Florida, and at a national tournament just outside Orlando last October.

Those accomplishments don’t compare to being a part of history playing in the first U.S. Adaptive Open, McCarron said.