For Chris Biggins, US Adaptive Open is a game-changer 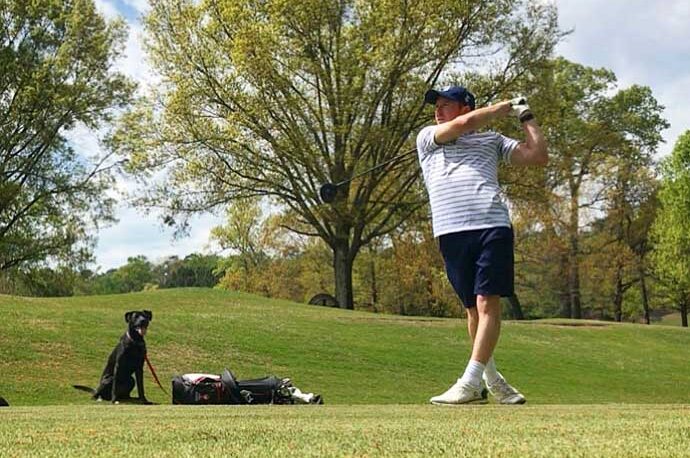 BIRMINGHAM – Baseball’s loss was golf’s gain – at least that’s the way Chris Biggins these days reflects on his life in high school.

Diagnosed with cerebral palsy when he was 11 months old, Biggins has spent a lifetime playing one sport or another. Not only did he love being an athlete, being as active as possible was necessary for his muscular health.

But it wasn’t until he was cut in tryouts from his high school baseball team that Biggins went all-in on golf, something he already loved to play. Turns out, it was the right decision. Today, Biggins is the director of player development at The Country Club of Birmingham.

He’s also one of three golfers with ties to Alabama who will compete in the upcoming US Adaptive Golf Open in the Village of Pinehurst, North Carolina. Orange Beach resident Joe McCarron and Tennessean Alex Fourie, who grew up in Birmingham, are the others.

The three high-level players will be a part of the 96 players competing in a variety of categories at the U.S. Adaptive Open July 18-20 at the famed Pinehurst Resort.

Biggins will compete in the neurological impairment division. Although cerebral palsy affects Biggins’ legs and lower back, it didn’t stop him from playing most of the regular sports growing up. But he said baseball and golf were his favorites.

“My sophomore year of high school I didn’t make the team,” he recalled recently. “I was pretty devastated by that. I disagreed with the coach’s decision. I had been playing baseball with a lot of the people who made the team my whole life and I knew that I was better than them. I was so angry and upset that a coach decided whether I was good enough to play on the team.”

According to Biggins, who grew up in Maryland and also is an accomplished skier, tryouts for the team lasted a week. When the cuts were made, Biggins was one of them.

“The way I play sports isn’t always pretty, but I am pretty efficient on how I get it done,” he said. “They said I would be a liability on the base paths. They saw my running and didn’t believe I would be an asset in that area. That was tough.”

So Biggins immersed himself in golf. And he excelled at it.

“I put all my energy into golf because the number on the scorecard says how good you are and not someone else’s opinion,” Biggins said.

Biggins loved the game so much that he decided to pursue a career in golf management. He played collegiately and graduated from Methodist University, a professional golf management school in North Carolina, as a Class A PGA professional and embarked on a teaching career.

Biggins said he is fortunate in that his form of cerebral palsy only affects his legs and lower back.

“I have friends that it affects all four limbs and it also affects their speech,” he said. “It’s a wide array, but most people are still able to play and excel in golf.”

Now in his 10th year at the Country Club of Birmingham, one of Alabama’s premier clubs, Biggins specializes in coaching junior players.

“I love working with them and helping them achieve their goals,” he said.

Biggins calls having cerebral palsy “his secret weapon” when it comes to teaching. But he’s not vocal about it.

“I don’t really try to do it or even say, ‘Hey, I can do it and I have a disability,’” he said. “I go about my business and they see me limping around the golf course and playing well. I lead by example that way and try to emulate my ‘no excuses mantra.’

“We have a great group of juniors here at the club and the students kind of see that we work really hard and that I worked really hard growing up,” Biggins continued. “I try to instill that ‘work hard for your goals’ mentality. Even when it’s tough, and especially when it’s tough, that’s when winners are born.”

US Adaptive Open a ‘game-changer’

The 30-year-old Biggins said the US Adaptive Golf Open is a game-changer for golfers with different types of challenges.

“Now, we have something to play for, thanks to the USGA” he said. “Adaptive golfers aren’t just good golfers with disabilities, but they are good golfers, period. They are great golfers, and so it’s going to be extremely impressive to watch them play and how they adapt with their disabilities.

“Whether it is a guy with one arm, or a visually impaired golfer or a golfer who is paralyzed from the waist down or with a prosthetic leg or a neurological disorder like myself, everyone has found a way to adapt to their disability,” Biggins said. “They hit that little white ball 250 yards and get it in the hole as fast as anyone else, probably even better than most able-body golfers.”