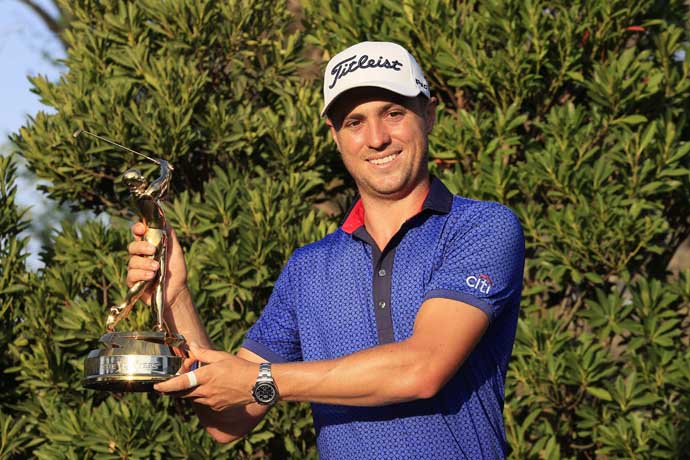 Former University of Alabama golfer Justin Thomas cashed a huge check Sunday, while two other players with ties to Alabama added money to their bank accounts by virtue of their finishes at The Players Championship.

Justin Thomas went 64-68 on the weekend to win by one shot over Lee Westwood on the TPC Sawgrass Stadium Course. Thomas finished at 14-under-par 274.

With the win, Thomas earned a massive $2.7 million. A four-hole stretch Sunday in which he went birdie, birdie, eagle, birdie vaulted Thomas, who turned pro in 2013, into the lead over Westwood, who led after 54 holes.

For Thomas, the victory ended a stretch of turmoil in which he was caught on a live microphone uttering a slur, the death of his grandfather, and concern for his close friend, Tiger Woods, who is recovering from a serious injury in a car wreck in California.

“It’s been bizarre is probably an understatement,” he said in his post-round media availability. “It’s been a crappy couple months. I’ve had stuff happen in my life I never thought I’d have happen, and I mean, losing grandpa was terrible, and having to play a round of golf dealing with that, and then on top of that not playing well, it just was a lot, and it took a lot on me mentally.”

Justin Thomas said he had to get put all of that aside in order to get back to playing good golf again.

“That’s just the way that it was,” he said. “I had to figure it out and had to get over it, and if I wanted to come to these tournaments and have a chance to win, then I needed to suck it up and get over it. If I wanted to throw a pity party for myself or feel sorry for myself, there’s no reason to show up, and I can stay home until I feel like I’m ready.

“I felt like I was in a good enough head space where I could play. I just wasn’t playing well. And then once I wasn’t playing well, it was kind of snowballing. This week was huge to win a big championship like this in front of fans again, which is incredible. You know, it tested me mentally, physically, emotionally, and I’m very proud of myself for getting it done.”

The Miller Lite Scratch Tour opened its season March 6-7 at TimberCreek Golf Club in Daphne, Alabama, and a familiar face emerged with the Regular Division win.

The Senior Divison featured a fantastic finish, as Danny Spybey birdied the final three holes to overtake Emile Vaughan for the win. Spybey shot 72-67 to edge Vaughn (70-70). Richard Jeffers was a distant third at 148.

The next tournament is March 27-28 at Azalea City Golf Club.

Huntingdon College, located in Montgomery, shot 292-289 for a 581 total. Methodist finished at 580. Piedmont College and Guilford College also tied for second with Huntingdon, a small college that competes in NAIA.

Carson Whitton led the Hawks with a tie for 10th-place finish at even par 144. Three other Hawks players tied for 16th at 146 – Owen Burt, Peter Meilunas and John Gaal.

Emory’s Max Schwarz and Washington and Lee’s Pierce Robinson tied for medalist honors at 7-under 137.

PrevPrevious ArticleQuim Vidal Mora Named Player of the Week
Next ArticleCumberland Lake: The Man Who Turned it AroundNext