Cumberland Lake: The Man Who Turned it Around 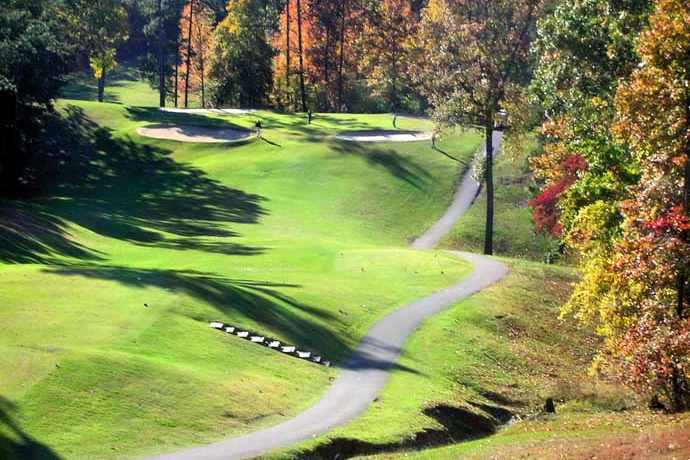 Cumberland Lake Owner is a Firefighter Who Sought 2nd Career

He Went Shopping for a Wedding Venue, Ended Up Buying a Golf Course

Imagine being retired at age 48. Now imagine retiring and buying a golf course for your second career. Sounds crazy, doesn’t it? Yet, it’s exactly what John Faler did when he bought Cumberland Lake Golf and Lodge in 2016.

Faler retired from his job as a firefighter in Hamilton, Ohio, north of Cincinnati, and bought Cumberland Lake near Pinson, Alabama, north of Birmingham. Little by little, Faler has been improving the course, which was in dire need of repairs  when he took over.

Now, nearly five years on, Faler sees light at the end of the tunnel and is confident in the direction Cumberland Lake is headed.

Several things played a role in Faler’s buying Cumberland Lake. In Ohio, he said, firefighters can retire at 48. So, he did.

“We wanted to move down south to a little warmer weather, so I started looking initially for wedding venues and that sort of thing,” he said.

“I didn’t realize how much the golf course market had plummeted to where a middle-class kind of guy could afford a golf course,” he said. “That was not the situation 20 years before that.”

Faler said he looked at a couple courses before targeting Cumberland Lake, a course that opened in 1968 and designed by Bill Amick. In 1996, Jeff Pate did some renovations on the 6,900-yard course, which features a variety of elevation changes, a smattering of creeks and bunkers, and an 85-acre lake.

The recession and a downturn in the popularity of golf had taken a toll on Cumberland Lake. Members took over ownership and the course was headed to auction when Faler stepped in. At first, it was a no-go. Eventually, Faler made the owners an offer they didn’t refuse and the former firefighter became a golf course owner. He did not disclose the purchase price.

Faler admits he wasn’t sure what he had gotten himself into.

“There was deep regret the minute I bought it,” he said, laughing. “The minute after I made the offer and they accepted, it became real. There was no going back.

“I had a pretty simple life up in Ohio,” said Faler who has 25 years in bar service and runs a special-event bartending service. “Everything was paid off and I had no financial issues.”

“All of a sudden, I have a gigantic overhead whether one golfer comes or a hundred. The lights still have to be on and the grass still has to be mowed, chemicals have to be applied,” he said.

“There is a lot of risk. I don’t regret it to this day, but I for sure was scared.”

Even though Faler is an avid golfer, owning and operating a golf course was uncharted territory. Five years after buying Cumberland Lake, he readily admits every day is a learning experience. It remains a no-frills operation.

“I would say I still do more work out on the course than I do inside,” he said. “In this environment, there is not a lot of money for hiring a lot of different types of managers. You could, but you probably would go under pretty quick.”

Faler said he had no idea of the scope of the job he was undertaking. Cumberland Lake had fallen into disrepair during the ten years the course had been leased out.

He encountered an irrigation system that was less than 50 percent functional, resulting in fairways being mostly dirt patches and greens that were substandard.

Faler quickly hired a superintendent and they spent the first winter fixing the irrigation system. Since then, the clubhouse has been remodeled. It now features a banquet hall that Faler hopes will attract a variety of functions, including weddings, to produce a non-golf revenue stream. He’s built a members’ lounge downstairs that features a golf simulator. There’s a patio and a pool next to the clubhouse.

A New Improvement Project Every Year at Cumberland Lake

“Every year, we have done small or medium-size jobs that improve the course without anything major,” Faler said. “We’re doing affordable, hard-work kind of improvements. Basically, when money comes in, I put it back into the course.”

The good news for Faler is that revenue was up in 2020, in part because the coronavirus pandemic led more players to return to the game or take it up.

Faler calls Cumberland Lake “a nice mid-level” golf course. Rates are $35 during the week and $42 on weekends.

“It’s a great piece of land,” he said. “It has beauty all over and the holes have a lot of unique qualities. I believe it can be a great mid-level course, and it’s getting there. I believe there is a market for that.”

Among his earliest challenges was Cumberland Lake’s reputation. He had to overcome past bad reviews still floating around the Internet from before he bought it. “Our review rating is pretty good now,” he said. “It has taken a lot to get them back up.”

He’s trying to expand the course’s customer base. Most of Cumberland Lake’s play comes from nearby communities, but Faler hopes that as conditioning improves, it will draw more play from outside the area.

Faler is seeking to improve the banquet hall business. He’s also implementing hiking trails along the course’s perimeter in an effort to spur more interest.

Five years into the venture, Faler has no regrets. “It’s been pretty exciting. There’s been stress, but I wanted a new chapter in my life. If I had regrets, I’d probably have it up for sale. And, I have not entertained that thought ever.”