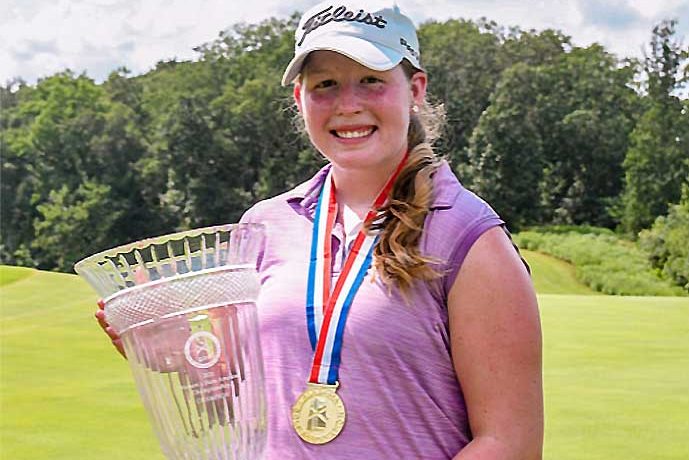 The last time Taylor Trible visited the Robert Trent Jones Golf Trail at the Shoals and played the Schoolmaster course, it was 2018 and she was an up-and-coming player on Spain Park’s girls varsity golf team.

On those two days in May, Trible shot 89-82 as Spain Park finished in third place in the Class 7A division.

It capped a long three days for Trible, who finished seventh in the qualifying round and then won four straight matches to take the championship.

“It’s cool. I have never experienced this,” Taylor Trible said. “I played the best I could and I worked really hard. I guess it showed out there.”

Trible, who plays at Greystone Golf and Country Club in Birmingham, works with Brian Speakman.

Where Does Taylor Trible Go from Here?

Trible has four more tournaments on her schedule in the upcoming weeks, including representing Alabama in the Southern Junior Cup matches.

The championship match went to the final hole. When Davidson missed a birdie putt from about 18 feet, Trible needed only to two-putt for the win after just missing her birdie try.

For the 14-year-old Davidson, it was another case of coming close to winning. She now has three runner-up finishes in Alabama Golf Association events this summer. Previously she was second in the state girls championship and then again at the women’s stroke-play championship.

She was medalist in the qualifying round with a 3-under-par 69 and was trying to go wire-to-wire.

“My expectations coming were to have fun and do the best I could,” she said. “I did that, so it was a good week.”

Davidson, playing the RTJ’s Schoolmaster for the first time, said she had a good week on the greens and with her short game.

Reflecting on her three runner-up finishes, Davidson said she played good golf in all of them.

“I could have made a few better decisions, but I can’t hang my head too much,” she said.

Like Taylor Trible, Davidson also will play in the Southern Junior Cup matches.

On the Senior Side…

“I’m trying to get back into competitive golf now, after not playing for a couple of years,” Hartwiger told alabamagolf.org. “I see this as a challenge between me and myself. This week was good, I feel better!”