Charles Barkley Has a New Lease on His Golf Life 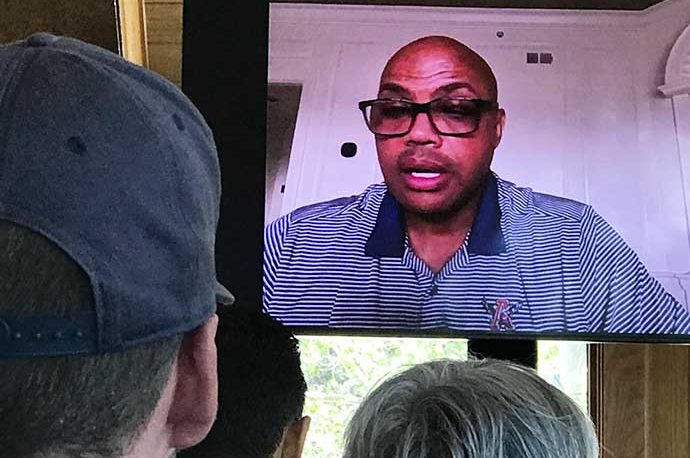 Charles Barkley was holding court with the media and assorted guests via a Zoom call in early June.

As usual, he had most everybody watching laughing as he talked NBA playoffs and golf – not necessarily in that order – drumming up publicity ahead of this weekend’s American Century Championship celebrity golf tournament.

Eventually, Barkley got down to the business of talking about his golf game. When told what the odds were on him to finish in the tournament’s top 70, the former Auburn basketball great and NBA legend guaranteed he’d win that bet.

That new-found confidence is a sign of the improvement Barkley says he has made with his golf game. Barkley’s game – or lack of one – has been well-documented throughout the years. From a three-piece, pause-halfway on the downswing, to a televised series working with acclaimed teacher Hank Haney, Barkley’s game has been mocked and the subject of social-media memes.

Barkley, though, has a new lease on golf life after working with former PGA Tour pro and current teacher Stan Utley. He said he couldn’t wait to return to the Edgewood Tahoe Golf Resort for the tournament.

“The first thing I put on my schedule every year is Lake Tahoe. I have no idea how y’all do it, but Lake Tahoe is the only place that is not hot as hell in the middle of the summer,” Barkley said. “I’m playing really, really well. I have had a lot of improvement the last couple of years. My teacher, Stan Utley, we have really come a long way. I can’t wait to get there and show it off.”

Barkley admits there was no fun factor in his game. He showed up at the American Century Championship and other events to support their charitable endeavors.

“To say I have been struggling on the golf course is the biggest frickin’ understatement,” he said. “I just want to play and have fun. It hasn’t been fun for me in 25 years of playing golf. I only play in Lake Tahoe because I love coming there and with a couple of my friends in some other celebrity tournaments to raise money for charity. But it wasn’t like I was having a lot of fun on the golf course. I’m not going to even tell you that lie.”

Barkley said he didn’t even want Utley’s help when they first met.

“I’m not going to lie; I had pretty much given up golf,” he said. “Like I said, I’m going to play Lake Tahoe and if a friend wants me to embarrass myself at his charity event and raise some money, I can live with that because charity is the most important thing. I met Stan – he said let me work with you a little bit.”

Barkley replied that he had already worked with “everybody in the world.”

Barkley did, and that began a renewed love of the game. Barkley said one thing Utley said to him clicked.

Utley asked Sir Charles, ‘How Many People are Talking to You’ While Over the Ball?

“Stan said something to me – when you stand over the ball, how many people are talking to you?” Barkley recalled. “I said, that’s a great question. I had never been asked that before. I’ve had 10 teachers – I had 10 different people talking to me at the same time. He said let’s just work on one thought. Don’t work on anything else. After about three hours of hitting balls, I was like, ‘Wow.’ Then the next day he said let’s think about another thing today. He just calmed my brain down. You can’t think about too many things over the ball.”

“It is so much more fun to go out and hit a bunch of good shots,” he said. “I feel really good about where I am. I have to keep working harder. I just want to play well and have fun.”

Charles Barkley, who grew up in Leeds, Alabama, never even thought about playing golf until he landed an NBA contract with the Philadelphia 76ers. His third year in the league, teammate Andrew Toney invited Barkley to go to the course.

“He asked if I wanted to go and I said, ‘Hell yeah, I don’t have anything to do today.’ I got on that range and I couldn’t hit that damn ball. I’m like an all-star and I can’t hit something that is standing still.”

But Charles Barkley had caught the bug, calling golf awesome and he started playing regularly. He said at one point he was a single-digit handicap player

“The next thing I know I got 10 voices in my head standing over the golf ball and I went from breaking 80 to not being able to break 100,” Barkley said. “It was like that for 25 years. It was frustrating.”

And then Utley the author of a series of golf books all with the title “The Art of…,”came along. Utley changed his perspective and his swing. More importantly, he rediscovered his passion for the game. Now, he just enjoys playing and the getaway it provides.

For Charles Barkley, Golf and Fishing are His Only Places of Quiet

“When I am on the golf course, I am out there with three of my friends. There’s a lot of trash talk. There’s nothing like it for four or five hours. Let’s be realistic – it’s one of the few things you can do as you get older. You can’t go out there and play basketball or football or baseball, but you can play golf and it is fun. Every course is different. It’s just nice to be walking out there, especially on a beautiful day. That’s why I love it so much.”