Ryan Winther, long driver, has gone the distance, and then some 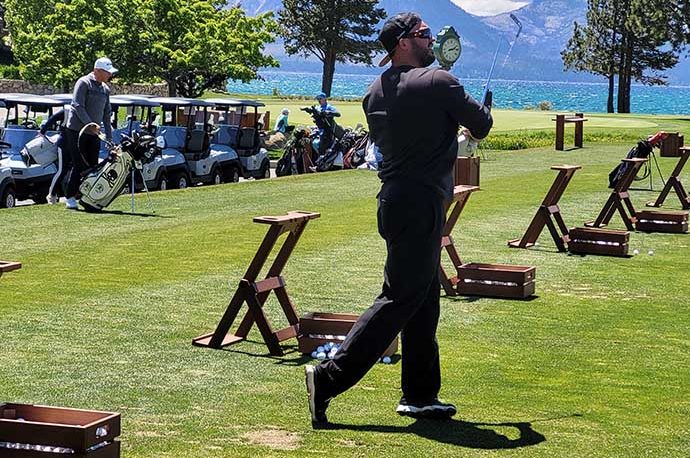 Sometimes a guy’s nickname tells you all you need to know about him. Former Long Drive Champion Ryan Winther, the host of Driven Golf Show on NBC Sports, is known as “Manbear.”

That seems about right for a former World Long Drive champion. His physique is chiseled and his arms are massive. It’s no wonder he can knock the stuffing out of a golf ball.

A former professional baseball player, Ryan Winther, played in the Tampa Bay Rays, Colorado Rockies and Kansas City Royals organizations before retiring, has been in the Guinness Book of World Records for the fastest drive, registering 217.1 mph in 2013.

He spent nine years on the long drive tour, winning the world championship in 2012 in Mesquite, Nevada. Now, he’s morphed into a variety of other ventures, including his TV show with Isaac ‘Sasquatch’ Sanchez.

Like Other Long Drivers, Ryan Winther Shifted from Baseball to Golf

Alabama Golf News caught up with Winther at media day in June ahead of the recently completed American Century Championship at the Edgewood Tahoe Resort on Lake Tahoe. Because we all are chasing distance with our swing, here’s a Q&A with Winther with a tip on how to improve your swing speed and get more distance.

AGN: How did you make the transition from baseball to golf?

Ryan Winther: I retired from baseball at age 25 ½ and I started golfing about six months later. I had a friend who was still playing for the (Arizona) Diamondbacks and we took him out for his birthday in 2007. I got hooked – I think I played every day for a year or a year and a half. I started long driving in 2009.

AGN: How did the long driving come about?

Ryan Winther: Being a top athlete in baseball and being developed at a young age, I was able to swing a bat really hard, really fast. I was hitting at a driving range in Sacramento (California) and met a guy who had been doing long drive named Dan Boever. He came up to me and asked if I had ever seen long drive competitions. I told I had seen it on TV, and that’s how it started. I met him a couple days later and he brought a couple drivers out and I started practicing. I got hooked on that just like I did golf.

Ryan Winther: Officially ,my longest drive ever is 545 yards. I did that on the Gateway Tour in Arizona – an actual golf tour when we were kind of sampling that. Unofficially. 575 is my longest at Wolf Creek on No. 1 in a pro-am. It was about a 30 mile per hour downwind, and I was pin high on the par 5. That was fun.

AGN: Is there more room for distance in your game?

Winther: Obviously, up here in Tahoe I’ll hit 380 to 460 out here, but if it is wind-aided you can go a little bit further. Without wind, it’s pretty tough to go farther.

AGN: Why has the long drive not carried over to having a ton of success on the PGA Tour?

Winther: It’s an entirely different sport. You are swinging as fast as you possibly can. Let’s say you practice 40 hours a week, you practice driving. You don’t have time to chip and putt. Guys like Sasquatch (Isaac Sanchez), they spend 40 hours a week chipping and putting. We are like a home run derby or a slam dunk contest. We are like a halftime show – completely different sports.

AGN: Is Bryson DeChambeau’s search for distance maybe changing that? Could that change in the near future?

Winther: Long drivers have been training a certain way for a long time. Bryson DeChambeau, what he did was notice that he wanted the distance. So, he started training with Kyle Berkshire, another world long driving champion. They have become good friends and are doing a lot of training. It’s about swinging as fast as you can and learning how to hit it straight. The bigger Bryson gets and the longer he hits it, the better it is for us because that is what we have been doing for a long time.

(Editor’s note: This piece was posted on the first day of The Open as DeChambeau made headlines by calling out his driver’s manufacturer, Cobra, for his poor driving performance. He said the driver he’s been using “sucks.” Cobra responded by saying that when an 8-yar-old says he hates you, he may not mean it.)

AGN: You have a lot going on with the TV show and other things. Where will golf take you next and did you ever think it would take you to where you are now?

Winther: I had no idea because I had never golfed before. And then I picked up a club and started setting some world records. I did it for nine or 10 years. I still do the events I want to do because I want to enjoy it. I like hitting at those specific grids. I like hanging out with my long drive brothers and sisters. I don’t tour full-time any more. We’ve been doing the TV show. We have some bigger filming opportunities coming up next year. We’re developing a product. We are definitely staying busy so we can monetize our accomplishments. We don’t want to stay in that specific area – we want to branch out and see what we can accomplish.

AGN: What is the best way for somebody to pick up speed in their driver?

Winther: It’s development. There are certain things you can do to maximize what you are working with. You can tee the ball up a little bit; you can lean back a little bit. The thing I started that helped me set four Guinness Book of World Records – I swing as fast as I can and I learn how to hit it straight. That is what Bryson is doing. He will go hit 400 balls with his driver just swinging as fast as he can. What that does is build up those fast twitch muscles. It’s like going to the gym. Say you want to bench press 500 pounds. It’s not going to be one tip. You have to constantly add a little bit of weight. You have to constantly add a little bit of speed every time you train. Before you know it, you are swinging 10 miles and hour faster. You have to train for speed.