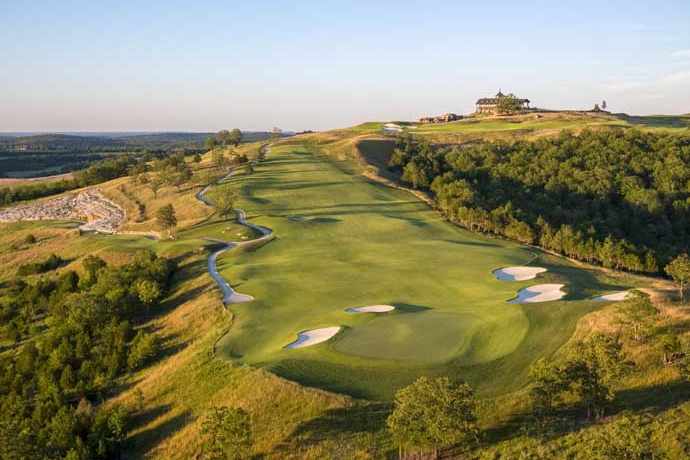 Tiger Woods, the GOAT of professional golfers, is about to add a new course – Paynes Valley – to his growing portfolio of course designs.

Payne’s Valley is his first public daily fee course. In the past, he has done a variety of private courses and resort courses. Payne’s Valley is Tiger’s tribute to the late Payne Stewart who was a native son of the Ozarks.

When it opens later this month, Tiger’s course will certainly get the same scrutiny as everything else in his life. Payne’s Valley will be the piece de resistance on a site that also features 18-hole courses Ozarks National and Buffalo Ridge, and short courses Top of the Rock and Mountain Top. They are all part of Missouri’s Big Cedar Lodge resort umbrella.

“(Branson) has always had golf courses, but I don’t think it has had any on this level,” said Matt McQueary, the Big Cedar Lodge director of golf sales and marketing. “I think this brings us into the fold when we talk about national golf destinations where you are willing to travel a little bit more to play, and I think this course – Payne’s Valley – is going to be a bucket list course.”


Being tourism-centric, Branson has plenty of options when it comes to accommodations. From condos and lake cabins to hotels and motels, there is no shortage of places to stay.

One of the best, however, is the Hilton Branson Convention Center. It is conveniently located in the heart of downtown Branson and within easy walking distance of many of the shows and the ever-popular Branson Landing that features a wide variety of shops and restaurants.

The Hilton Branson Convention Center has 294 rooms, onsite dining and two bars, an indoor pool and an outdoor pool, a fitness center and it’s a short drive away from most of the area’s golf courses.

The 13 holes that were open for preview play in July and a tour of the five remaining holes that will render the course ready to open Later this month – will certainly bear out Payne’s Valley becoming a ‘bucket list’ course. Everything about Payne’s Valley is expansive. The fairways are spacious and the greens are enormous. It is challenging and fun and difficult and scenic all wrapped into one course.

There’s even a 19th hole – a par-3 currently under construction leading to the clubhouse that overlooks the 18th green in a spectacular setting.

Big Cedar Lodge is about an eight and a half-hour drive from either Birmingham or Huntsville. The nearest airport, Springfield-Branson, is served by American, Delta and United.

“We certainly have high hopes for it once the ranking come out and people travel from all over come to play it. I think expectations are low for people traveling from the East Coast or the West Coast coming to the heart of the Midwest to play a golf course, but I think they are going to be surprised,” McQueary said.

You wouldn’t expect anything with Tiger’s name on it to be low-key, and Payne’s Valley certainly has a bigger-than-life quality. What’s key, however, is that all three 18-hole courses under the Big Cedar Lodge umbrella are distinctly different.

“The difference compared to Buffalo Ridge and Ozarks National is that Paynes Valley stands out in its look and even in the way it plays,” McQueary said. “The style of sand, the style of Zoysia grass, the strand of zoysia grass is different. You go to some destinations and the courses generally look the same from photograph to photograph. You might have to know what you are looking for to tell them apart.

“Here, you take a picture of a hole and you pretty can tell which course it belongs to – whether it is the par 3s or even the whole 18.”

McQueary said Tiger has been hands-on during the building of Paynes Valley, making several site visits and being involved in the conceptual design of the course that will play 7,308 yards from the tips. The 19th hole will be a 202-yard par 3 from the back.

“From what I have been able to see, he has been very involved on the conceptual side,” McQueary said. “He is not usually here overnight. He’ll fly in – you’ll see the TW jet kind of flying in low and landing at the airport. It’s usually a half day.”

Woods made a site visit last fall shortly after undergoing knee surgery but still walked the entire 18 holes, including the final five that had yet to be sodded.

“He literally walked 14 and he decided he didn’t like the bunker on the left side, I think because the next hole has a bunker on the left side,” McQueary said. “On the fly, he took a piece of paper and scratched through this concept of changing the hole entirely and passed it on to his No. 2, who is Beau Welling, who was Tom Fazio’s No. 2 for years.”

The result is that No. 14 now has a bunker on the right side of the fairway.

“Tiger sees it as conceptual – this is how I like to play but I want it to be playable for amateurs,” he said. “This is what I see in a hole and this is what I want players to think about on their shots, and then Beau Welling and his team come in makes it a reality considering the drainage and all the things that go into making the golf course.”

McQueary said Paynes Valley will hold a unique appeal in that you can play the course from one set of tees and it will beat you up, or play another set and have an enjoyable, fun-filled round in which you can shoot a good score.

“I think the average golfer is kind of tired of getting beat up,” he said. “You are coming here to play maybe one round – you aren’t playing your whole career here – and do you want to get your butt handed to you for 18 holes or do you want to have fun and keep the ball in play. If you are a decent golfer and you can travel to play, this is a course that you can probably come and play and shoot a pretty decent score on.”

Paynes Valley will officially open on Sept. 22 with a televised charity match between Tiger and Justin Thomas against Justin Rose and Rory McIlroy.