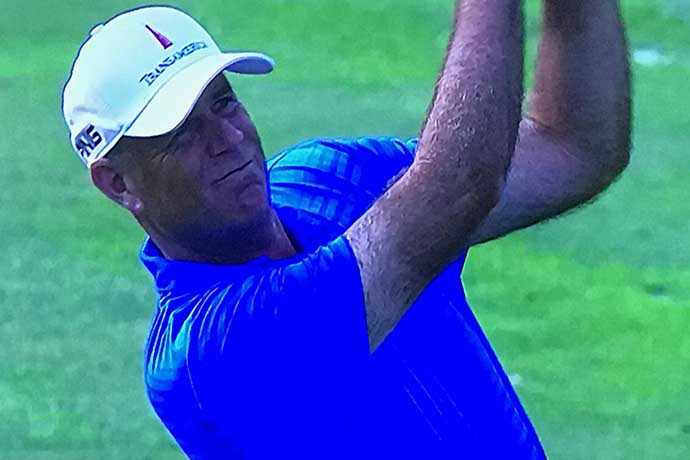 Battled Emotions Through the FInal Round

With his wife Lisa walking outside the ropes and son Reagan on the bag, 47-year-old Stewart Cink proved Sunday he still has what it takes to win on the PGA Tour.

Cink capped a weekend in which he shot 65-65 with a short birdie putt on the 72nd hole for what turned out to be a two-shot win at the Safeway Open in Napa, Calif.

His winning total was a tournament-record 21-under-par 267 and was worth $1.18 million. Harry Higgs finished second at 269.

It was Stewart Cink’s seventh victory on the PGA Tour, but his first since the 2009 Open Championship in which he took down legendary Tom Watson in a playoff.

Cink didn’t need extra holes to win Sunday, instead emerging from a crowded leaderboard with the final 65. His only stumble of the day came at No. 17 when he opened the door with a three-putt bogey that took a three-shot lead down to one over Higgs.

But Cink knocked his second shot into the back fringe on the par-5 finishing hole. He made a short putt for the birdie that clinched the win.

Cink said he battled his emotions throughout the final round while trying to snap his 11-year winless drought.

“The emotions, yeah, I definitely had a lot of emotions out there today,” he said in his post-round news conference. “I just was overcome at a few times with a feeling of gratitude and just feeling like how fortunate I am to be in the position that I’m in. We call it the bullets are flying out there. You know, last four or five holes of a PGA Tour event your name’s on top of the leaderboard, but think about it, I’ve got my son caddying for me, my wife is in almost five-year remission now and she’s walking out there just on the side of the ropes, and at 47 I’m able to compete at the highest level and now not just compete, but win.”

It has been a long road back to the winner’s circle for Cink, the former Florence resident who is a Bradshaw (now Florence) High School graduate. Wife Lisa battled breast cancer, which is now is in remission, and he has had his own health issues – a skin cancer scare, a creaky back and shoulder issues.

Close but No Cigar – Until Sunday

He occasionally found himself in contention in recent years, but couldn’t break back through for a win until the Safeway.

Chad Parker, a longtime friend of Cink’s, said Stewart told him that even as he got older he still had a strong desire to compete and play.

“He doesn’t want to go out quietly, if you will,” said Parker, who is the general manager at the East Lake Golf Club in Atlanta that hosted the PGA Tour Championship last week. “He still has the fire to play. If you look at some of the decisions he made personally so he has time to do that, it’s a sign that he is serious about it.  He’s worked hard – he’s always been a great player but he continued to work hard on his swing.”

The only member of the Cink family who was not at the tournament was his oldest son Connor. But Stewart gave him a shout-out after the tournament, noting it was Connor’s birthday.

Chip-in on No. 11 Kept Momentum Going

Cink moved up 19 places with Saturday’s 65, but he was still two shots off the lead heading into the final 18. Doc Redman took the early clubhouse lead by shooting 62 to finish at 18-under, but with most of the leaders early in their final round it was almost a certainty that his lead would not hold up.

Stewart Cink caught Redman with back-to-back birdies to close out the front nine and then took the outright lead with a chip-in birdie on No. 11. Although much of the post-round chatter was about the two shots he hit on the final hole, Cink pointed to the chip-in from in front of the green as a crucial shot.

“When you’re looking at that hole from the tee, you see nothing but trouble short,” he said. “My ball landed just short of the green on the fringe and it trickled back down. It’s a tough little shot because you can’t hit it hard enough to get it in the air and there’s no green to work with, but I got down there and my ball was on the most beautiful, perfect lie. The chip basically became so simple that all I had to do was treat it like a putt and catch it on the clubface somewhere. You don’t expect to chip in, but you throw up a grenade and when it explodes, you see where the shrapnel goes and right there it went in the right place. It was a little bit of an omen. I felt like I needed to get that ball up and down to keep my momentum, and when it went in the hole I just felt like, okay. I turned to Reagan and said, ‘Let’s get five more birdies.’

“That didn’t happen, but we gave them a chance. I just felt like that was a really big moment there that propelled me into like a real like lockdown type of focus.”

None of the chasers made much of a move on the back nine, and when Stewart Cink poured in a birdie putt from the back fringe on No. 15 and added an 8-footer for birdie on No. 16, he was suddenly three shots ahead.

That lead quickly dwindled to one, though, when he bogeyed No. 17 to fall back to 20-under and Higgs, playing in the group behind, made a spectacular shot on No. 16 to set up an eagle to get to 19-under.

Higgs missed a short birdie putt on No. 17 and could only make a par on No. 18 after driving into a fairway bunker off the tee. Needing an eagle to tie, Higgs hit his third shot right of the hole and Cink had the win.

Cink said except for the second round in which he shot 70, his week at the Safeway was some of the best golf of his career.

“I was clear headed and calm and that’s an area where I kind of have struggled over the years,” Cink said. “I think having Reagan on the bag and I saw James Sieckmann, my coach, earlier this week who helped me out a lot in that area, too. I had a lot of good sort of vibes. It felt like it was — it just felt like the right place for me to be up near the top of the leaderboard. Then when it came time for me to kind of wrestle the bull to the ground, we were able to keep our composure, me and Reagan both — at least it looked like it on the outside — and get the job done.”

With the win, Stewart Cink gets a two-year exemption on the PGA Tour and also gets into the field for the 2021 Sentry Tournament of Champions, The Players Championship, the Masters, the U.S. Open and the PGA Championship.