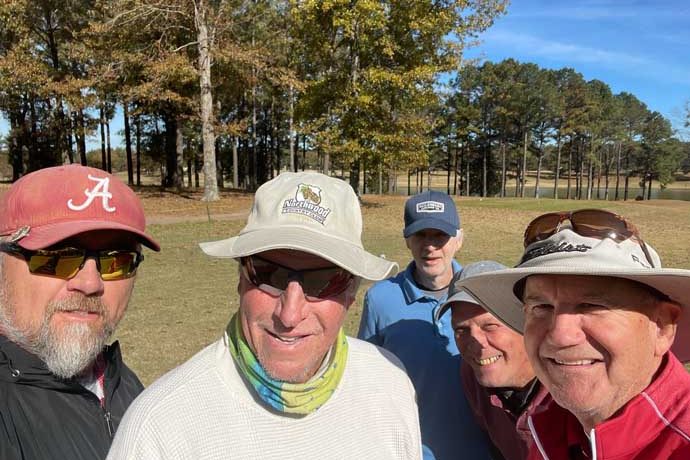 For those fortunate to make a hole-in-one, it’s always an unexpected treat. The shot provides a memory of a lifetime and a story to be told over and over again.

So, let me tell you an amazing hole-in-one story about a golfer in Tuscaloosa, Alabama.

On a recent November Saturday, Dereck Wyatt was playing 18 holes at Ol’ Colony Golf Course, which is his home course.

Wyatt and his playing partners reached the 17th hole, a good, downhill par 3 that was playing 137 yards to a front pin.

Wyatt is an accomplished golfer who says he has a 1.6 handicap index. On that Saturday he was playing in a fivesome that included Todd Peebles, Dick Gardell, Ron Aldy and Jan Kizzah.

Hitting third, Wyatt pulled his Apex 9-iron, stepped up to the blue markers and teed up his Callaway Chrome Soft golf ball.

Seconds later, the 55-year-old Wyatt watched as the ball took a bounce, plopped onto the green and rolled into the hole for a hole-in-one. Shouts of joy erupted among the other members of his group.

“Everybody started jumping up and down and hollering,” Wyatt said recently. “It had been a long, long time since I had one. You know, it’s kind of like you aren’t trying to make a hole-in-one; you are just hitting the ball.”

Wyatt also had a confession.

“To be honest, I didn’t think that I caught it that good,” he said. “It wasn’t one of those shots where you think you hit it good and it might go in.”

Even though it had been a while since Wyatt – who owns a computer company – had made an ace, he was no stranger to making the shot of a golfer’s lifetime. In fact, that Saturday ace was his fourth.

“Two of them came at a course that is no longer there,” said Wyatt, who estimates he has been playing golf for between 25 and 27 years.

It also was his second at Ol’ Colony.

Of course, even though making a hole-in-one is quite the accomplishment, it’s not uncommon. According to the National Hole-in-One Registry, more than 128,000 aces are recorded each year – an average of about one per every 3,500 rounds.

For Wyatt, though, his ace on that fall Saturday round at Ol’ Colony was just half the story.

The unusual part of this hole-in-one saga came in his next round at Ol’ Colony on the very next day and on the very same hole. Only this time, the hole was playing 150 yards.

Playing in a foursome that day, Wyatt arrived at the tee box along with Peebles, Gary Cook and O.V. Garner. On this day, the pin was positioned in the back left portion of the green – one of the hardest locations on the hole.

“The only way to get it close to that pin is to roll it over the corner of the green. It runs down at an angle,” Wyatt said.

Just like the day before, Wyatt pulled his 9-iron one. The swing was pure.

It wasn’t just a good shot; it was a great shot. The ball landed on the top portion of the green, crested the hill and tracked toward the hole.

You can guess what happened next – the ball found the bottom of the cup for his second hole-in-one in two days on the same hole.

“Both shots rolled into the hole like they were four-foot putts,” Wyatt said. “I couldn’t believe it. It was crazy.”

Wyatt said he wasn’t even thinking about a second ace in two days when he stood over the shot.

“I never even dreamed I could make another one,” he said. “We shot the yardage and said that we needed to play it short of the hill and let the ball roll over.”

Wyatt said he hit the shot on the line he wanted.

“When it rolls over the hill, it disappears for a few seconds,” he said. “When it reappeared, it was like it had a string on it, and it pulled it right into the hole. You aren’t really trying to make a hole-in-one, you are just trying to get it close and make a birdie.”

Unfortunately, Wyatt’s ace streak on No. 17 at Ol’ Colony came to an end in his next round later that week.

“I parred it,” he said. “I didn’t even really think about it. It just happened those two days, and that was my good timing for those two days. I’ll take the next one whenever it comes.”

Even though he didn’t make it three for three, Wyatt will always have a story to tell about that one weekend in November at Ol’ Colony.

And what a story it is.