Don’t overlook Mississippi when it comes to seeking good golf 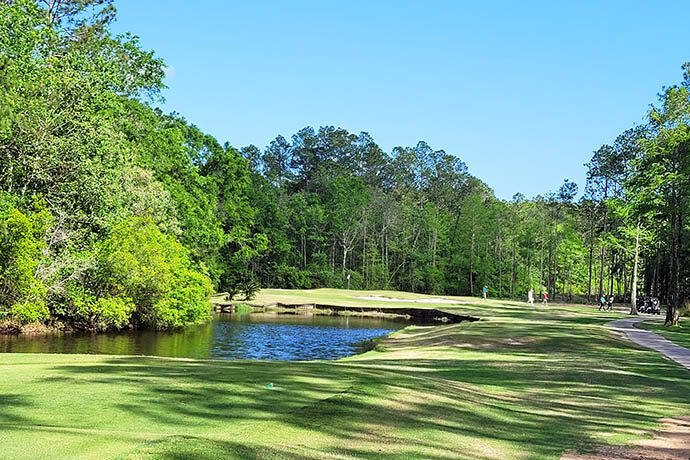 Don’t sleep on Mississippi when it comes to seeking good golf.

From north to south and east to west, Mississippi is home to some outstanding courses.

A recent trip to the Magnolia State started on the coast in Gulfport with rounds at Windance Golf and Country Club, the Club at Diamondhead and Grand Bear.

Those rounds were followed by a visit to the 36-hole Dancing Rabbit at the Pearl River Resort in Choctaw. Next up were rounds at two distinct public offerings in Jackson – Patrick Farms and the newly renovated Refuge.

For those wanting something different or just a little break from Alabama’s array of courses, Mississippi has a lot to offer and it’s just a short drive from Alabama or Tennessee.

Windance Country Club: Owned by the Island View Casino Resort since 2007 and designed by Mark McCumber, Windance is a fun, inviting course that doesn’t overwhelm a player with length or difficulty. From the tips, it measures 6,667 yards and plays to par 72 with a rating of 72.5 and a slope of 129.

The course annually receives high reviews and consistently is ranked by Golfweek as one of the best places to play in Mississippi. Golf Digest gives it a four-star rating, and Windance has hosted Nike and Ben Hogan [now Korn Ferry] Tour events.

Since being purchased by Island View, Windance has undergone a variety of renovations, including a state-of-the-art irrigation system, a new lake, native areas and decorative stone work.

One unique aspect of Windance is that the front nine features three par 3s . The par is 35. The back nine contains only one par 3 and is par 37. Players get tested right away, as Windance opens with a 396-yard par 4 followed by a 231-yard uphill par 3.

General Manager Mike Beyerstedt, a former fire chief, was a Windance member before hiring on. He said the second hole statistically was always ranked among the hardest holes on the course when hosting the Hogan and Nike tour events.

The Club at Diamondhead, Cardinal Course: The 1979 Earl Stone design is part of a 36-hole complex that features tree-lined fairways. From the tips it measures 6,729 yards with a rating of 72.4 and a slope of 131. If you don’t bomb it off the tee, the Cardinal course plays 6,128 yards from the white tees, while the gold markers check in a friendly 5,596 yards.

One of the Cardinal’s best holes is the 147-yard par 3 No. 7, which is guarded up the left side by native grasses. A front left position looks easier, but brings bunkers into play. Access to a back right pin requires a precise iron that makes it onto the upper of the green’s two tiers. The Cardinal course doesn’t have a ton of bunkers, but they are strategically placed and gives players something to think about.

Diamondhead’s Pine course opened in 1969 and also was designed by Stone. Diamondhead, located between Biloxi and New Orleans, offers a golf academy and excellent practice facilities.

Grand Bear: The name is a good hint at the course’s designer. Yep, Grand Bear is a Jack Nicklaus signature golf course and it is one of the best along Mississippi’s Gulf Coast.

This past year it hosted the PGA Champions Tour’s Rapsican Systems Classic. The course opened in 1999 and Nicklaus did a nice job routing the course through a myriad of pines and natural cypress wetlands framed by the Little Biloxi River and the Big Biloxi River. From the tips, Grand Bear maxes out at 7,204 yards with a 75.0 rating and a 142 slope. There are four other sets of tees, with the Brown Bear tees playing to a comfortable 6,221 yards.

As is the norm for Nicklaus-designed courses, the greens seem large and inviting. But there is a premium for accuracy and getting the ball on the correct potion of the green to avoid three-putts.

Dancing Rabbit at Pearl River Resort: Two courses that have earned national acclaim are located in Choctaw, where Tom Fazio and Jerry Pate collaborated on the Oaks and the Azaleas at the Pearl River Resort, which is just 72 miles from Jackson.

The Azaleas opened in 1997 with the Oaks following in 1999. The two consistently appear on top 100 lists of resort courses, courses you can play, best casino courses and greatest public courses.

While the landscapes are similar in that the routing takes players through holes cut among hardwood forest, the Oaks features several holes in which a carry over water is required.

Both courses have five sets of tees with the Azaleas topping out at 7,158 yards, while the Oaks stretches to 7,076 yards. From the middle (white) tees, both play in the neighborhood of 6,100 yards, although elevation changes can make several holes play longer than their measured distance. The Azaleas course has TifEagle Ultradwarf Bermuda greens, while the Oaks has Champion Bermuda on its greens along with Zoysia fairways.

The Azaleas course is often referred to as “the Augusta you can play” in part due to its beauty when the azaleas are in full bloom each spring.

Patrick Farms (Pearl): The Randy Watkins Golf Group features three courses (Whisper Lake Country Club, Lake Caroline Golf Club) in the Jackson area, including Patrick Farms, a fun semi-private course that won’t beat you up. It opened in 1999 and maxes out at 6,907 yards from the tips and plays 6,368 from the blues and 5,730 from the whites.

Watkins played the PGA Tour in the 1980s before getting into the design business. Kyle Sisk, the director of golf at Patrick Farms, estimates that the three courses do as many as 90,000 total rounds a year, including 30,000 at Patrick Farms.
“We’ve got a good product and we are proud of it,” Sisk said.

The Refuge (Flowood): Nathan Crace of Watermark Golf renovated this municipal course that first opened in 1999. He added a couple of new holes, rerouted the layout so that it turns at the clubhouse and did extensive tree and brush removal to open it up and make it more playable.

The Refuge plays 7,013 yards from the tips and 5,698 yards from the middle set of five tee boxes. The ninth hole is a par 5 that plays back toward the pro shop and offers a nice view of the new Sheraton Flowood The Refuge Hotel and Conference Center.

For a more extensive review of the Refuge, check out this story.

Where to stay while playing golf in Mississippi

Gulfport: The View Casino Resorts features two separate hotels and casinos – Beach View and Island View – connected by a walkway. The Beach View side is smoke-free, both in the rooms and in the casino. Island View allows smoking. Combined, the property has 970 rooms, including 80 suites. There are numerous dining options to choose from ranging from grab-and-go to upscale.

Choctaw: Not only does the Pearl River Resort offer two outstanding golf courses, but it has three options for accommodations. The Golden Moon Hotel and Casino features nearly 600 elegantly decorated rooms and a 70,000-square foot casino that includes a sports book. The Silver Star Hotel and Casino has 500 rooms and a 90,000-square foot casino, while the Dancing Rabbit Inn is a quaint spinoff hotel in the heart of the resort. The resort contains 10 dining options – including the upscale Phillip M’s, two sports bars and several other casual restaurants.

Jackson: The Sheraton Flowood Refuge Hotel and Conference Center is a great option in the Jackson area for a stay-and-play visit that opened in 2021. With 196 rooms, a rooftop bar with an outstanding view of the surrounding area and great sunsets, and several dining and bar options. Amenities include a pool and lazy river and fitness center. The Jackson-Medger Wiley Evers International Airport is just minutes away and is a centralized location to start a Mississippi golf trip.

What else to do on a Mississippi golf trip

Mississippi Aquarium: Located in Gulfport, a visit to the two-year-old Mississippi Aquarium is both educational and entertaining for youngsters and adults. The indoor/outdoor campus features 12 fresh and salt water habitats and over 200 species of aquatic animals including bottlenose dolphins, North American river otters, sharks, stingrays and more. There’s also an aviary exhibit.

Geyser Falls Water Theme Park: Need to unwind after getting beaten up by Dancing Rabbit’s two excellent golf courses? A visit to Geyser Falls on the Pearl River Resort property is for you and the kids. Its 23 acres contain water slides, a lazy river, a beach and palm trees. A perfect place to end up after golf at Dancing Rabbit.