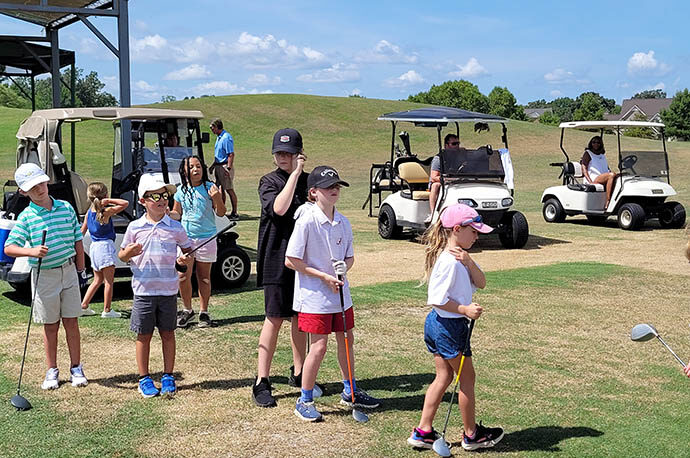 Lee Hodges has been a boost for the club's program

ATHENS – One by one, youngsters teed up their golf ball and took a mighty lash at it.

Sometimes, they swung and missed. Other times, it took off and went pretty good – a hundred yards or so – as their parents looked on eagerly.
A long drive contest was the perfect way to end a Wednesday morning of the Canebrake Golf Club’s third summer junior golf camp session.

Canebrake’s director of golf Micky Wolfe watched from a golf cart as a couple of his assistants oversaw the day’s activities. With each swing, they offered encouragement to the campers.

Later that afternoon, Wolfe and the club’s PGA Jr. League team were headed from Athens east to Huntsville to compete.

The camp, the PGA Jr. League and other activities geared toward junior golf is Wolfe’s way of keeping the club’s unofficial motto – “Come to Canebrake; we build champions” – alive and well.

Wolfe has been at Canebrake for 12 years and that’s how long he has been building the junior program, which is designed for the club’s members and also those who live in the surrounding Canebrake community.

“We built it really from scratch,” he said. “We would have three or four or five kids – three of them being mine – that kind of started the junior program. Over time, I think the parents saw the importance of what golf could play in their lives as far as just being a functional adult. As time has gone on, we’ve had a chance to produce a lot of really good junior golfers.”

Of course, it’s easier to attract participants when there are role models that have come through the program. Lee Hodges, who is now on the PGA Tour, came through the junior program at Canebrake. Nick Dunlap, one of the top junior amateurs in the country who is headed to Alabama to play college golf, isn’t a graduate of the junior program but has been visible at the club after his family moved to Madison a couple of years ago.

Recent Alabama State Boys Champion Jackson Mitchell came up through Canebrake’s junior program. Having players like that make it easy for Wolfe and his assistants to use those players as examples of what those youngsters can aspire to be as they grow older.

“People say, ‘Hey, man, you are doing a great job with this,’ and ‘Y’all are doing amazing,’” Wolfe said. “I haven’t hit a shot. We have made it available and the membership enjoys seeing these kids work hard and not just work hard, but see the fruits of their labor.”

Wolfe estimates that in 12 years, 27 kids from Canebrake’s junior program have gone on to play college golf.

“Our 2023 class, we’ve got three Division I commitments – two to Alabama and one to Samford,” he said. “We’ve got another to UT-Southern.”

Wolfe points to Hodges as being the driving force toward the recent popularity of the junior program.

“They all started seeing Lee practicing and how that paid off,” he said. “Lee comes back and plays with them all the time. It means a lot to them. There’s a long history of really solid junior golf that has come through Canebrake. We’ve been able to take that and get more kids involved.”

He said when kids reach 12 or 13 years old, they decide if they want to pursue it to a higher level.

“We just make it available to them,” he said.

Wolfe credits his assistants for doing the bulk of the work, feeding off a program the director of golf developed when starting the junior program.

“We did it the same way every time and it works,” he said.

The program is designed mostly for younger kids. On this Wednesday, most of the 20 or so participants are between the ages of 6 and 10. The summer’s first session featured 27 kids. The second had 34 and the late-summer third session had 19.

Depending on how the calendar shakes out, sometimes there is a fourth session.

‘We try to keep the kids going year-round’

All sessions feature different youngsters. It’s basically an introduction to the game.
Wolfe tries to get the kids from the junior camp to join their PGA Jr. League. In the fall, they offer an academy.

“We try to keep the kids going year-round,” he said. “The ones who want to be good know what it takes to be good. Being good is relevant.”

Again, Wolfe points to Hodges of an example of what can happen.

Wolfe said one key to the junior program’s popularity is that the parents and kids “feel wanted.”

“They feel like junior golf is a priority, and we make it a priority for sure,” he said.

“So many clubs that you go to junior golf is either in the way or something that will be done at 4:30 p.m. on Saturday. It’s never made a priority. That’s not every club but that’s a lot of clubs. We have made it a priority. The atmosphere at Canebrake is a family atmosphere. We want kids out here all the time.”