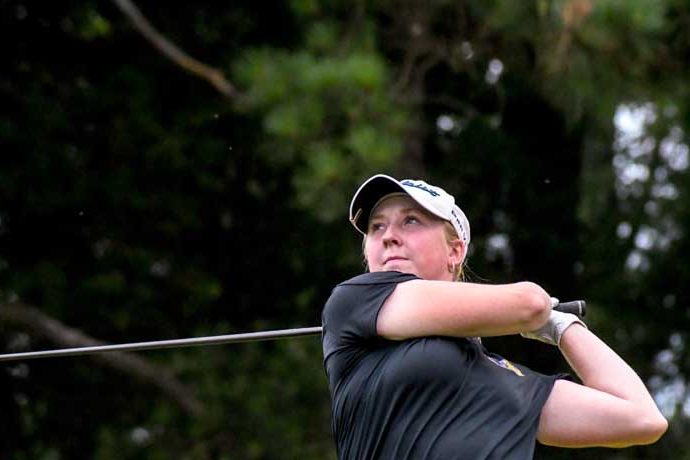 SCOTTSBORO – Locked in a tight battle with Molly Brown Davidson, Ally Williams knew she needed to go low in final round of Alabama Women’s Stroke Play Championship at Goose Pond Colony on Thursday.

That’s exactly what transpired too, as Williams shot a 3-under 69 to  to win the Alabama Women’s Stroke Play Championship by two shots over Davidson. The Brownsboro woman, who plays collegiately at Lipscomb University, finished with a 54-hole total of 6-under 210.

Davidson, of Auburn, finished at 212. Winning a scorecard playoff against Morgan Jones of Auburn, Michaela Morard of Huntsville shot one-under 71. Altogether, she finished with a 4-over 220.

Morard, of Huntsville, recently announced she was transferring from Alabama to Southern Cal to continue her college career.

But the day belonged to Williams, the younger sister of University of Tennessee golfer Michaela Williams.

“It feels really great to be named champion,” Williams told alabamagolf.org. “I hit it really well today. I made a lot of putts, got up and down when I needed to and hit it solid overall.”

Anniston’s Isabel Rogers shot 81 in the final round to win the tournament division with a 54-hole total of 256.

Donna Lowen of Huntsville won the 48th Alabama Women’s State Senior Amateur Championship, dethroning stalwart Kathy Hartwiger in the process. She shot 68 in the final round to finish at even-par 216.

Hartwiger led by one shot going into the final round and shot 77 to finish at 224. Susan West of Tuscaloosa was third at 227.

“I’m still in shock,” Lowen said. “It was a bogey-free round, four birdies and the rest were pars. I was really proud of how I played, I loved the course and I had a great group of ladies to play with.”

Olivia Iturbe won the Tournament Division at 233. Sarah Vandervoort of Montgomery was second, a shot back at 246.

Cullman’s John Lunsford shot 64 in the first round and then held on with a second-round 73 to claim the Alabama State Boys 13 & Under Junior Championship.

Lunsford’s 36-hole total of 137 edged 2020 champion Tyler Watts by one shot at Bent Brook Golf Course. Watts shot 69 in the final round.

“I had a lot of lows, and it was my play yesterday that carried me through to the top,” Lunsford said. “It feels amazing to be champion.”

Graham Patton of Tuscaloosa finished third, two shots back at 139.

In the girls division, Polly McCrackin of Hoover shot back-to-back 70s to finish at 4-under 140 and win by seven shots.

Julia Waldo of Prattville finished second at 147, while Frances Brown (148) was third.

“It was a pretty slow start on the front nine today, but once I turned the corner, I was feeling comfortable with my shots on the turn to the back nine,” McCrackin said. “It feels amazing.”