Catching Up with Isaac ‘Sasquatch’ Sanchez of The Big Break 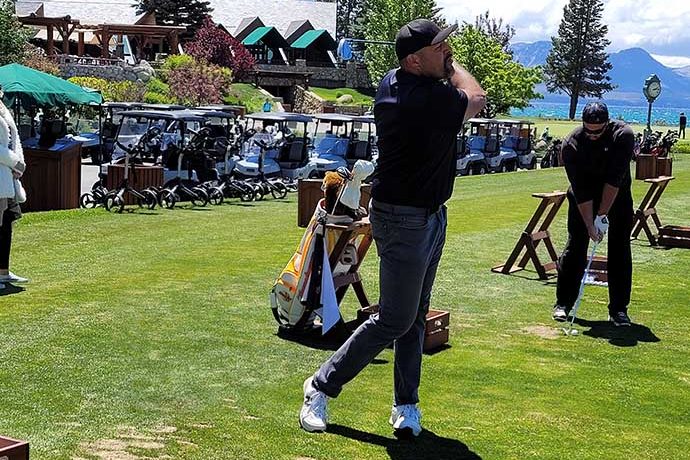 You might remember Isaac Sanchez from his two appearances on The Big Break, the Golf Channel’s long-running reality/golf competition. He first appeared in 2012 on The Big Break Greenbrier and returned two seasons later to participate in The Big Break NFL in Puerto Rico, where he won the competition with Jerry Rice and Emily Talley.

That earned him a berth in the St. Jude FedEx Classic.

It’s easy to see why Sanchez is known as “Sasquatch”. With a 6-foot-6 frame, Fu Manchu mustache and assorted tattoos. Sanchez forms an intimidating presence both on and off the golf course.

Although his Big Break win was nearly eight years ago, Sanchez remains active in the sport and recently was named head golf coach for the men’s and women’s teams at William Jessup University in California. He’s also a part of the “Driven Golf Show” team on NBC Sports.

Sanchez grew up playing golf on municipal and public courses, and he still embraces that aspect of the game.

Alabamagolfnews.com recently ran into Sanchez in Reno/Lake Tahoe and did a quick five questions with “Sasquatch”.

AGN: How did Big Break change your life?

Isaac Sanchez: It changed my life in so many ways. You put so much hard work into it and you are trying your best to get out there. And I wanted to play on the PGA Tour – I literally won an essay contest when I was 10 years old, and it was a week-long trip to a Billy Casper Golf Camp. I wrote about playing on the PGA Tour and ultimately winning the Masters. When I won Big Break NFL with Jerry Rice and Emily Talley, I got an exemption to play in the FedEx St. Jude Classic. All the prizes and all the stuff and money and things like that come and go, but to be able to fulfill a lifelong dream, it was what I wanted and what I worked for daily for 25 years. It couldn’t have been a bigger break from that standpoint.

AGN: You seem to enjoy playing golf among regular people and playing the munis. Why is that?

Sanchez: I love the everyday course. If it wasn’t for courses that had $2 junior rates – Mace Meadows and El Dorado Hills Golf Club, which is no longer open – was also $2. Those courses that are kind of munis or the ones people lovingly call ‘goat tracks’ are so important to the growth of the game. Having a place where somebody who has never played before as beautiful of spot as [Edgewood Tahoe Golf Resort] is, it can be a little intimidating if you are thinking about getting into the game. Here’s this big, beautiful golf course and it is expensive and there are all these different things you wouldn’t know if you are from the golf world. I love the daily fee courses and you can go out and play with your wife and kids or your buddies. You can go play nine holes and you can walk and have a great time. I love the every-man courses. I love them.

AGN: How have you taken your little bit of fame and enhanced the game?

Isaac Sanchez: I don’t think I have claimed to do that, but if I have, I hope it’s that somebody from my background who doesn’t look like your prototypical golfer and from my upbringing and my background can ultimately make it to the PGA Tour and make some kind of footprint in this game. If I can do it, anybody can do it. If I did do anything to enhance the game or show the golf world something, I hope it’s that I’ve shown golf is for everybody and it’s the greatest game. You can play it for all your life and it’s for everybody.

AGN: When’s the last time you paid a greens fee?

Sanchez: The last time I paid a greens fee was Memorial Day weekend. We are only a couple of weeks removed. Don’t get me wrong, I love the perks of playing free golf and how good that has been to me. But I also know and understand the golf side of it. On Memorial Day weekend and on one of the busiest days of the year from them and at an out-of-town place, I don’t want to call up the pro and ask to take some revenue from his course. I definitely still pay for my fair share of golf, but I do love free golf. It’s my favorite kind – free golf.

AGN: Best tip for an up-and-coming player or an old guy like me?

Sanchez: I actually did a clinic last week and I will steal this from Patrick Cantlay, who said he got this from Mr. [Jack] Nicklaus. Mr. Nicklaus said, “Patrick, have more fun on the golf course.” I think that is the universal principal that applies to everybody – even the guys who are playing for a paycheck and their financial well-being hangs in the balance. If it applies for someone at that level, it should apply to everybody. Go out there, have fun and realize how blessed you are to be out there.