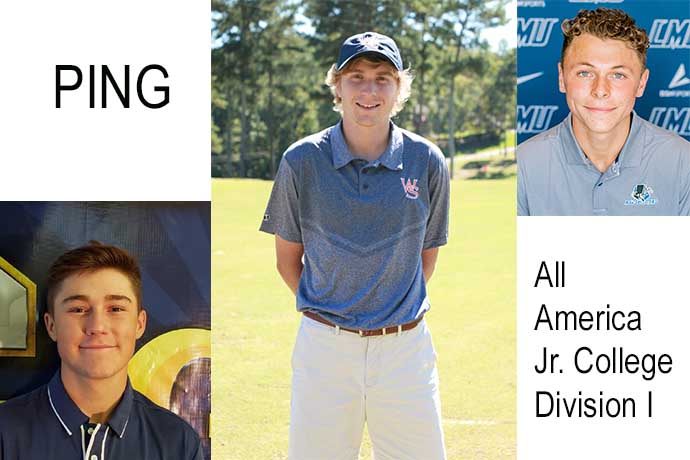 One player each from Central Alabama, Jefferson State and Wallace State-Hanceville earned NJCAA Division I PING All-America status for their play this past season.

Hayden Carner was a first-team selection, while Jefferson State’s Dillon West was named to the second team. Carter Goodwin of Wallace-Hanceville received an honorable mention.

All three had strong seasons and helped their teams to the national NJCAA Division I men’s tournament.

Jefferson State led teams from Alabama in the final standings with a ninth-place finish. Central Alabama was 11th and Wallace-Hanceville was 13th.

Carner, who is from Birmingham, won two events in his freshman season and notched five top-5 finishes. He also was named to the All-District 4 team and was the Alabama Junior College Athlete of the Year, as selected by the Alabama Sportswriters Association.

West, from London, England, transferred from Lincoln Memorial and played one season at Jefferson State.

He is the 24th player in Wallace State-Hanceville golf history to earn NJCAA Division I PING All-America status.

Goodwin has signed to play at the University of North Alabama next season.

Two other players from the state were named to the All-District 4 team. Tanner Guthrie of Central Alabama and Jefferson State’s Trey Rouse also were honored.