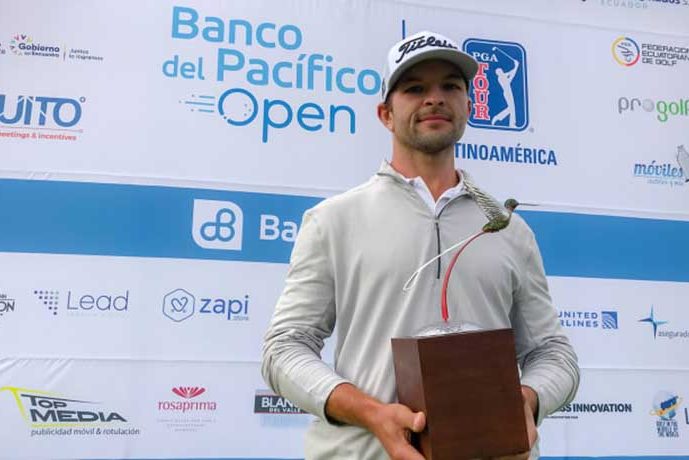 The road Conner Godsey has taken in professional golf has taken him to a lot of faraway outposts and resulted in a number of flirtations with victory.

On Sunday in another of those off-the-beaten path professional golf stops – Quito, Ecuador – Godsey, the former Lauderdale County High School golf standout, finally broke through for a victory on the PGA Tour Latinoamerica.

He did it in memorable fashion, too, erasing a six-shot deficit at the start of the final round and then making a 10-foot birdie putt on the first hole of a playoff to beat Drew Nesbitt. Godsey shot the day’s best round – a 7-under-par 65 – by two shots to vault from ninth place to the clubhouse lead. When Nesbitt, the third-round leader, finished birdie-birdie, the Banco del Pacifico Open went to a playoff.

Nesbitt couldn’t repeat his birdie on No. 18 in the playoff, opening the door for Godsey, who played two years at Wallace State-Hanceville and finished his college career at the University of North Alabama. The 29-year-old Rogersville native calmly drained his 10-footer for birdie to win.

Godsey earns $31,500 for the win at the Quito Tennis and Golf Club, but more importantly it all but locks up a berth on the Korn Ferry Tour for next season. The top five in the PGA Tour Latinoamerica points race earn Korn Ferry Tour playing privileges for 2022. Godsey previously played on the KFT in 2018 and finished 102 on the points list that season.

Godsey entered the Banco del Pacifico Open sixth on the points list, but vaulted to No. 2 with the 500 points he earned for the win. He is 167 points behind leader Brandon Matthews with one tournament to play. Godsey has been a consistent contender on the PGA Tour Latinoamerica this season, with a solo third, a tie for third, a tie for sixth and a solo 15th finish.

“I have been playing well all year. I just kept knocking on the door, feeling like it was eventually going to open and that’s what I did this weekend, I got it done,” he said.

Starting the final round six shots off the lead, Godsey he thought he needed at least a 66 to get into contention. He went one shot better by making nine birdies and two bogeys in the final round.

“Going into the day, I had a number of 6-under in mind. I felt that if I could shoot 6-under, I would be pretty happy with how I finish,” he said. “I made a lot of birdies and just tried to keep it going. (I) ended up shooting 7-under. I didn’t look at the leaderboard all day, but I knew I was up there close. Thankfully got in the playoff and got it done.”

Getting into the playoff was not a done deal, even though Nesbitt struggled for much of the day. Playing three groups ahead of the final pairing, Godsey posted 17-under and had to wait to see how things shook out. Jacob Bergeron was tied for the lead with three holes to play, but a double bogey on the par-3 16th hole took him out of the chase. Nesbitt was two back with two to play before finishing birdie-birdie to force the playoff.

The 18th hole where the playoff began is a 414-yard par 4. As he did all week, Godsey played a conservative 4-iron off the tee and found himself in the right rough with 185 yards to the pin.

“With the adrenaline I went for a pitching wedge full and flagged it right at it,” Godsey said.

Nesbitt hit his approach in a greenside bunker, leaving the stage for Godsey, who rolled in his 10-footer for the win.

“I just kind of stuck to my routine and made the putt,” he said.

Next up is the season-ending Bupa Championship presented by Volvo, at PGA Riviera Maya in Tulum, Mexico, July 22-25.

PrevPrevious ArticleThree Alabama Players Earn Juco PING All-America Honors
Next ArticleRumbling Bald: Cool Down in the Mountains of the CarolinasNext