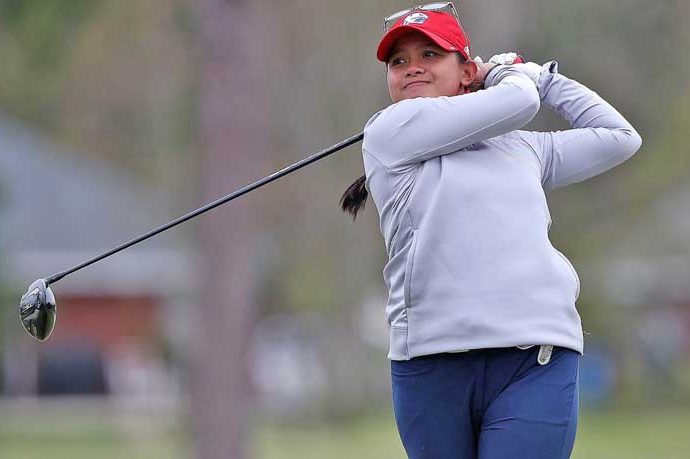 The University of South Alabama women’s golf team used strong second and third rounds to win its own Bama Beach Bash at the Gulf Shores Golf Club this week.

The Jaguars were five shots behind Central Arkansas after the first round, but closed with 291-297 to surge to a nine-shot win over Texas State and Louisiana-Monroe. The University of South Alabama Jaguars completed the 54-hole tournament with a score of 891.

Other teams from Alabama included UAB, which finished eighth at 934, North Alabama, which finished 12th at 960, and Alabama State, which was 14th at 981. Fifteen teams competed in the tournament, which was played in breezy conditions.

South Dakota State’s Teresa Toscano captured medalist honors by four shots over Chantel Dueringer of Louisiana-Monroe. Toscano shot 73-69-71 to finish at 3-under 213. She was the only player to break par. University of South Alabama player Siti Shaari finished third at 218, while teammate Juile Hovland was fourth at 219.

It was the second win of the season for the University South Alabama but their first since last October at the Lady Red Wolves Classic.

“It was good to be in a dogfight with a bunch of other conference teams and come out on top a month before (the Sun Belt Conference Championship),” South Alabama coach Matt Luther said. “Texas State is good; ULM has been good – it’s a good spot to be in.”

A three-over-par final round helped lift the University of North Alabama to a fifth-place finish in an 18-team field at the Twin Oaks Intercollegiate.

UNA senior Clayton Larsen from Manchester, Iowa, finished fifth individually to lead UNA’s efforts with rounds of 70, 71 and 71 to finish with at 1-under-par 212.

UNA was tied for sixth after shooting an opening round 290. Despite a 294 in the second round, the Lions’ 287 in the final round was enough to put the Lions in fifth.

UNA’s Dakota Terry, playing as an individual, tied for 41st at 222.