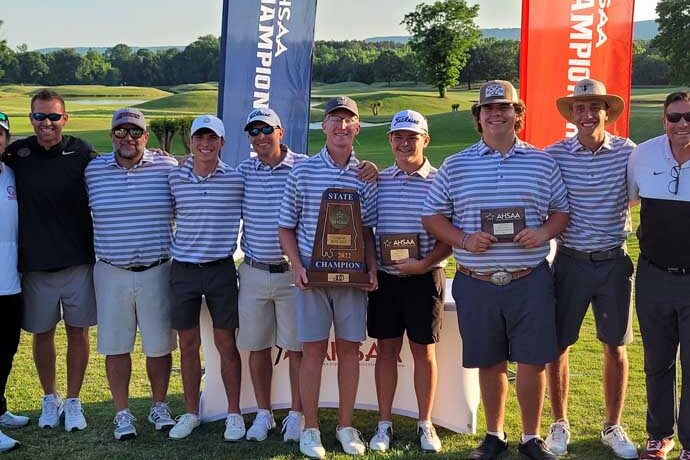 UMS-Wright claimed the 26th state title in school history by winning the Class 5A title, while Mountain Brook took home its 11th title in Class 6A.

Perhaps the biggest surprise came in Class 4A, where Haleyville’s boys team shot consecutive rounds of 297 to win the first boys title in school history.

Another highlight came when Lauderdale County’s Peyton Preston aced the par-3 No. 14 in the Class 3A competition. He finished seventh overall in the 3A boys’ competition with a two-day 167 total.

Vestavia Hills shot 2-over 290 Tuesday and also finished a 590 total to win the Class 7A boys’ titles. Haleyville’s 594 total in Class 4A was the third best team total of the 36-hole tourney.

UMS-Wright’s boys had a 611 total in Class 5A. Bayside Academy won its third state title since 2013 with a 643 total in Class 3A, and in Class 1A/2A, rivals Elba and Brantley battled to the wire before the Tigers emerged as the repeat state champion – by just one stroke. Elba had a 665 team total and Brantley shot 666.

Spain Park wins Class 7A title in tiebreaker over Huntsville

Spain Park and Huntsville tied with 452 team totals in the Class 7A girls’ state tourney. The state title was decided by tie-breaker (A) of the state tournament procedures which compares each team’s No. 4 participant’s results.

The Jaguars won the tie breaker and the state title thanks to Courtney Johnson’s 79-76 – 155 total.

The low round Tuesday was turned in by Chase Kyes of Spain Park, who had a 67 to finish second overall in Class 7A to Jack Mitchell of James Clemens, who had a 68 each round for the lowest 36-hole total of all participants with an 8-under 136.

Vestavia Hills’ Ward Harris carded a 3-under 69 to lead the Rebels to 7A state title.

Hartselle’s Jinger Heath had the low round of the tournament on the girls’ side, shooting a 6-under 66 to wind up one stroke behind Class 6A girls’ low medalist Frances Brown of UMS-Wright. Brown put together rounds of 71-69 – 140 to lead the Lady Bulldogs state-champion run. Heath shot 75 on Monday and finished with a 36-hole total 141.

Hewitt-Trussville’s Molly Davidson shot back-to-back rounds of 70 to finish 4-under 140 to capture medalist in Class 7A. Auburn’s Kate Ha also shot a 70 Tuesday to finish second at 143. Gabriella Nicastro of Huntsville was  third overall with back-to-back even-par rounds of 72 and a 144 total. Alexandria’s Lauren Sechrest had a 73 Tuesday and closed with a 149 to earn Class 4A/5A low medalist over Pike Road’s Beka Yang by one stroke.

And in Class 1A/3A, Ella Cothran of Brindlee Mountain recorded the second lowest round Tuesday with a 5-under 67 and finished with a 3-under 141 total to win the 1A/3A low medalist  by 10 strokes.

Mountain Brook’s Tom Fischer shot the low round in Class 6A with a 4-under 68 and finished deadlocked with St. Paul’s Fleming at 1-under 143 for the tourney. The two earned co-low medalist honors.

Guntersville’s John Bruce was 3-under 69 to take low medalist honors (141) for the Class 5A state champion Wildcats. Haleyville’s Hudson Lawson led a strong lineup for the Lions with a 70-72 – 142 to take medalist honors in Class 4A. Teammate Jake Temple was second with a 74 Tuesday and 146 total. Jack Lawson (150), Griffin Kimbrell (156) and Brandt White (160) each had a top 10 finish in the 4A individual rankings.

Bayside Academy’s Cole Komyati had a low round of 69 Tuesday and earned medalist honors with a 143 total in Class 3A. In Class 1A/2A, Bayshore Christian’s Michael Heaton had rounds of 68-75 – 143 to earn low medalist.

For complete statistics for all participants, visit here.