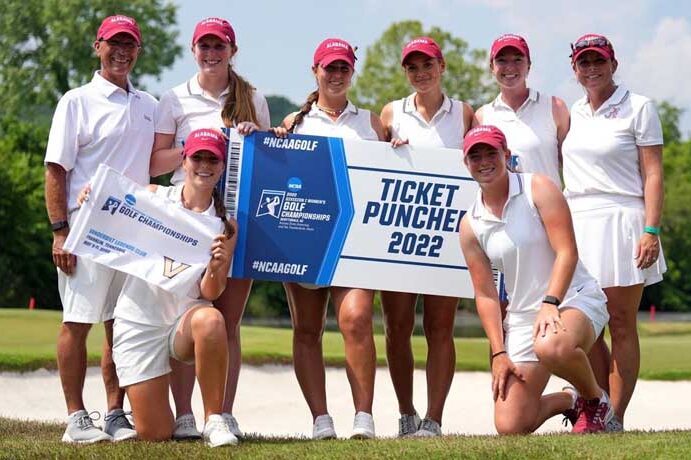 Alabama survived the Franklin Regional, while Auburn made it through the Stillwater Regional.

Also, another familiar face in Alabama golf will be competing in the national tournament. Huntsville native and former Alabama golfer Michaela Morard helped the University of Southern California, advance to the 24-team tournament.

The Crimson Tide and Tigers will compete in the national tournament set for the Grayhawk Golf Club Raptor Course in Scottsdale, Arizona, May 20-25.

Polly Mack led the Crimson Tide to a second-place finish at the Franklin Regional, firing rounds of 65-73-66 to claim medalist honors with a 54-hole total of 12-under 204. She beat Wake Forest’s Rachel Kuehn by four shots.

Also for Alabama, Benedetta Moresco finished tied for fourth at 211; Emilie Overas tied for 33rd at 222; Isabella van der Biest tied for 36th at 223; and Angela Moresco tied for 40th at 224.

Alabama coach Mic Potter said he was proud of the way the Crimson Tide played.

“They stayed in the present, they handled adversity when it came their way and the result was one of their best tournaments of the year,” he said. “It is the goal of every golf team at the beginning of the year to compete for the national championship. We now have a chance to do that.”

Auburn put together an historic third round in Stillwater to earn its qualifying berth in the national tournament. The Tigers were 11 shots out of fourth place with one round to play, but shot 12-under over the final 18, including 11-under on the back nine to slip into a tie for third place.

“An absolutely amazing day,” Auburn head coach Melissa Luellen said. “It was one of the greatest comebacks in Auburn history. They were locked in mentally.

“I’m so happy for our seniors who get another chance to win a championship. I’m going to see my hair stylist to cover the gray hairs that popped.”

With a third-round score of 276 (-12), it was the lowest NCAA Regional round in Auburn history, and it also set the Karsten Creek Golf Club course record for a single round.

Baylor won the regional with a 54-hole total of 865. Arizona State was second at 879, while Auburn and host Oklahoma State were tied for third at 881.

Two Tigers – Mychael O’Berry and Kaleigh Telfer – each tied for seventh place at 218. Anna Foster shot 67 in the final round and finished tied for 10th place at 219. Megan Schofill tied for 39th at 233.

Auburn will be playing in its fourth consecutive NCAA national championship tournament. Alabama is making its 16th championship appearance, including 15 with Potter as coach.

In the Stanford Regional, Morard, who played one year at Alabama, helped Southern Cal to the team championship. Morard shot rounds of 70-71-69 to finish sixth in the individual standings. Morard is a Randolph School graduate in Huntsville.