Willy Wilcox on the comeback trail 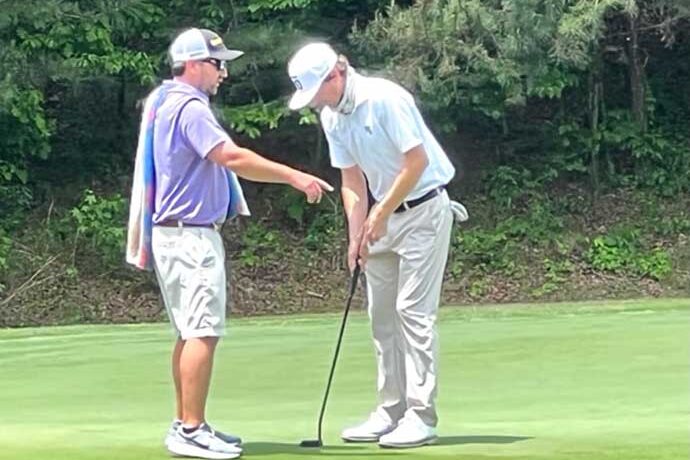 Ask Willy Wilcox how he’s doing these days and he’ll give you a frank assessment of his life to this point.

For the longest time and up to about nine months ago, his life was a mess, and he doesn’t mind owning up to it. But Willy’s World is looking a whole lot better these days through clear eyes and a sharp mind focusing on returning to the game he effectively gave up.

Willy Wilcox’s story of battling addiction, culminating with his walking away from a game he’d known all his life, and subsequent comeback, has been well chronicled in the national golf media. A book is forthcoming (and a movie, perhaps?)

The Willy Wilcox Comeback/Redemption Tour took another major step forward Thursday when the Pell City native shot 6-under-par 66 at Silver Lakes to get through local qualifying for the U.S. Open.

“My game’s back. My brain’s back. I feel good and I really got a good head start on living a nice man life.” But just because this latest step took place at a U.S. Open qualifier, don’t think this is some kind of a Tin Cup story with the U.S. Open the end of the tale.

While a spot at Brookline next month would be a nice get — Willy Wilcox has played in the Open before, in 2011, and knows how hard it is to get there — the ultimate goal, the ultimate sign that the comeback is complete, would be “to never have a real job,” which is a fun way of saying getting back on Tour.

Wilcox had a regular job back in the dark days. He was a top 80 player on the PGA Tour, one of the best ball-strikers in the world, with millions in endorsements and the Korn Ferry Tour to fall back on when his status slipped.

A ‘drug addict with a PGA Tour card’

He was a guy who had won on the Korn Ferry Tour, shot 59, played his way into the final group on a Sunday of the PGA Tour event, made a hole-in-one at the iconic 17th during The Players. For those who follow the game, it seemed he had the golf world by the tail.

On the outside he was on a roll, but on the inside he was in turmoil, fighting the demons of addiction. He was playing well when messed up but he’d always have his “birdie pills” to help get him through.

“I was a drug addict with a PGA Tour card,” he famously told a writer from Golf Digest.

His downward spiral continued until it finally bottomed out during a KFT event in Utah last August – the same place he shot the 59 – where he made the turn and kept going — straight to the airport. He flew back to Alabama and said he’d never play again.

“That was because my head wasn’t right,” he said. “It was pretty dark and sad.”
Once he returned home, he tried doing some things golf-related, helping secure venues for the junior tour the family runs, giving lessons, but the pull from inside the ropes was too great. He had to get back out there and set in motion the wheels for the comeback tour.

He never lost the look and arrived at Silver Lakes for the qualifier looking like a Tour pro. Khaki slacks, collared shirt and Sub-70 cap to match the bag Alex Harper was dutifully attending while his playing partners and many in the field played in Bermuda shorts.

And he had that smooth, fast swing that looked and carried a lot different than many of the others on the range. Those who know him best said during the round his swing and ball flight are back to where it was when he played in 2014 and 2015, when he was at his peak.

Willy Wilcox: Game is back, brain is back

Even he seems to agree:  “It doesn’t seem too far” off.  “My brain definitely works better out there,” he said.

“I don’t get as angry and my speed’s back. Swing speed is pretty key.”

Since starting his comeback he has not shot a competitive round in the 70s. It’s been 69, 67, 68, 64, 66. He won his first tournament sober when he lapped the field at an Emerald Coast Tour event in Destin, winning by seven shots and capping it off with a double eagle on the final hole.

The swing is at 117 mph, which got the ball out there a long way Ton hursday, both into and with a regular breeze.

He’s even made a tweak in his putting which gave him a chance to make everything he looked at in his qualifying round in which he had seven birdies, an eagle and three bogeys.

He turned from the Backbreaker 9 in 31 that legitimately could have been 29 had his tee ball on 8 not found a divot in the fairway. He missed one fairway and the three greens that produced his bogeys. He had 13 putts on the front nine with five one-putt greens.

The 66 he shot sat atop the leaderboard until Ford Clegg, a Mississippi State player from Mountain Brook, posted a 65 a short while later.  “I played real good. I played remarkably well,” he said. “You go out there and you’re just hoping to not do something stupid, basically. I’m just excited to have gotten it done, so, yeah, it was pretty sweet. I’m very pleased.”

Part of the credit for his return to form goes to new swing coach, Jammie Lett, the director of golf at Oxford’s Cider Ridge Golf Club. New as in like the last week to 10 days.  Wilcox and Lett had known each other from their days playing the old Hooters Tour, but it was a chance meeting over the winter and a swing tip that clicked that brought them back together for a more permanent relationship.

Lett has become a big fan. Wilcox has a lot of people pulling for him, as you could see from all the guys from Silver Lakes who followed him during the qualifying round.

“I still think he’s a top 50 player in the world, I really do; his ball-striking and everything, he’s that good,” Lett said. “It’s just a matter of getting opportunities right now, getting opportunities to get out there and play because when he does it won’t surprise me one bit if he wins.

“It’ll be an amazing story – it’s already an amazing story – and will be a world shocker, but it wouldn’t shock me that much because physically he’s there and mentally he’s doing amazing. That’s the most incredible part of the whole thing is how he’s sticking to that part of it. He’s doing really, really good. You can’t help but pull for the guy.”