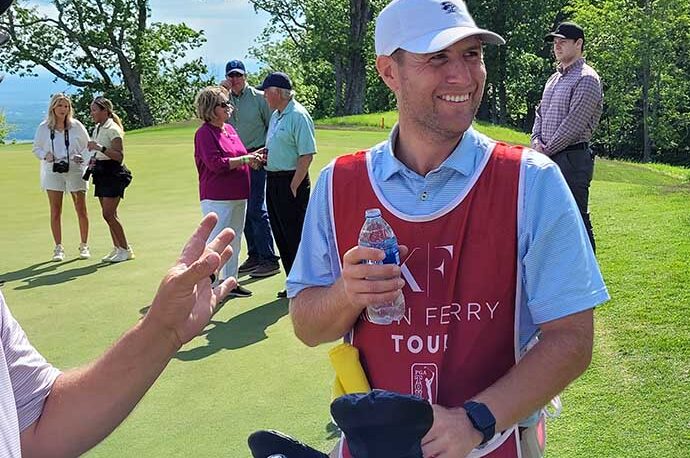 Coming off a win looping for Australian Harrison Endycott

COLLEGE GROVE, Tenn. – The second chapter of Brad Story and Harrison Endycott’s most excellent adventure is still being written at The Grove just south of Nashville.

Whether there is a third chapter next week in Knoxville remains to be seen, but Endycott has continued his strong play on the Korn Ferry Tour for a second straight week with Story on his bag.

To recap, Endycott and Story, who is the director of golf at Huntsville Country Club, hooked up for what was thought to be a one-week stint for the Huntsville Championship. Endycott took home his first Korn Ferry Tour win in a waltz at The Ledges and opted to keep Story as his caddie for the Simmons Bank Open being played just up the road from Huntsville in Tennessee.

After opening rounds of 71-67, Endycott was in 21st place heading into Saturday’s third round. Before Story got on the bag, the Australian’s best finish this season had been a T19 in the Bahamas.

Story admitted that he is using vacation days while doing the caddie thing with Endycott. He also said his wife has had no issues with his being away from home.

“She loves it,” Story said. “At dinner Sunday night when Harrison asked me to caddie again, I think she had a bigger smile on her face than I did. I think she was really excited about it.

Brad Story: a different dynamic at the Simmons Bank event

The dynamic between Endycott and Story changed a little for their second week in competition. While Story was familiar with The Ledges last week, The Grove has presented a different challenge and some unfamiliarity.

As a result, Brad Story said his role has been a little bit more of just affirming what Endycott sees on the Bermuda grass greens.

“It’s definitely much different than last week,” Story said. “He has done a little bit more on his own this week – his reads. I’m Just kind of giving him the confidence that that’s the line and getting him to hit it.”

The caddie gig came at a good time for Story. Huntsville Country Club is hosting an AJGA event this week and he said that organization basically runs everything during tournament week, so his presence wasn’t required. If he gets another week with Endycott, he’ll likely miss a members match-play event.

“But I think I have that covered,” Story said. “I’ve been in constant communication with my boss and everything seems to be going good right now.”

Story laughed when asked if he has now achieved rock star status at Huntsville Country Club.

“It’s actually kind of a joke – my divot repair tool says ‘Local Legend’ on it, so I didn’t think it could get bigger but here we are. It’s still in the honeymoon phase. Everybody is loving it. I guess it is kind of funny that people are enjoying it more than me almost.”

Joking aside, it’s been a whirlwind two weeks for Story.

“It is crazy,” he said. “Never in a million years did I think I would be doing this and I’d be here caddying for a guy who just won on the Korn Ferry Tour. It’s wild.”

Story is having fun, but don’t be fooled to think it is just a couple of guys having a good time on the golf course. For the 25-year-old Endycott, it is his livelihood as he closes in on a life-long dream of playing on the PGA Tour.

For Story, it’s a nice departure from the weekly routine as director of golf. But caddying is is hard work.

Oh, and his feet hurt from two straight weeks of lugging a heavy golf bag around.
Regardless of whether there is a third week caddying or not, Story said the experience will make him a better player and a better teacher when he does return to HCC.

“I’m learning some stuff that I can go back and talk to my membership about when I am giving lessons,” Story said. “I can tell them, ‘Hey, this is what these guys do. You don’t have to do that – the guys out there don’t do that.’

He’ll also use Endycott as an example.

“Harrison, for instance, never tries to do too much with any one shot,” he said. “He never tries to hit a big looping draw or a crazy fade. Not a hero shot, he doesn’t have to. He just plays straight forward golf – it’s simple.

“A lot of people could learn from that – not doing too much, not taking an error and compounding it. Just keeping things in front of you. It’s been valuable and the experience has been so cool.”

Regardless of whether this is Story’s last week as a caddie or if he gets another week, it’s a memory he’ll treasure and he hopes he’s made a new friend for life.

“You have to think so,” he said. “Golf does that already – you caddie for a guy who gets his first win and you hang out with him for weeks on end. You would have to think that we would never lose touch.

“I have played one round of golf with guys before and become life-long friends,” he continued. “To go through something as emotional as he did last week, you have to think that things will always be good between us.”