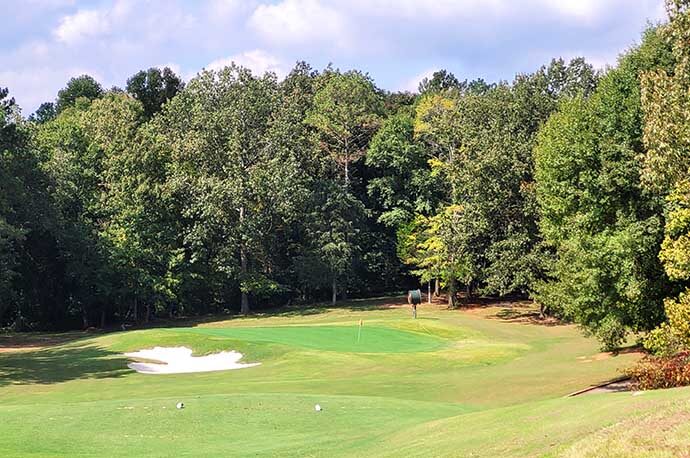 Vestavia Hills and Hoover emerged from the North sub-state tournament, while Auburn held off Enterprise to win the South sub-state.

Auburn’s Connor Jones led the way for the Tigers with a 3-under 69 at the Moore’s Mill Golf Course. As a team, the Tigers shot 4-over 292 to edge Enterprise (298) by six shots.     The Tigers posted a 4-over 292 team total to edge runner-up Enterprise, which finished six shots back at 298.

From the North, Vestavia Hills had three players in the top five and shot 287 to win by 16 shots over Hoover at Timberline Golf Course in Calera. Andrew Szymela (69) led Vestavia Hills with Parker Moelling (71) and Ward Harris (71) close behind. Spain Park’s Chase Keys grabbed medalist honors with a 68 to grab one of the two individual qualifying spots from the North. Jack Mitchell of James Clemens shot 69 to grab the second qualifying spot.

In Class 6A field for the boys state golf tournament, McGill-Toolen Catholic’s Michael Crocker shot 6-under 66 to win medalist honors at the Class 6A South sub-State. Spanish Fort and St. Paul’s Episcopal finished 1-2 in the team competition at 303 and 306, respectively. Buddy Fleming shot a 1-under 71 for the Saints, and Harper Walker had a 1-over 73 for the Toros. Wetumpka’s Troy MacLean shot 76 to earn the other South sub-state individual qualifier.

In Class 5A field for the boys state golf tournament, Guntersville’s John Bruce shot a 3-under 69 in the Class 5A North sub-State tournament at Twin Bridges Golf Course to lead the Wildcats (315) to the team title. Lawrence County was second 27 strokes back at 342. West Point’s Bailey Sutter (78) and Alexandria’s Cleat Forrest (80) qualified as individuals from the North.

Although Haleyville is roughly 80 miles northwest of Birmingham, the Lions had to travel to Dothan in southeast Alabama to claim the Class 4A boys sub-state title with a 298 total. Hudson Lawson shot 69 claimed medalist honors and paved the way for the Lions at the RTJ Golf Trail Highland Oaks. Alabama Christian was a distant second at 337. Qualifying as individuals from the South were American Christian’s Andrew Turner (76) and Geneva’s Colton Yarborough (80).

Bayside Academy won the Class 3A South sub-State crown with a team 312 score at Fairhope’s Rock Creek Golf Club. Cole Komyat was medalist for the Admirals with a 2-under 70. Individual qualifier Taylor Holton was second with a 71, and Opp, paced by London Rogers’ 3-over 75, finished second at 325. Mobile Christian’s Taylor Hollon (71) and Weaver’s Nicklaus Ledbetter (74) were South individual qualifiers.

Lauderdale County (318) and Westbrook Christian (338) finished 1-2 to earn state tourney berths in the Class 3A North competition. Dillon Bayes led the winners with a 1-over 73 to claim medalist honors. Oakman’s Daniel Martin (75) and Winfield’s Elliott Overton (77) qualified from the North as individuals.

North Sand Mountain and Athens Bible were 1-2 in the team competition at the Class 1A/2A North sub-State tourney with 335 and 342 team scores, respectively. Winston County’s Tyler Steele earned an individual qualifying spot in the state tourney with a par 72 and claimed medalist honors. Red Bay’s Buck McRight also qualified with a 75.

Elba (320) and Brantley (335) finished first and second in the South sub-state. Carson Wise led Elba with a 76, while Tucker Kilcrease led Brantley with a 78.

Individual qualifiers were Vincent’s Brandon Fincher (71) and Bayshore Christian’s Michael Heaton (73).  The state tournament is May 9-10 at the RTJ Hampton Cove in Huntsville.