TP Country Club: Trees, and lots of them 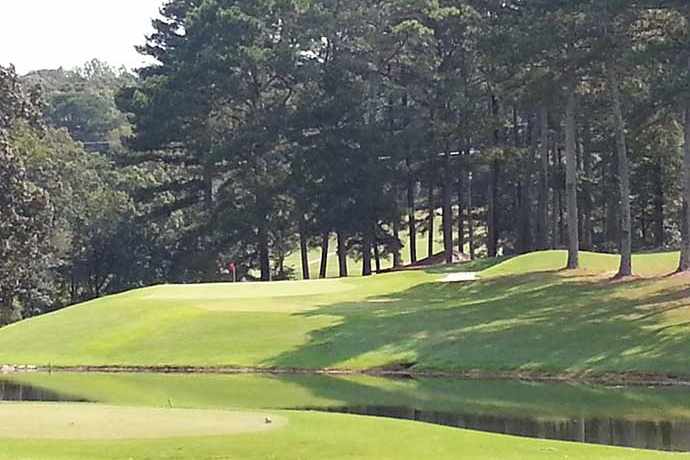 Browse the scorecard from TP Country Club and the course hardly seems intimidating.

Short by today’s course design standards, TP Country Club is anything but easy.

First off, you have to hit the ball straight. Lining its narrow fairways, towering pine trees stand ready to gobble up errant tee shots.

The Bermuda grass rough – you know the kind where the ball automatically sinks the bottom of the grass, leaving your next shot a true guessing game – will it fly or will it be a knuckle ball – is no bargain either.

That’s why TP Country Club places a premium on accuracy.

Adding to the course’s difficulty are the constant elevation changes. The second hole, for example, measures a scant 305 yards from the white tees. But the landing area for drives is where the fairway begins its steep ascent to the green. It leaves a blind second shot with only the top part of the flag visible.

How steep is the uphill climb? It’s at least a one club difference, and depending on the wind and pin location, possibly as much as two clubs.

It’s that second hole that sets the tone for the rest of the round. Up and down; down and up. Not all of the shots are as severe as the approach on No. 2, but the elevation changes make club selection difficult and uncomfortable for players unfamiliar with TP Country Club.

There are some well-placed bunkers and not much water. The bentgrass greens can be slick when Alabama’s cooler weather sets in.

Best holes: The fifth hole is a 167-yard par 3 with a long, narrow green and a severe drop-off to the left. A bunker guards the right side of the green. No. 7 is a 350-yard par 4 in which the fairway runs out at about 250 yards. The second shot must carry a large ravine to a shallow green.

This and that: The host professional at TP Country Club is Matt Livengood, who grew up in nearby Good Hope. He’s been on the job since March after working at several clubs around the country. TP Country Club is open for public play six days a week. It’s closed Mondays. Weekday fees are $59; weekend rates are $69. The course features a practice facility and fully stocked golf shop. There also is a full-service grill.