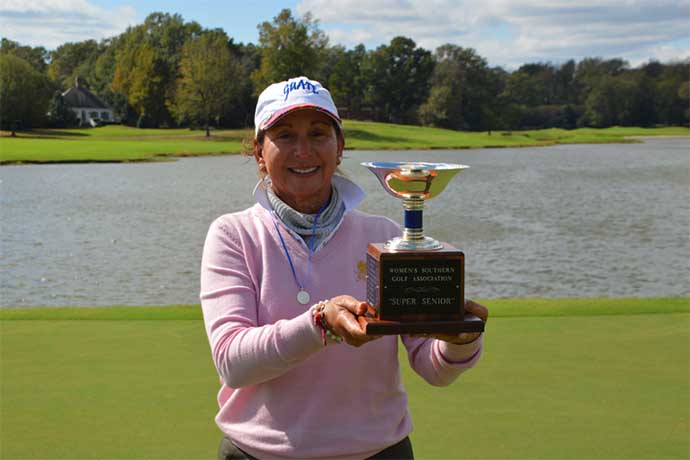 Kim Keyer-Scott of Estero, Fla., posted two consistent rounds of 3-over 75 to win the Championship Division of the Women’s Southern Senior Amateur Championship.

Keyer-Scott finished with a 6-over total of 150 in rainy conditions at Old Waverly Golf Club in West Point, Miss.

In the Tournament Division, Maria Malone of Greensboro, N.C., finished with a 27-hole score of 16-over 124 to win.

Beatriz Arenas of Wellington, Fla., carded a 14-over 86 final round, finishing with a 20-over 164 to win the Championship Division Super Senior title. Rhonda Haynes of Hot Springs Village, Ark. posted a 27-hole score of 21-over to claim the Super Senior title in the Tournament Division.

In the Tournament Division, Lori Holibaugh of Marietta, Ga., posted a 27-hole score of 18-over par 126, just two strokes behind Malone. In third place, Lisa Horsley of Jackson, Miss., finished with a 27-hole total of 19-over. Cynthia Birch of Cypress, Texas, claimed fourth place with a 27 hole 20-over-par 128.

Th highest-finishing Alabamians at Old Waverly were Theresa Mahlik of Madison, Alabama, who finished T13 in the Championship Division at 16-over, and Susan West of Tuscaloosa, who carded 80-85 for 21-over, which took sixth place in the Tournament Division.

The Women’s Southern Golf Association Amateur & Mid-Amateur will be held at the Falls Club of the Palm Beaches next June 7-10.

Old Waverly, founded in 1988 and sitting on 360 acres and in the heart of the Mississippi Black Prairie, was created as a result of the vision of the George and Marcia Bryant family, who sought to create a world-class destination for hospitality and golf. The club is on many “Best Of” lists. Old Waverly was designed by U.S. Open winner Jerry Pate and designer Bob Cupp.