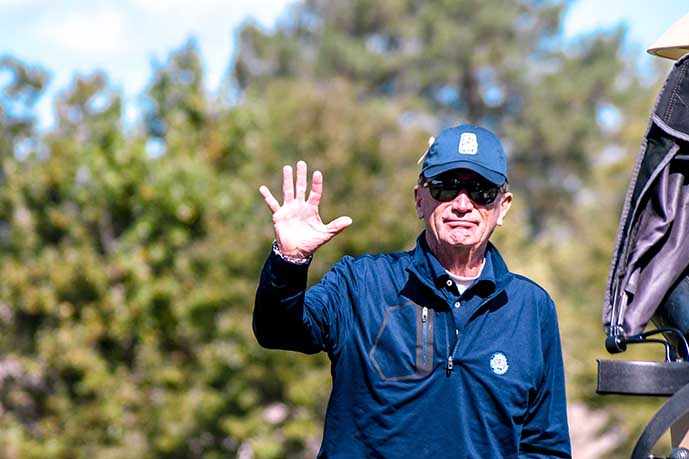 Greenville’s David Hancock proved that it’s not how you start, but instead how you finish at the 23rd Alabama State Senior Amateur Championship.

Playing at Wynlakes Golf and Country Club in Montgomery, Hancock opened the 54-hole tournament with a 74 and found himself five strokes off the lead heading into Round 2. But Hancock turned things up a notch the rest of the way, firing rounds of 69 and 68 to overtake the field and win by two shots over four players.

His winning 211 total was 5-under on the demanding Wynlakes course. Hancock had the lowest 36-hole score on the weekend to overcome his sluggish start.

“There were a lot of really good players,” Hancock told the Alabama Golf Association. “I’m fortunate to come out on top today. It’s the second win, and you never know when you’re going to get another one. So, you just enjoy every bit of it!”

John Wright of Fairhope, Alabama, playing strong golf on Saturday and Sunday, finished second, posting a 3-under 69 for the final round and 3-under 213 overall. Wright went 69-69 on the weekend after struggling to a 75 in the first round.

Wright claimed second in a scorecard playoff over Charles Noto of Birmingham, Joey Holley of Troy, and Mike Arasin of Auburn.

Noto and Arasin shared the lead after the first round at 3-under 69. But Noto shot 75 in the second round and Arasin closed with a 74 to open the door for Hancock and Wright.

Stewart “Buddy” Alexander of Auburn repeated as the Alabama State Super-Senior champion. Alexander shot 73 in the final round and finished at 5-under 211 to successfully defend his title

He carried a two-shot lead into the final round after opening with rounds of 70-68. “Winning is great and I think at our age,” Alexander said. “We’re just blessed to have the opportunity to play golf.”

Mobile’s Richard Jeffers followed Alexander, claiming second with a 3-over 75 to close. He finished four strokes behind at 215.

Robert Parmar of Fairhope was third. He closed with a 71 and finished at 220.

The Senior and Super Senior championships concluded the 2020 season for the Alabama Golf Association.