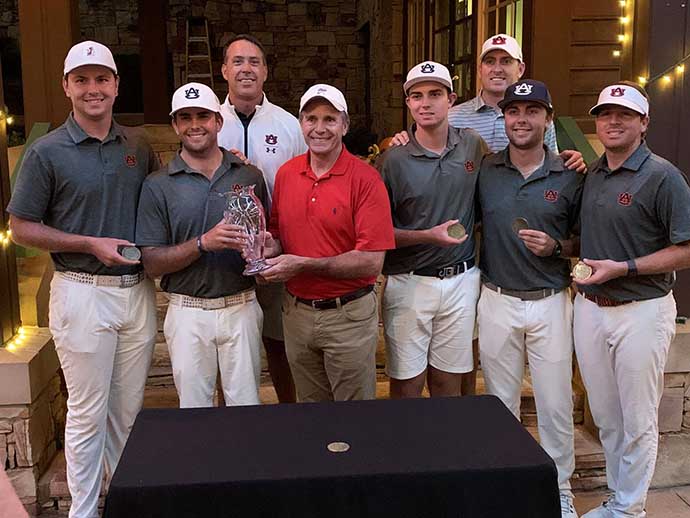 Alabama Finishes Well off the Pace

Auburn needed an extra hole, but the Tigers finally got the job done in winning the Jerry Pate National Intercollegiate Championship.

Auburn, Georgia and Vanderbilt were tied at the end of 54 holes at the par 70 Old Overton Club before the Tigers emerged with the win.

With the win, the Tigers closed out the fall having won a team title for the 12th consecutive season with coach Nick Clinard at the helm — extending the program record.

“It’s been a work in progress, but I’m just really proud of the guys to come out here and compete in the best conference in the country get a win,” Clinard told Auburntigers.com.

They were very motivated to make a statement that they are one of the best teams in the country, and they came out and did it.”

The playoff was decided on Old Overton’s tough finishing hole, a long par 4.

“Our guys were clutch,” Clinard said. “They hit some beautiful shots on the playoff hole. That’s a 500-yard par-4 and we’re back there hitting driver, 4 irons and 5 irons. “Wells [Padgett] hit a hybrid on his second shot that landed about six feet away from the pin and he got a birdie. Just a huge birdie. The guys were clutch. They just out-ball-struck Georgia and Vanderbilt at the end.”

The top three teams separated themselves from the pack in the 14-team field that featured all SEC schools. Tennessee was fourth at 829, eight shots off the pace. Alabama finished a distant 12th at 851.

Alabama’s top finishers were Wilson Furr and Thomas Ponder, who each finished tied for 19th at 219.

Ole Miss golfer Jackson Suber and Mississippi State’s Ford Clegg tied for first individually at 12-under 198. Missouri’s Rory Frannssen was a shot back at 199 to finish third.