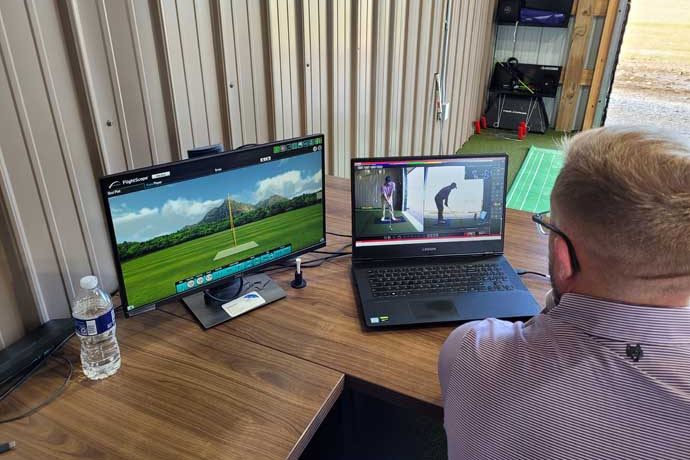 Idea for a small range grew and grew

What started out as a plan to build a four-acre golf practice facility quickly morphed into a full-scale entertainment venue along with golf instruction and TopTracer technology in the tiny north Alabama community of Greenhill.

The target date for Wohali Golf, a multi-purpose golf practice facility spread over 16 acres, to open is around May 1 dependent on the weather cooperating.

The project will feature a 29-bay hitting area overlooking a lighted 320-yard range, two teaching bays, two 4,000-square-foot synthetic practice greens, a fully-stocked pro shop/fitness area and a banquet-type space for large gatherings. There are plans for food and beverage service, although those details are still in the planning stage.

The project is a collaboration between Greenhill native Keith Thigpen and golf instructors Jason Vaughn and Daniel Creel.

Three guys sat down and an idea was born

Thigpen said he chose Wohali, which means eagle in Cherokee Indian language, as the name for the facility due in part because he has some Cherokee in his blood and it is also the name of a trucking company he started.

The idea for the project was born over a conversation between Thigpen and Vaughn, who was teaching Thigpen’s young son.

“The idea started over a cup of coffee and two guys who wanted to make a lit driving range,” said Vaughn, who played and then was the men’s golf coach at the nearby University of North Alabama. “I have always wanted to have a lit driving range. We haven’t had one for a long time in town.”

The initial plan was to use four acres of land owned by Thigpen for a limited-use range. That idea quickly became grander in scope.

“This isn’t just a regular driving range,” Thigpen said recently. “People drive to Huntsville to play at Topgolf. Everything we have here is pretty much Topgolf.”

TopTracer technology same as on TV

Although Topgolf is a major attraction for golfers and non-golfers alike, Thigpen said Wohali will offer something Topgolf doesn’t – instruction and a pro shop that will be affiliated with the Titleist Performance Institute.

“We have two great teaching pros here and we can do fittings,” Thigpen said. “We have the space to spread out to where you get the feel of a full range instead of a barriered range with netting all around it. We want to be an entertainment venue but we also want to be a venue growing young and old golfers into the game.”

As Vaughn pointed out, there hasn’t been a lighted practice facility in the Florence/Muscle Shoals area in quite some time. The three major public courses in the area – Blackberry Trail, Cypress Lakes and the RTJ Golf Trail the Shoals each have ranges but none is lighted.

Each of the hitting bays will feature TopTracer technology, widescreen television and tables and chairs.

From an entertainment aspect, users can play a number of world-famous golf courses, such as Pebble Beach, and play against golfers around the world. It can be set up for long-drive competitions and other fun games.

“It has morphed into something a little bit more than just a green-grass driving range,” Vaughn said. “It’s actually going to be a great place for people to come and practice, but also for people to come hang out in the evenings. We hope to keep kids and parents involved in golf.”

Creel, the third member of the group, is a former All-American golfer at the University of North Alabama. He dabbled on the professional side before going into private business.

Wanting to get back into golf, he built a home simulator and had an idea for opening an indoor facility in downtown Florence. Then, he started talking to Vaughn and Thigpen. Once he heard the plan, Creel went all in on the project.

He and Vaughn created V/C Golf and will form the instruction side of the venture, using FlightScope technology plus other teaching tools.

“The junior aspect is where I really want to penetrate,” Creel said. :Kids don’t realize how fun golf is and how interesting it can be. If we can have a venue where they can come and have fun, maybe they will want to take it more seriously.”

Creel said the plan is to offer a variety of plans for everyone – juniors, men and women.

“Florence has a good strong golf following and we wanted to have a facility to where we can have entertainment and better golf instruction and equipment,” Creel said. “We hope people will follow us.