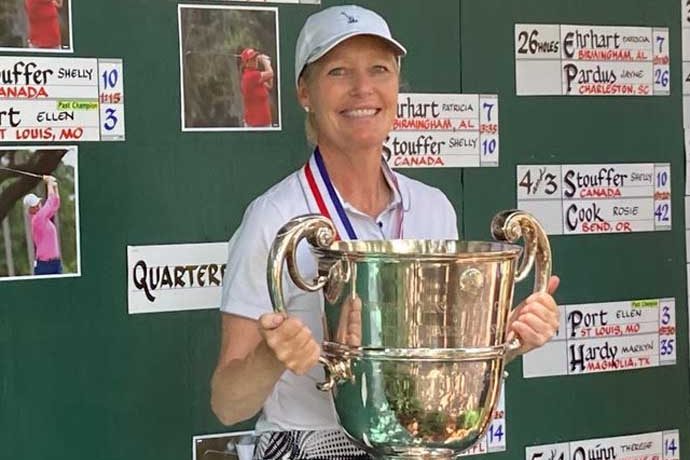 That spot in the entranceway of Lara Tennant’s home won’t require a new centerpiece; the US Senior Women’s Amateur trophy is headed back to Portland, Oregon, to the showplace it has held for the past three years.

Kathy Hartwiger of Birmingham was the top performer from the Alabama contingent that qualified for the tournament. Hartwiger, who was low medalist and shot 69 in the first round qualifying, lost 3&2 in the quarterfinals to Susan Cohn.

The 59th annual US Senior Women Amateur was scheduled to be played at Lakewood last year, but the tournament was canceled because of COVID-19 concerns. So, Tennant, who started her current streak with the 2018 championship, has had the trophy on display in her home’s entranceway since September of that year.

The way she is going, it may be in Portland for an even longer term. Next year’s championship moves to Anchorage, Alaska.

“I’m just so grateful for the opportunity to win the championship again,” Tennant said. “Even though other people talked about it (repeating as champion), I really didn’t think about it that much. Every match was tough. It was not easy to do.”

Thursday’s round began on the third hole. The championship match was scheduled to be played Wednesday, but was postponed after two holes of play because of heavy rain made the course unplayable. Competitors returned Thursday morning but not until after a one-hour delay because of a 4 a.m. rainstorm that dropped another inch of rain on the course, which over the two days received more than five inches of rain.

Tennant began play Thursday with a 1-up lead, but Port tied the match on the first hole of the day at No. 3. Tennant then won the next two holes with birdies to take a 2-up lead after five holes. Port won the seventh hole with a birdie, then added a birdie on the ninth after Tennant hit her second shot in the water. That tied the match heading to the back nine.

Tennant reclaimed the lead at No. 12 with a par and moved to a 2-up lead at No. 14 with another par. The score remained the same through the par-3 17th hole, where both made par, giving Tennant the title.

“It was wet out there, but luckily the sun came out,” Tennant said. “In terms of clubbing, probably that did not change, but I probably put the ball a little back in my stance so that I hit the ball first. You definitely did not want to take too big of a divot.”

Tennant said competing against Port is always difficult because of their close friendship, but the friendship also makes the competition enjoyable.

The USGA will ship the winner’s trophy back to an address it knows well for another year in the Tennant home entranceway.

“I love that trophy,” Tennant said. “It’s so beautiful and it’s been at my house for quite a while because of COVID and winning the two previous years, so I’ve gotten kind of attached to it. … [It’s] a beautiful reminder of how lucky I am.”