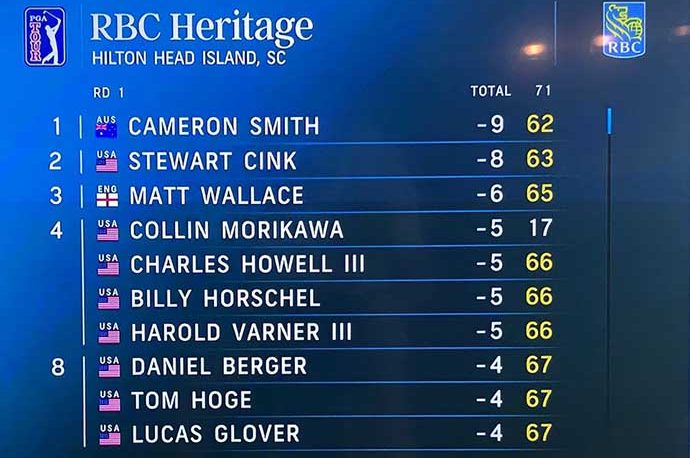 For Stewart Cink, the first shot in his first round of the RBC Heritage Thursday morning was a water ball.

Yep – it sailed 25 yards left into the lake along the 10th hole fairway. Starting on the back nine at the Harbour Town Golf Links, Cink pulled his first shot into the water. Because of where he had to drop, Stewart Cink had 213 yards to the pin for his next shot.

Coming off a tie for 12th place at last week’s Masters, the former Florence resident went on to make a bogey, but he didn’t let that opening tee shot define his round.

Instead, it turned out to be one of the few poor shots Stewart Cink hit. When he signed his card at the end of the round, Cink tallied an 8-under-par 63 and held the lead for most of the day until Cameron Smith shot 62. He had seven birdies and an eagle to offset the lone bogey. Cink’s 63 was his lowest round at Harbour Town.

Cink said his opening tee shot was “probably one of the worst opening drives I ever hit in my life.”

“It really was a very smooth round once I got past the obstacle of the first hole,” Cink said in his post-round interview. “Reagan [Cink’s son/caddie] was just joking with me that the only shot I didn’t consult with him on the whole day was the tee shot on 10, and I promptly cranked it straight into the lake. You’d think that’s a bad way to start, but in a way it’s a wake-up call.

“After playing in The Masters and being super focused and intense, to come here and be lazy on the first shot was kind of like a slap in the face and it got my attention.”

Cink, who won this tournament in 2000 and 2004 as part of his seven career PGA Tour wins, recovered with three birdies over the next eight holes to turn 2-under.

He opened his final nine with back-to-back birdies, added an eagle, and then closed the round with two more birdies.

Cink said his past success at Harbour Town provides him with a comfortable feeling when he plays the Heritage.

“It’s a little bit odd here. The ball – you don’t get the full distance. You have to make adjustments, playing for some change and your yardages, and that’s something we adjust to pretty well,” he said.

“It doesn’t take long, but you have to pay attention to it. So, I’m comfortable with that kind of stuff here, wind direction, some of the trees, the corridors where the wind funnels and sometimes blows across the top. You get used to what a southwest wind does here or a northeast wind on all these holes. That’s a part of it. That’s kind of the operation side of things. It’s just a great place to come and visit. Beautiful place. If you just take away those no-see-ums [gnats], it would be heaven.”

Cink plays at 11:23 a.m. Friday with Andrew Landry and Satoshi Kodaira. His round will start on No. 1.