Stewart Cink in Command at Midway Point of RBC Heritage 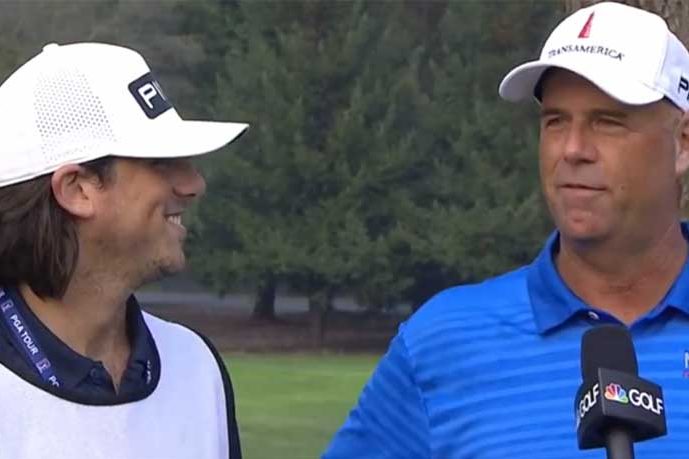 Stewart Cink hasn’t totally lapped the field through two rounds at the RBC Heritage, but he has done a pretty good disappearing act.

Friday’s second consecutive 8-under-par 63 leaves Cink, the former Florence resident, with a five-shot lead at the midway point of a tournament that he’s won twice.

Through 36 holes, Harbour Town Golf Links has been Cink’s personal playground. At 16-under 126, he not only shattered the tournament’s 36-hole scoring record by three shots, but leads Corey Conners by five shots, Emiliano Grillo by six shots and four other players by seven shots heading into Saturday’s third round.

It’s how he’s gotten to 16-under that could spell trouble for those in pursuit. For the second straight day, Cink was nearly flawless. He made six birdies and one eagle in a bogey-free round.

Cink said the key to following up his opening 63 with another 63 was “solid planning, discipline and that combined with good execution.”

“A lot of times when you have a super low round out here on the PGA Tour, it’s because a lot of crazy stuff happens,” he said. “You hole out from the fairway or maybe you hole a bunker shot or you make some long putts, but that really didn’t happen the last couple days. There hasn’t been a day of crazy makes and hole-outs.

“I’ve had a lot of really good looks at birdies, and I’ve felt very comfortable on the greens.”

Cink said par saves at Nos. 9 and 12 were crucial to keeping momentum. He credited his son/caddie Reagan Cink with providing advice on No. 12 that kept him from trying a riskier shot.

Instead of trying to play a low shot through trees near the green, Cink said Reagan talked him into playing a safer layup shot. Cink did, and he ended up with a 40-yard pitch that he got up and down for par.

“He said, ‘Dad, you don’t have to get this ball all the way to the green if you go that direction; you can easily leave it 20 or 30 yards short of the green and have a pitch right up the green.

“‘I think that’s your goal here,’” Cink recalled his son saying. “So instead of trying to hit it 160, I hit it 130, left myself 40 yards and had a straightforward shot. Now, I still had to execute the shot and make par, get up-and-down, but that was an example of how a caddie and somebody like Reagan with a comfort level to suggest that can influence a player who may be thinking other ways. So that was a good example of how Reagan really made a difference.”

Cink said he came into the second round with no specific score in mind – he just wanted to keep doing what he did in the first round. In control of his game, he made the quirky Harbour Town Golf Links look like an easy track, which it isn’t.

“We’ve got a really good plan going between Reagan and myself, and just wanted to come out here and just continue just – we call it bludgeoning,” he said. “We’re just bludgeoning that plan almost to death. When you can manage yourself around a course like that and execute, the golf course will just yield.”

Now, the goal is to stay ahead the rest of the way to earn what would be his eighth victory on Tour and second this season. His plan – keep doing what has him 16-under through two rounds.

“I don’t see any reason to change what I’m doing. I can only control what I can control, and there’s a lot of stuff that those other guys are going to do that I don’t have anything to do with, so I’m just going to try to do my best, stay committed to my thing and hopefully — I told Reagan, let’s just try to make the first two days our highest scores of the week.”