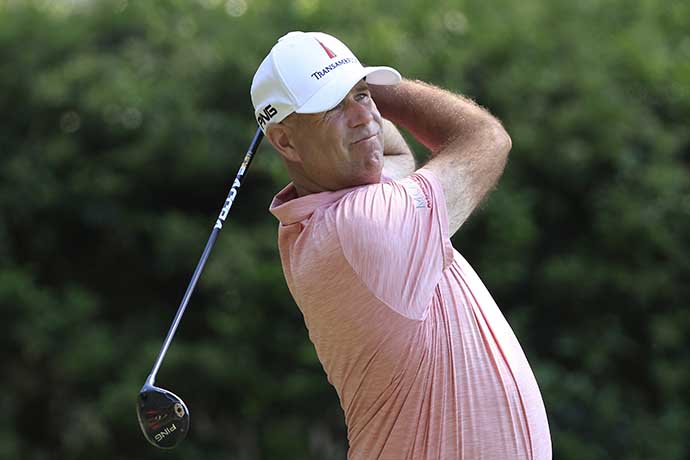 Stewart Cink, in the lead going into Day 4 of the RBC Heritage, has been on both ends of the spectrum while trying to win a golf tournament.

The best two examples of his current situation  came in 2004. At what was then called the MCI Heritage, he came from nine shots back to defeat Ted Purdy in a playoff. That day, Cink began play in 22nd place. He shot 64 and Purdy shot 73.

Later that season, the former Florence resident and Bradshaw High School graduate went into the final round of the World Golf Championship Bridgestone Championship leading by six.

His closest pursuers in that final round were Rory Sabbatini and a guy named Tiger Woods. Cink was 30 years old and held them off to win by four shots.

So, he knows anything and everything can happen in the final round as he tries to hold onto a five-shot lead at the RBC Heritage at the Harbour Town Golf Links.

Cink’s string of 63s ended at two Saturday while shooting a more humanly 2-under-par 69. His resulting 195 total after 54 holes at the Harbour Town Golf Links not only set the tournament scoring record by two shots, but turned the proceedings into basically a nine-person tournament. That’s the number of players who are within eight shots of his 18-under lead.

Collin Morikawa is the closest to Cink after shooting 67 Saturday. He is five back. Emiliano Grillo is six shots behind. Two players are at 11-under and four are at 10-under.

In Saturday’s post-round media interview, Cink recalled trying to sleep on a big lead at the WGC-Bridgestone Championship.

“That’s a fun part of playing this game,” he said. “I remember sleeping little that night.”

Seventeen years later, a wiser, more mature Cink knows anything can happen in the final round.

“I’m a little different person now, and I think I’m treating this whole tournament with a little bit more gratitude, Reagan caddying and all that stuff, and it’s been sort of a stop and sort of pinch myself along the way and enjoying it more than I’m fretting over it,” he said.

“But it’ll still be a roller coaster tomorrow emotionally, and it’s going to be a fun challenge to embrace that instead of fighting against it, creating some kind of a conflict,” he said.

Cink hopes experience will help pull him through. After all, he’s been there, done that. The key, he said is to avoid the temptation of becoming defensive and continue to play freely.

“It’s just what you have to expect and you have to prepare for it and you have to embrace that,” he said. “If you try to ignore those feelings or act like they’re not there, it’s going to consume you. I’ve been there before. I’ve certainly been nervous and thrown up on myself, and I’ve also played great in that situation.

“You know, I think it’s a lot better to embrace it and enjoy it and feel the tingle as opposed to trying to act like it’s not there.”

Stewart Cink wasn’t quite as sharp in the third round as he was in the first two – primarily because his putter wasn’t nearly as hot. He had plenty of good looks at birdie but failed to capitalize on numerous occasions. In that regard, he was fortunate that none of those closest to him when the day began made significant runs. Morikawa had four birdies on the back nine to get to 13-under, but never got closer than five shots. At one point, Cink had a seven-shot lead while playing the back nine.

Stewart Cink Breaks Down that Shot with the Twig

Cink left little doubt that he wasn’t going to fall apart with his par on the 12th hole. His drive dove left into the pine trees and the ball came to rest with a small stick on a slope sitting diagonally behind it. He couldn’t move the stick because the ball would have moved as well, so he was left with an awkward stance, a squirrelly lie and a shot that could wind up just about anywhere.

After analyzing the situation with Reagan, Cink punched his approach shot cleanly and ended up beyond the flag and on the fringe. He two-putted for par and two holes later made a birdie to get to 18-under.

Cink said he took the bad break with his lie in stride.

“I’ve had plenty of shots that missed fairways and I ended up with decent looks at the green,” he said. “Golf evens out, and that’s just one of those places where I felt like I was probably getting one paid back to me. But I was lucky that that stick was oriented where I could still get to the back of the ball. It actually surprised us how far that ball went. We were really just trying to approach the front edge and play up the hill, and it took off really good.”

Cink said he won’t let scoreboard watching dictate the way he plays – at least not early in the round.

“The game plan doesn’t change until the last three holes, until you really have to start making decisions about when to be more aggressive or less aggressive on the last few holes,” he said.

“I won’t ignore the scoreboards, but I also won’t just totally dwell on them, either. I’ll just play my golf game until when it starts to become – well, when the time is right. I just hope that I’m in position to where it matters. So, I’m giving myself a chance. I’m proud of that, and I like the way we’re working, and so would like to just continue some of that tomorrow.”