In Front of Family and Friends, Stewart Cink Wins Again 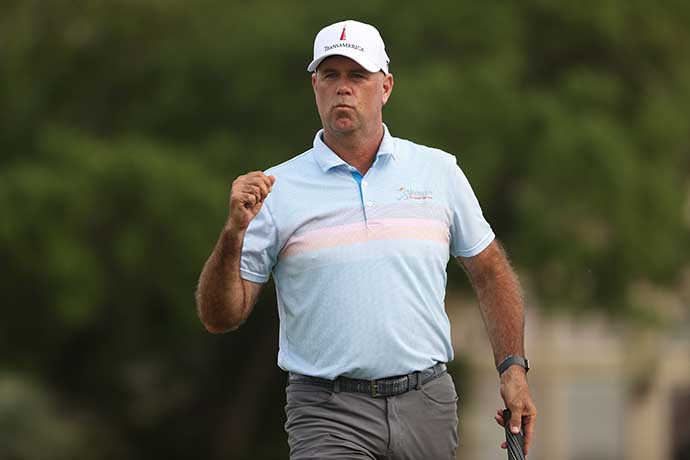 The second time around it really was a family affair.

When Stewart Cink dropped in the final putt to win the RBC Heritage Sunday afternoon for his second victory of the season, he hugged his caddie/son Reagan. Behind the ropes, wife Lisa and the couple’s oldest son, Connor, watched the scene unfold amidst a slew of friends.

Moments later, the family ccame together behind the 18th green at the Harbour Town Golf Links to celebrate. It was a touch different than last September when Cink took home the Safeway Championship to snap an 11-year winless drought. When he won that one, Connor was not in the gallery.

This time he was right there with his fiance, flying in from his home in Jackson Hole, Wyoming, for the final round.

For Lisa, this win felt right.

“Safeway was amazing, but it did feel a little incomplete without Connor with us, so to have our little family unit together was just so special, and our family unit is getting bigger, so hopefully in the future there will be more,” she said. “But what’s so amazing is this kind of rebirth that Stewart is experiencing at such an older age. I’m just in awe of how well he is playing at this time in his career, and it just seems like icing on the cake.”

Stewart Cink: Nothing Flashy Over the Weekend

Cink came into the final round of the RBC Heritage with a five-shot lead and shot 1-under 70 to settle for a four-shot win. He finished at 19-under-par 265, ahead of Emiliano Grillo and a late-charging Harold Varner III, who shared second place. at 15-under.

Collin Morikawa, who started the day five shots behind but pulled within four with a first-hole birdie, faded with a 72. He finished seventh.

While the round seemed mundane – mostly fairways, greens and two-putt pars – Cink stuck to the game plan he and Reagan mapped out the night before. He didn’t need heroics.

“I knew if I played solid today that it would be really hard to get a lot closer,” he said. “I played really solid, and it wasn’t spectacular yesterday or today, but today I was in play all day long. I did the job that I needed to do today to come away with a little bit of a cushion on the last few holes, which is such a pleasure to experience. It doesn’t happen to many people that many times in their career, but to walk down that fairway with a big lead and see that ball come up on dry land here on the 18th fringe with Reagan on the bag, and I knew Connor and Lisa were out there, it’s almost beyond words.”

That doesn’t mean he didn’t feel the pressure, though. Cink quickly dispelled that notion. He said he came into the round prepared for a dogfight.

Two Wins Vaults Cink to No. 3 in the FedEx  Standings

“I remember feeling pressure on every shot,” he said, laughing. “Come to think of it, I can’t think of one shot where I didn’t feel at least some pressure except maybe the — well, yeah, even the putt on 18. I still felt pressure. … When you have a big lead, it’s easy to fall into the trap of trying to not play bad and not lose it.”

With his third win at the RBC, Cink vaults into third place in the FedEx points standings and into the top 50 in the Official World Golf Rankings. He also is exempt from U.S. Open qualifying. He pocketed $1,278,000 for the win.

Coming off a tie for 12th at The Masters, Cink said he thought he had a good chance to win at Harbour Town. Turns out, he was right. His weekend rounds were hardly flashy – 69-70 – but his back-to-back 63s in the first two rounds gave him the cushion he needed.

“I had a really good, solid week in Augusta except I played more like I did on the weekend here all four days there,” he said. “The only difference was that I just sprinkled in some really great golf on Thursday and Friday here, and I distanced myself out from everybody. I really felt like I had the kind of stuff this week that was going to be very, very hard to beat if I just maintained my composure, and I knew that with Reagan caddying and with our belief in our game plan and the way we’re going about things, businesslike and very monotonous on the course, that it was just going to be really hard to beat Stewart Cink at this course this weekend. It’s cool when something like that comes over you, when a feeling like that happens, and then the end result is you’re right.”

He certainly impressed his fellow competitors.

“He’s old and he’s kicking everyone’s ass,” Varner said. “It inspires me to know that I can play golf for a long time. He’s been playing well all year, though, so it’s not like I’m surprised, but this week he’s played unbelievable.”