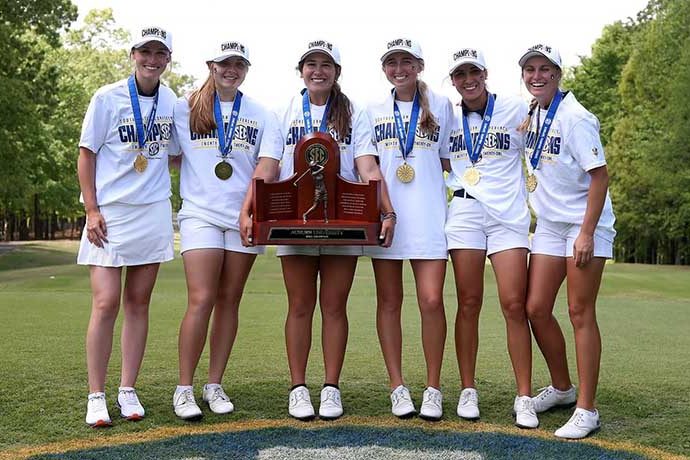 The Auburn Tigers are the Champion of SEC Women’s Golf.

Taking on Mississippi State in the championship of the match play portion of the tournament, the Auburn Tigers omen used strong back-nine play Sunday morning to take down the Bulldogs 5-0 and win the SEC Championship.

Playing at Greystone Golf and Country Club, the 5-0 final was not indicative of how close the championship match was. The Auburn Tigers trailed in three matches on the back nine before hitting some clutch shots and making some crucial putts.

Auburn won three matches 1-up. Another match finished 2&1 and the fifth match was won 3&2.

It was the 10th SEC championship but first since 2012 for the Auburn Tigers, who denied the Mississippi State squad their first championship.

“I’m so incredibly proud of the entire group,” coach Melissa Luellen told auburntigers.com. “Our whole team, all 10 of them, were out here to support. This year has truly been a group effort, and they just had so much poise and maturity to be able to flip all those matches around. I’m just excited.”

“It feels unbelievable,” senior Kaleigh Telfer said. “This has been a goal of all of us here, and finally all the work has paid off. We’re SEC champions.”

Elena Hualde Zuniga, the only fifth-senior year on the team, made birdie on the 16th hole to win her match 3&2 and clinch the championship.

Earlier, Telfer and Megan Schofill posted 1-up victories to bring the Auburn Tigers to the brink of victory.

“I was walking down 16, and I told (assistant coach) Joan (Alexander) I want to know what’s going on to see how I have to act,” Zuniga said. “I knew Megan had won, Kaleigh had won and if I won the hole, it was over.”

Brooke Sansom went on to win her match 1-up and Mychael O’Berry took a 2&1 decision in her match.

“We’ve been working hard at it,” Telfer said. “We’ve started to believe in ourselves, and I think that’s the key. We just needed to believe. We knew we were putting in all the hard work. We just came together as a team today, and we did it.”

Auburn finished third in the stroke-play portion of the tournament behind LSU and South Carolina. Advancing to match play, the Tigers took down Vanderbilt in the quarterfinals and rival Alabama in the semifinals.

Mississippi State finished sixth in stroke play and then eliminated Ole Miss and LSU in the first two match-play matches.

Alabama finished seventh in the stroke play and upset South Carolina in match play before running into the Auburn Tigers.