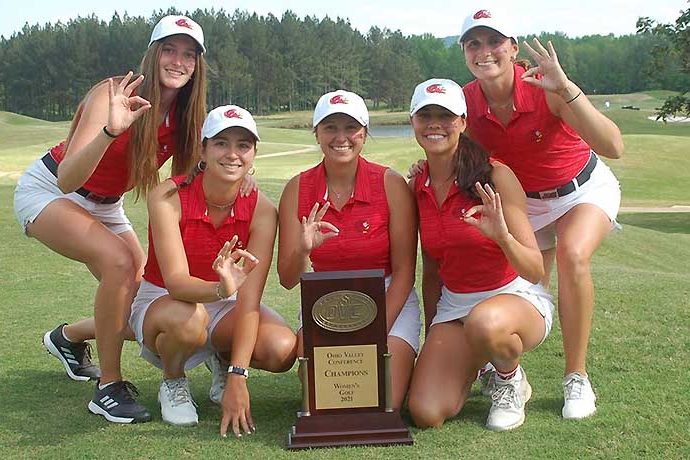 The Gamecocks shot the best 54-hole score in OVC tournament history and rolled to their sixth OVC title and first since 2012 in impressive fashion.

They beat Eastern Kentucky by 24 shots, the fourth-largest margin in tournament history. The team will advance to the NCAA Regionals with the league’s automatic bid.

Sanchez’s final-round 66 tied for the lowest single round in OVC Championship history and made her the fifth JSU medalist in its 18-year run in the OVC. She was also voted the league’s Freshman and Golfer of the Year by its head coaches, making her the third OVC player to win both awards in the same season.

The Gamecocks placed all five players in the Top 10 of the 40-player field, with sophomore Claire Vermette joining Sanchez and Altuna on the All-Tournament Team. Head coach James Hobbs was voted OVC Coach of the Year for a fourth time.

Sanchez earned her first career win with perhaps the most clutch round in OVC Tournament history.

The Barcelona, Spain, native shot an opening round 72 on Sunday and a 71 on Monday to set up her career low round on Tuesday. She birdied five holes on the front nine to make the turn at 5-under and got to 7-under before a bogey on No. 16. Back-to-back pars on 17 and 18 closed out her historic round.

Teammate Altuna finished her best 54-hole score with a final-round 72, capping a 4-under 212 that was four shots better than the next golfer in the field. Vermette finished in a tie for fifth with a 2-over 218. Valentina Curet finished ninth at 225. Layne Dyar was 10th at 226

Alabama State won their third consecutive, and their seventh in the last nine years.

Jade Sanders and Kei Harris paced Alabama State in the tournament with each finishing tied atop the leaderboard with identical scores of 6-over (150). Sanders shot rounds of 77-73, while Harris shot 76-74. Sanders captured the individual tournament title in a playoff. Both earned first team all-conference honors.

They were joined on the by teammate Alma Garcia, who finished fifth overall with rounds of 81-81 (162). Tia Kimbrough was a second-team honoree after finishing eighth overall with a 24-over (168).

Alabama State pulled away with a final round 311 to finish atop the leaderboard with a 52-over (628) to win the title and hand head coach Quincy Heard his first tournament title and SWAC Coach of the Year award.

UNA was sixth entering the final round and posted a 312 to finish at 943 in the 54-hole tournament.

Kennesaw State had the top three finishers, led by medalist Tai Anudit who shot rounds of 68-68-69 to finish 11-under 205.

The University of North Alabama men moved up one spot in the final round to finish fifth at the 2021 ASUN Conference Men’s Golf Championship at the University of Georgia Golf Course.

UNA was sixth after each of the first two rounds, but the Lions shot 292 in the final round Tuesday to finish at 877 and push past Kennesaw State into the fifth spot.

PrevPrevious ArticleAuburn Tigers Women Capture SEC Championship
Next ArticleSet Up for Failure? At Mid-major Level, Not All Courses are Created EqualNext