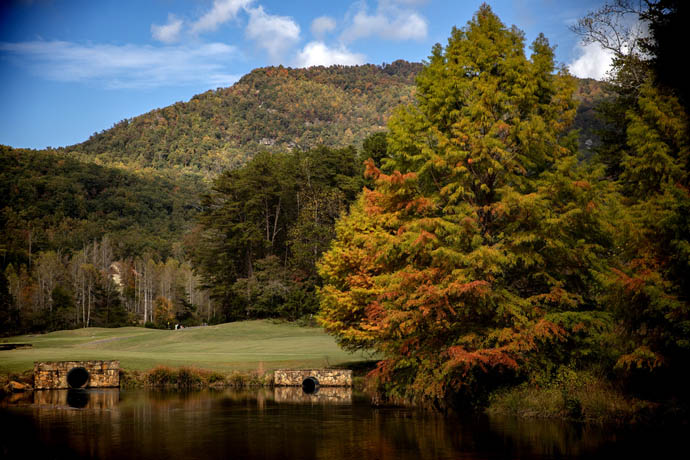 Looking for a late summer, early fall golf getaway? Look no farther than the Blue Ridge Mountains of western North Carolina and the Rumbling Bald Resort on Lake Lure.

A drive of less than six hours from Birmingham puts you on the first tee of either of the resort’s two 18-hole championship courses, Bald Mountain or Apple Valley. Both courses saw significant renovations in late 2020 and 2021 and are in peak condition in 2022.

Lake Lure is a man-made lake created in 1927 when a developer dammed the Rocky Broad River, filling the Hickory Nut Gorge about 20 miles southeast of Asheville, North Carolina. The lake is about three miles long, with a private beach for guests of the Rumbling Bald resort on its north shore.

The main attraction for late summer and early fall guests, though, is the cool mountain air of the Blue Ridge Mountains, a welcome change from Alabama’s late summer heat.

Uniquely, the Bald Mountain course features five par 3s and five par 5s. It twice was rated by Golf Advisor as one of the top 20 courses in North Carolina.

The Apple Valley course, designed by Dan Maples, opened in 1986. Although more wide open, it is a stiffer test for the bogey player, with a par of 72, course rating of 69.4 and slope of 134  from the white tees, from which it plays 6,100 yards.

Both courses meander through woods, traversing hilly terrain that varies from 900 to 1,200 feet above sea level. Overall, Apple Valley is the flatter of the two courses.

Unlike many mountain courses, neither Bald Mountain nor Apply Valley suffers from what might be called the “rustic challenge” a trade-off by which a course’s steep terrain forces a player to accept sacrifices in conditioning, playability or both. Whether uphill or downhill, conditions of both courses this season are immaculate and new Champion Bermuda greens at Apple Valley roll true.

The Rumbling Bald Resort offers lodging choices that range from studio cabins and villas to single-family vacation homes, all with fully equipped kitchens. Groups driving in from Alabama are best advised to stock up on groceries ahead of time as the Apple Valley Market, the closest store, has limited food offerings. The nearest grocery store is in the town of Lake Lure, about a 20-minute drive.

Dining choices at the Rumbling Bald Resort include the Legends on the Lake restaurant for casual dining, The Gardens, a more upscale restaurant, and the Bears Den, a grab-and-go snack bar next to the Bald Mountain pro shop.

For groups of 12 or more, Rumbling Bald offers gratis golf for group leaders upon booking their first trip to the property. The “12+ Comp” is ideal for PGA professional-member trips, tournaments, or large golf buddy trips.

A note on the resort’s name: The mountain with a huge granite face overlooking Hickory Nut Gorge and dominating the landscape is said to have experienced ominous rumblings back in the 1870s. Scientists believe the tremors might have been caused by landslides inside the many caves beneath the mountain. With the exception of a few occasional rumbles, the mountain has remained silent.

Have a story idea or a news item to report of Alabama Golf News? Email bamagolfnews@gmail.com

PrevPrevious ArticleMahlik, Erhart ready to tee it up in US Senior Women’s Open
Next ArticleGreens projects near completion on 4 North Alabama coursesNext