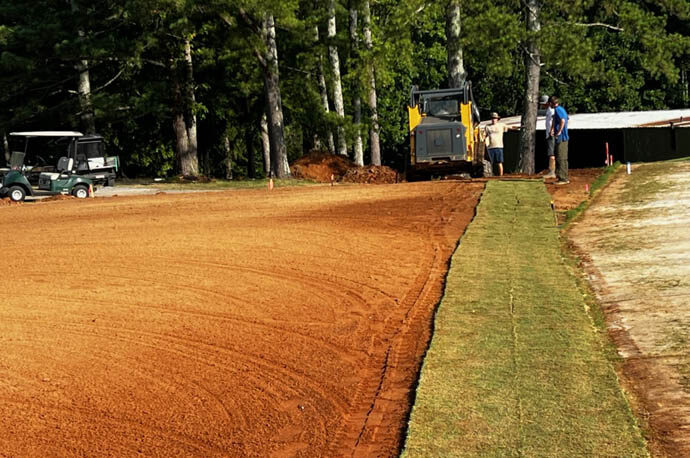 The summer of 2022 brought a variety of course improvement projects to numerous golf courses across north Alabama, and as fall approaches course operators are about to unveil the finished products.

Limestone Springs has reopened its entire 18 holes to its membership only. Cherokee Ridge is reopening Friday and Goose Pond is expected to reopen for public play near the end of September.

Corey Etter, who operates Cider Ridge, said the new greens, which were sprigged in early June, are in excellent shape as the course reopens with one temporary green still in play.

“It’s been a great summer,” he said. “We have a great property and with the new greens it is going to be great for the citizens in our area, around the state and the Southeast.”

Cider Ridge previously had bentgrass greens, which are always difficult to maintain during Alabama’s torrid summertime heat and humidity of North Alabama. Etter said making the switch to TifEagle Bermuda was a logical step.

During the changeover, Cider Ridge’s greens were restored to their original size.

“They had shrunk drastically after Bermuda grass had encroached the bentgrass greens,” Etter said. “This gave us an opportunity to restore them to their original size.”

While the new greens were in their growth stage, Etter’s staff had the opportunity to complete a variety of other projects in an effort to make the course more scenic and playable.

“We limbed up a ton of trees and removed some dead trees,” he said. “We grinded up about 150 stumps throughout the course and we have a truckload of sod coming to pack some of the thinner areas that needed it. The course looks a lot cleaner now than it was.”

For more information, go to ciderridgegolf.com

Previously one of the top courses in Alabama, Limestone Springs has undergone an extensive renovation from tee to green under the direction of Mark Langner after the course was purchased by local resident Russell Boren.

Several thousand trees were removed while the bentgrass greens and bunkers were being renovated.

The front nine holes reopened for member play several weeks ago with the back nine set to reopen this week. Depending on conditions, the course could open for public play later this month or in early October, although there is no set timetable.

During the renovation process Langner, who was the original superintendent when the course opened in 1999, said it would reopen “when it is ready.”

“It looks great and we want to get it open, but we also want to make sure it continues to look great,” member and club spokesman Steve Patrick said.

For more information, go to limestonesprings.com.

Lyle Sosebee, Goose Pond’s general manager, said the Lake course is on track to reopen in late September after shutting down right after Memorial Day for a greens renovation project and an practice area enhancement.

“It’s been going really well,” Sosebee said. “We planted the greens July 27 and we have about 100 percent grow-in on the sprigs. The grow-in has been good and we started mowing them about two weeks ago.”

Sosebee said he compared a runner of the previous Bermuda grass to the new Miniverde Bermuda and was amazed at how much thicker the new grass was.

“I see the greens every day and you can tell a difference each day from the morning until the afternoon,” he said.

While the new greens have been in the grow-in phase, Sosebee’s maintenance crew has been busy enlarging the practice area and also completing some cart path renovations.

“The driving range has gone really well and is complete,” he said. “It looks great.”

Sosebee said drainage has been added in some areas of the practice area.

For the past four weeks, repairs have been made to the cart paths.

“My crew has poured 64 yards of concrete and a contractor poured another 88 yards just making repairs around the driving range and adding things we had always wanted to but couldn’t because it was so busy.”
While the Lake course has been closed, golf traffic shifted to Goose Pond’s Plantation course. Sosebee said there hasn’t a noticeable decline in rounds played.

“We’ve been very fortunate,” he said.

For more information, go to goosepond.org.

The greens renovation project at Cherokee Ridge is complete and the course, which had been using temporary greens, will transition to its normal greens on Sept. 9.

The project of replacing its bentgrass greens with TifEagle began in late July. After killing off the bentgrass, the greens were sprigged with TifEagle and the grow-in process began. Cherokee Ridge co-owner Jimmy Green said the process would take between six and seven weeks.

The weather cooperated and the project was completed in that timeframe.

For more information, go to cherokeeridgecc