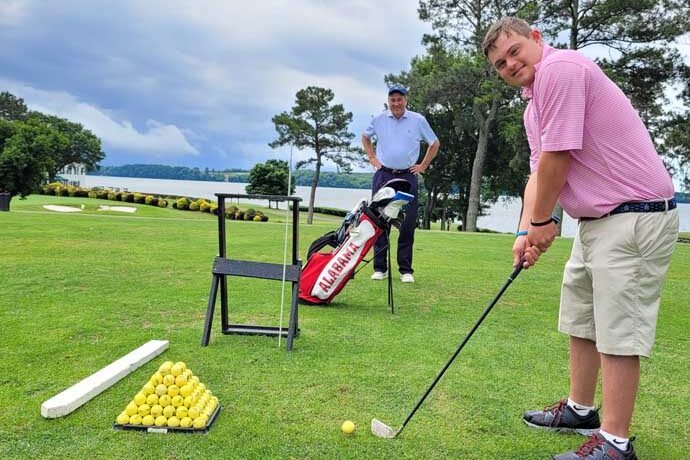 Son of Turtle Point pro practices harder than just about anyone

KILLEN – Pryce Holcombe has a smile that is infectious.

His confidence is unwavering.

His joy for playing golf is unsurpassed.

How many other players do you know who can stand on a practice range for hours on end and hit balls without taking a break. And have fun the whole time doing it?

Pryce, who has Down syndrome, spends a lot of his time at the club in the northwest corner of Alabama. Not only is Les the head pro, but his mom Pam works there too.

Recently, Pryce has been practicing even more than usual – which is to say a lot. It’s practice with a purpose as well, because he and Les will be traveling to Orlando next week to play in the golf portion of the Special Olympics USA Games. The games are held every four years and bring together some 5,500 athletes from all 50 states and the Caribbean.

Pryce Holcombe is one of seven golfers from Alabama to be included in the golf portion of the games. He’ll march in the opening and closing ceremonies along with the Alabama contingent of athletes. ESPN will televise the opening ceremonies Sunday morning.

It’s not Pryce’s first time being on a national stage. In 2019, Pryce and Les teamed together to win the alternate shot portion of the Special Olympics North American Golf Championship in Nashville. The national games dwarf that event, though, featuring numerous events in addition to golf.

Pryce and Les will compete in a 72-hole tournament in a traditional alternate shot format at Orlando’s Orange County National. They’ll play the Crooked Cat course.

He should be with all that practice.

“There probably isn’t anybody anywhere that practices as much as Pryce,” his mom, Pam, said. “He can stay up there for five or six hours. We have to call him and tell him it’s time to go home. We have to go get him.”

“We’ve threatened that you are going to walk home if you don’t come on,” Les said, laughing. “And we live in north Florence.”

Pryce doesn’t hesitate when asked what he thinks is the best part of his golf game.
“Driving. Putting. Chipping,” he said.

Les, who played collegiately at the University of Montevallo just south of Birmingham and remains an excellent player, said the pressure for him to perform is the most he’s felt in any competition.

Pryce Holcombe is confident he and his dad will beat the 82-90-82 scores they posted in Nashville in winning the Special Olympics North American Golf Championship. The course will not be as difficult as the one they played in Nashville and Les has played Crooked Cat several times in the past, so he has some course knowledge.

He’s also confident of a victory, but pointed out that the goal is to “have fun and be happy.” And he loves “playing with my dad for four days.”

Pryce received his invitation to participate in the games last August. He and Les will travel on a charter bus from Hoover to the games on June 4. The golf tournament begins June 6.

Les and Pam said the Turtle Point membership has embraced Pryce. After he and Less won the national tournament in Nashville, Pryce enjoyed celebrity status at the club, even signing some autographs for the members.

“He’s played with just about everyone out here and they all come in and say what a great experience it is,” Les said. “It has been a great place for him.”

Pryce is also quick to dispense with advice on the tee line at the driving range.

“You gotta watch out for that,” Les said. “He’ll tell them what they need to do.”

One person he likes to give advice to is Payton, his younger brother who recently graduated from the University of Alabama and will begin an internship with the Philadelphia Eagles in their communications department in July.

Seeing their son thrive is a source of continued pride for the Holcombe family.

“People told us there would be a lot of restrictions on him, but he has shown a lot of people that he can beat them at golf. He’s very athletic and he’s strong.” Les said.

What’s most impressive about Pryce and the other Special Olympians, though, is their positive attitudes.

“They are always encouraging each other,” Pam said. “Pryce will have no idea if they are winning or if they are in last place. It doesn’t matter. It’s about the competition and the fun.”

Featured image: Pryce Holcombe will compete in the national U.S. Special Olympics next week in Orlando. Pryce’s father, Les, is the head professional at Turtle Point Yacht and Country Club in Killen and will be Pryce’s partner.