Gift of Golf: Down Syndrome Doesn’t Slow Pryce Holcombe Down 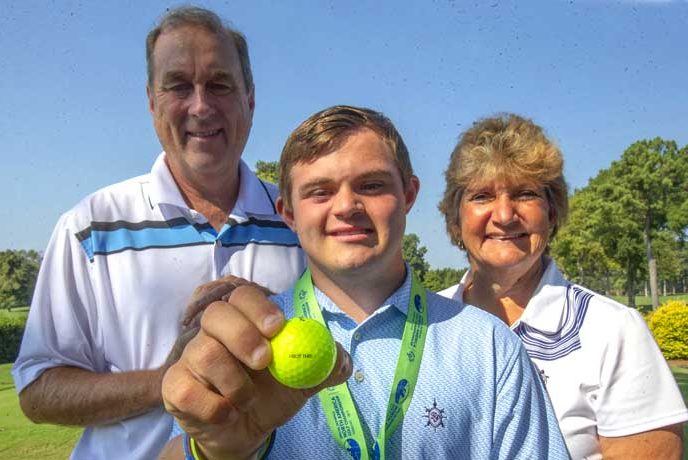 A week after teaming with his father to win a national Special Olympics golf tournament, the smile, one of those that goes ear-to-ear and you can’t help but smile yourself, had yet to leave Pryce Holcombe’s face.

On a steamy Thursday morning after the tournament, Pryce was hanging out in front of the Turtle Point Yacht and Country Club pro shop with his dad Les, the club’s head professional, and his mom Pam, who also works at the club.

Two members drove up in their golf cart, about to head to the back nine. One called Pryce “the champion golfer of the year,” in reference to what used to be called the British Open and now simply is referred to as The Open.

The other member asked Pryce for an autograph. His smile, although seemingly impossible, broadened as he happily obliged.

Les and Pam soaked it all in, grinning along with Pryce, who hasn’t let Down syndrome slow him down even though one of his doctors told Pam it would never be like this.

“The doctor came in and said we think he has Down syndrome and he’ll never run or jump but he will be OK,” Pam said. “That was the last time I saw that doctor. I said we are finding a different doctor. Don’t tell me when he is 24 hours old what he is or is not going to do.”

Turns out, the doctor was wrong. Not only has Pryce run and jumped throughout his childhood, but he’s become a pretty good golfer, as well. That, of course, is not surprising given that Les and Pam have been in the golf industry since before he was born.

The crowning achievement so far in Pryce’s golf career came two weeks ago when he teamed with Les to win the Unified Division of the Special Olympics North American Golf Championship by six strokes in the 36-team, 54-hole tournament.

The format was alternate-shot, perhaps the most difficult type of event to play in as partners take turns hitting. But Les and Pryce teamed to shoot scores of 82-90-82.

Pryce and Les qualified for the tournament that was played at The Hermitage in Nashville, by winning the state qualifier in Troy.

Now 22, Pryce is not lacking in confidence when it comes to his golf game. When asked if thought they could win, Pryce didn’t hesitate.

When asked if he could win more tournaments, Pryce gave the same answer.

Development a Source of Pride

Seeing the growth and development of their son is an obvious source of pride for the Holcombes, who have two other sons – one older and one younger, neither of which have Down syndrome.

Pam said golf has been a part of Pryce’s life almost since the day he was born. In fact, he still uses a putter he got when he was born. It’s been re-shafted several times as Pryce grew, but it remains in his golf bag.

His dedication to the game is unmatched. In the weeks leading up to the national tournament, Pryce was a constant figure on the club’s practice range.

“He would be out there for three or four hours in 100-degree heat hitting balls,” Les said. “We had to go out and get him and tell him to take a break.”

“I practiced a lot,” he said. “Every day. I love golf and hitting the ball.”

During his career in golf, Les has played in countless tournaments. Playing alongside Pryce was the highlight, though.

“This is the most important thing I ever played in,” Les said. “It really is. I don’t think I have ever been that nervous. I’ve played in a lot tournaments and they don’t bother me anymore, but I wanted to hit it in the fairway and on the green, and keep him out of the bunkers. Those were potential disasters.”

Pam marvels at how well Pryce has been able to navigate his way through the world. He has a part-time job at a local grocery store that he loves, and the interaction with club members is invaluable.

“It was a total shock,” she said. “We had no clue we were going to have a child with Down syndrome. That first year, at least, you are just numb. You are just getting by. But we were very blessed because Pryce is very high-functioning.”

Twenty months after Pryce was born, the Holcombes had Payton, who is now attending the University of Alabama.

“Because Pryce was behind in his ability it was almost like they were twins,” Pam said. “They walked at the same time; all that stuff. Payton pretty much dragged him around – it was “Pryce, come on, you’re playing basketball. You are going to be on my baseball team, I think that really helped him – he was a part of the neighborhood, whatever they were doing, he was there.”

Pam and Les made sure Pryce was always involved.

“If we went, he went,” she said. “He started showing interest right away. This is our life, so we started dragging them to the course.”

By nature, people with Down syndrome have naturally sweet dispositions, Les said. Being around the golf course has enhanced his social skills.

“It’s helped him tremendously with his social skills,” Les said. “Everybody out here is so nice to him. They speak to him and ask him how he is doing. He’ll walk up and down the driving range and try to give people tips. It’s been good for him to get out and speak to people and shake their hand. Plus, it’s exercise. He has diabetes.”

Winning the national tournament was just a small part of Pryce’s journey to Nashville. While there, he met a new friend – Amy Bockerstette, another Down syndrome child who earned national acclaim at the Phoenix Open for her friendship with PGA Tour professional Gary Woodland.

In Nashville, at registration Bockerstette was standing in line ahead of Pryce, who got her attention

“She hugged him like he was one his best friends in the world,” Pam said. “Pryce gave her one of his golf balls that says “I got this.’ The next day Amy reciprocated and gave Pryce one of her balls. One of the greatest things up there was just the joy at that event. Everywhere you went when you asked an athlete how they did, the answer was always great. They are always focused on happy and joyful.”

Les said the membership at Turtle Point has accepted Pryce as one of their own. “They have been wonderful – they play golf with him, they ask how he is doing,” Les said. “They’ll play putting games with him.”

The club even held a small reception for their national champion.

When Pam sees her son with Down syndrome accomplish something new, she can’t help but think back to the words of that doctor who told her what Pryce wouldn’t be able to do.

“All these days when he does something great, I think about that,” she said. “He can run – he might not be the fastest runner, but you know what? He can golf, and that takes hand-eye coordination. There’s a lot of people who can’t golf. It’s a difficult thing. He doesn’t hit every shot good, but he can hit a driver 225 yards or more, 250 sometimes. He’ll hit a shot and sometimes we’ll just look at each other like, ‘Can you believe that? The ability of that is incredible.’”