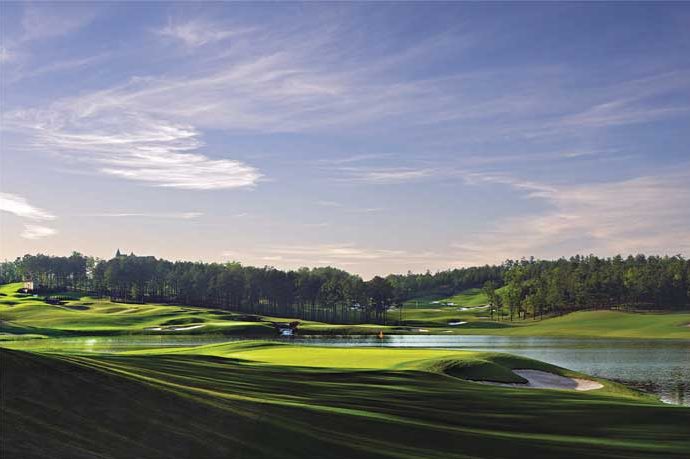 He arrived during the construction phase of the Robert Trent Jones Golf Trail project prior to its August 2005 opening, and he’s seen the resort turn into a world-renowned facility and become the flagship of the RJT Golf Trail’s resort division.

He’s also seen an entire community spring up around the facility, similar to several other RTJ Golf Trail sites.

Now, Purser has something else to brag about to his golf industry peers. The longtime director of golf at Rennaissance Ross Bridge now heads up a Trail site that has been named one of the Top 100 Resorts according to Golf magazine.

The list was published in the October issue, and it puts Ross Bridge in some high cotton when considering some of the other name-brand resorts on the list. The list was compiled from more than 3,700 review from golfers who reviewed 250 resorts across North America.

Ross Bridge was included on the list of the top 25 Buddy Trips in North America.

“When we first opened up the only thing here was the resort hotel and the golf course covered by a bunch of trees,” Purser recalled. “Now, we’ve got over 1,300 homes around us and some shopping going in. All sorts of things. We built our own parkway to make it easier to get here. We’ve become a whole community and not just a golf course.”

Ross Bridge was the last of the RTJ Golf Trail courses to open, and like the others was built on a grand scale. It’s got gaping bunkers, spacious fairways and huge greens complexes. Stretched to the max, Ross Bridge tips out at a whopping 8,191 yards from the black tees – one of two Trail courses to break the 8,000-yard barrier.

Of course, that doesn’t mean you have to play from the tips. With six sets of tees, including the front markers that measure 5,300 yards, players can find a comfortable yardage to suit their game.

Purser said the theme in plotting Ross Bridge was “go big or go big.”
Purser said Bobby Vaughan, who collaborated with Roger Rulewich on the design, said you have to understand scope and scale.

“He said you can’t have one thing big and everything else small,” Purser said.

And that’s exactly how things turned out on a wonderful piece of property that features gentle slopes and surprising elevation changes just south of downtown Birmingham. An example of Ross Bridge’s largesse can be found in approach shot yardages into the course’s immaculately manicured bentgrass greens.

“It can be 132 (yards) to the front of the green and 168 to the back,” Purser said. “The fairways are wide and receptive. It puts the onus on the approach shot into the greens.”

A word of caution from the guy who plays the course regularly – don’t go flag hunting when the pins are set close to the edges of the greens. It’s a recipe for disaster even if Purser calls Ross Bridge “a forgiving golf course.”

“If you play to center of the green, you’ll be OK,” Purser said, speaking from experience. “We’ve got false edges you can’t see, and that can turn a reasonably good golf shot into a bogey. Err to the middle of the greens and you can help your score a lot.”

Purser offers another piece of advice to visitors – don’t try to play speed golf. Stop and smell the roses, so to speak

“Take a moment to enjoy the views that you are going to get out here. It is a gorgeous place,” he said. “Not a place to just come out and try to whip around and then get in 18 more someplace else. This is a resort destination and it is built along those lines. With the views and all, you’d pay a whole lot more to play something like this elsewhere.”

That’s the truth, too. Put Ross Bridge and its amenities in other better-known golf destinations and the price would soar exponentially. Daily stay-and-play packages start at $174.

Another significant aspect of Ross Bridge is that RTJ Golf Trail companion facility Oxmoor Valley is just a mile away. Offering 54 holes that includes a short course, golfers can set up shop in the castle-themed Ross Bridge 259-room hotel for a weekend stay and never play the same hole twice.

“It just adds to what we have here,” Purser said of the proximity. “It’s helped us bring in more stay-and-play packages.”

With an extraordinary pool for the kids and spa for the significant other, it’s not a surprise Ross Bridge is also a prime landing spot for weekend getaways for locals.

“It’s like a mini-vacation where you don’t have to leave town or the state, you can just pop over here and it’s like you have gotten miles away without driving too far,” Purser said.

“This was the first time Golf magazine has named its Top 100 resorts and we are delighted to have Renaissance Ross Bridge Resorts and Spa on this prestigious list,” Cannon said in a release. “To be compared with iconic golf venues such as Pebble Beach, Pinehurst, Bandon Dunes, Broadmoor, Greenbrier and others showcases the quality of the golf experience we deliver in Alabama.”

Just don’t ask Purser which is the signature hole at Ross Bridge. If he has one, he’s not saying.
“I’ve been asked numerous times to pick a signature hole, but there truly are so many views here that it would be difficult,” he said. “I like to hear from guests which holes they enjoyed the most, and I get a lot of players say the par-3 fourth hole or No. 14. And then there is No. 18, a beautiful finisher that is no easy par, either.”

PrevPrevious ArticleHeading to Orlando for Golf? Check Out Kissimmee
Next ArticleGift of Golf: Down Syndrome Doesn’t Slow Pryce Holcombe DownNext