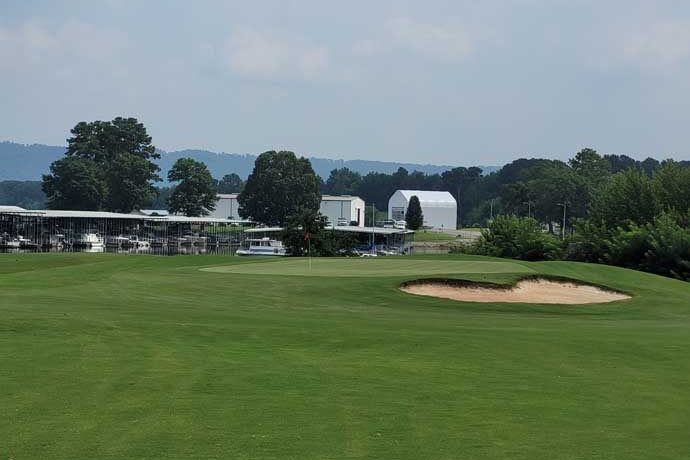 Practice facilities also will be expanded

SCOTTSBORO – The Goose Pond Lake Course, one of north Alabama’s popular public golf courses, is closing for several months to get a greens makeover.

The Lake Course, which in the past has hosted numerous Alabama Golf Association events, will close May 31 to replace its current greens with miniverde Bermuda grass. The Lake Course will remain closed until sometime in September when officials expect the new greens to be ready for play.

Goose Pond is located in Jackson County in the northeast portion of the state, about 45 miles east of Huntsville.

Lyle Sosebee, Goose Pond’s general manager, said the Lake Course’s practice area will be expanded while the Lake Course is closed. During the past winter, the course’s irrigation system was upgraded and new covers for the greens were purchased.

Sosebee said he expects the new greens to ready by mid-September, but much of that is dependent on the weather. He said they will not re-open the course until they feel it is completely ready. He said they took a similar approach when the Plantation Course greens were renovated.

“But we didn’t feel like they were ready, so it wasn’t until mid-April before we actually opened,” he said. “We didn’t want to open with an inferior product.”

Sosebee said they took a different route to re-doing the Plantation Course greens. In that re-do, they simply sprigged the new miniverde grass on top of the old green surfaces and didn’t start until July.

On the Lake Course, they will scrape the top 4-to-6 inches of surface and replace it. He said the greens shapes and size will remain the almost the same as the current greens.

“We plan to have the same contours that we have always had,” he said. “I’m sure some people will see some differences, but we plan to keep it the same because we feel like they were pretty good before.”

Sosebee said by starting the work in early June, it gives the new greens grass an extra month of warm weather to grow. Bermuda grass thrives in hot weather, and Sosebee hopes for a dry, hot summer to help the grow-in process.

“The driving range expansion is something we have been wanting to do for about 20 years,” he said. “It’s a major disruption and we couldn’t do it in the winter because it won’t grow in and in the summer it’s too busy.”

He said the range will be larger and easier to access for golfers. Curbs and gutters also are being added.

During the winter months other, less visible changes were made. The irrigation system was upgraded and new greens covers were purchased.

Goose Pond’s Lake Course is one of the busiest in north Alabama, averaging around 33,000 rounds. Sosebee said they didn’t want to make the improvements until they felt like the Plantation Course was in peak condition. He said last year was busiest in Goose Pond’s history.

“The Plantation Course’s rounds have really exploded,” he said. “It’s such a family-friendly course. We didn’t want to disrupt anyone from playing.”

Goose Pond’s Lake Course opened in 1971 and is a George Cobb design. In addition to the golf, the resort features cabin rentals, a lodge, cabin rentals and three restaurants. For more information about Goose Pond Colony Resort, go to goosepond.org.