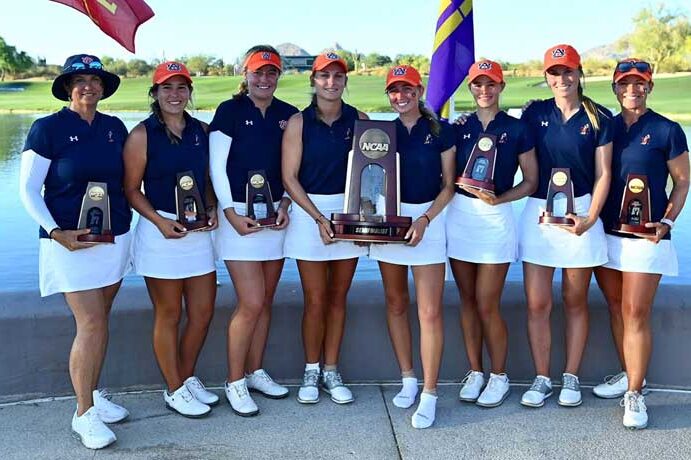 Tigers fall to No. 1 seed Stanford

The Auburn women’s golf team’s postseason run at a national championship came to a close Tuesday in the Arizona desert.

After finishing fifth in the stroke play portion of the NCAA Women’s Golf Championship and qualifying as the No. 5 seed for match play, the Tigers topped UCLA in the quarterfinals before falling to No. 1 seed Stanford in the semifinals.

With a star-studded lineup that features Rose Zhang, the Cardinal edged Auburn 3-2 in the semifinals after the Tigers edged UCLA by the same score at the Greyhawk Golf Club’s Raptor Course.

“I’m incredibly proud,” Auburn head coach Melissa Luellen said. “They never quit fighting. We had some mistakes, some tired swings. It’s such a long week with the heat and the wind in the afternoon. But what a group. Our seniors, we really appreciate how they’ve transformed this program. They will be missed.”

Second time in 3 years the Auburn women reached the semis

It was seniors Kaleigh Telfer and Mychael O’Berry who secured the two wins needed to beat UCLA in the quarterfinals. Telfer made eagle on No. 7 to win her match, 3&2, and O’Berry followed in the anchor spot with a 2&1 victory to send the Tigers to the Final Four.

The duo has made match play in all three postseasons together with two appearances in the semifinals.

Junior Megan Schofill also won her match against UCLA and then came back in the semifinals and beat Stanford’s Sadie Englemann, 2-up, to go 2-0 on the day. Schofill finished as the team’s top finisher in stroke play, placing tied for 27th overall.

As a national semifinalist, Auburn earned an invitation to the 2022 East Lake Cup in November.

It’s the second time in three years the Auburn women reached the semis.

“It’s so hard to get here,” Luellen said. “But it’s something that is doable for future teams. The girls that are returning, the experience that they’ll gain will be able to help with the young ones. We’ll be quite young next year, but we’ve got some really great talent. We’ll debrief, and our eyes will be set on Grayhawk 2023.”