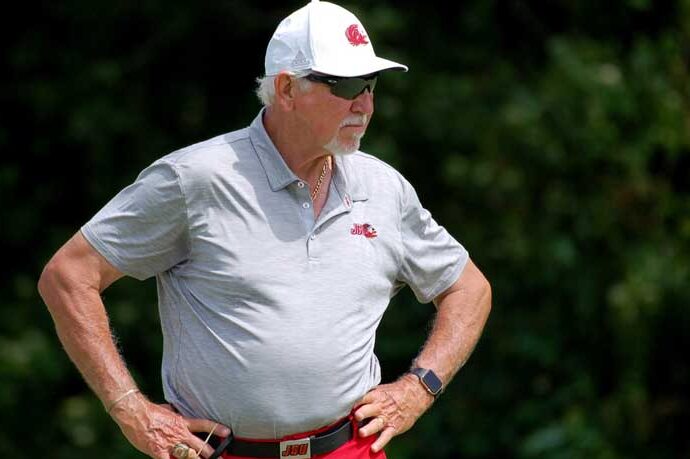 JACKSONVILLE – For the first time in 40 years, Jacksonville State University is looking for a golf coach. Two, actually, as the joint position held by retiring James Hobbs is being split into two separate positions.

Hobbs, a member of the school’s athletics hall of fame, is retiring after 40 years as the golf program’s coach.

Hobbs’s career at Jacksonville State spans 45 years, including the past 40 as golf coach. Under his direction, the Gamecock men’s and women’s golf programs made a combined 23 NCAA Regional appearances, including 16 after JSU moved to Division I in 1993. He was inducted into the JSU Athletics Hall of Fame in 2015.

James Hobbs has absolutely no regrets

“But everything has to come to an end at some point, and I’ve reached an age to where it’s harder and harder to maintain the pace that a good golf program needs. But I can honestly say that I have absolutely no regrets and I don’t leave here thinking that I have anything left to prove.”

James Hobbs started his Jacksonville State career in 1977 as an assistant basketball coach and transitioned to golf coach in 1983 while maintaining his basketball position.

He called the move into golf both “great” and “a challenge,”

“It was a great move for me and a great challenge for me because I didn’t have the background in golf like I had in basketball,” he said. “I took what recruiting skills I had and basically tried to go out and find the best players I could find for the university, and I feel that it has paid off pretty well in terms of the success we’ve had.”

Teams coached by James Hobbs reached the NCAA tournament six times in Division II before moving to Division I, from where the Gamecocks would go on to win 11 conference titles. In 1995, Hobbs started the JSU Women’s Golf program from scratch and went on to win six conference titles at the Division I level.

“First and foremost, I want to thank Coach Hobbs for his service to Jacksonville State University, Gamecock Athletics and, more importantly, our student-athletes over the past 45 years,” JSU Athletics Director Greg Seitz said.

“He took over our men’s program in 1983 and developed it into one of the best in the Southeast. In 1995, he started our women’s program and built it into a championship-caliber program, as well. Our golf program is what it is today because of Coach Hobbs.”

Hobbs coached seven All-Americans during JSU’s time in Division II, and after the Gamecocks made the move to Division I, he coached 10 Ohio Valley Conference Players of the Year – three on the men’s side and seven on the women’s. Twelve of his players – five men and seven women – have been named Freshman of the Year in the OVC.

Hobbs took JSU from Division II to Division I successfully

Hobbs also saw his golfers succeed beyond JSU, with former OVC Champions Danny Willett and Matt Wallace evolving into two of the world’s top golfers. Willett won his first European Tour event in 2012 at the BMW International Open and became the first player to play collegiately at an Alabama university to win the Masters in 2016. Wallace (fourth) and Willett (ninth) both placed in the Top 10 of the 2019 Race to Dubai Standings on the European Tour.

The success that Hobbs’s programs have enjoyed has been greater than many of those in the Gamecocks’ department, something that means a great deal to the coach.

“The one thing that really stood out to me when I came here was the tradition that Jacksonville State athletics was known for, and I’m proud that we’ve been able to live up to the expectations that came with being here,” he said.