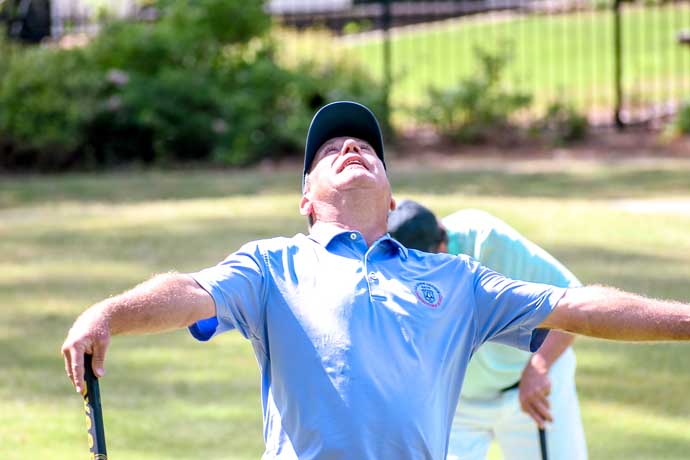 GADSDEN – Robert Nelson came into the final round of the 25th Alabama State Senior Amateur Championship on Sunday three shots off the lead being held by two players.

When the day was over Nelson, of Fairhope, owned the championship trophy at Gadsden Country Club.

Nelson used a barrage of eight birdies on the 6,274-yard Gadsen course to shoot 4-under-par 67 Sunday to overcome the three-shot deficit and win by one shot over two players.

Nelson’s three-round total of 208 was 5-under on the course located in east Alabama. The Fairhope resident opened play Friday with a 73, but rallied Saturday to shoot 68 to get in position for his charge in the final round.

Kevin Daugherty of nearby Anniston matched Nelson’s 67 in the final round of the State Senior Amateur to pull into a tie for second place at 209 – just one shot behind.

Shaw Pritchett of Montgomery, who started the day tied for the lead with Decatur’s Chris Lemley, shot even par 71 in the final round to share second place. By virtue of a scorecard playoff, Daugherty was awarded second place, with Pritchett taking third.

David Head of Sterrett claimed his first-ever state title at the 4th Alabama State Super-Senior Amateur Championship. Head carded 1-under 70 in the final round to finish at 5-under 208.

Richard Jeffers of Mobile finished second. He also shot 70 in the final round and finished six shots back at 214. Robert Pewitt of Hoover posted 3-under 68 and was at 215 to finish in third place.

Chip Howell (Anniston) was fourth at 218 and four players tied for fifth place at 219.