Need a caddie? Caddy Time has you covered 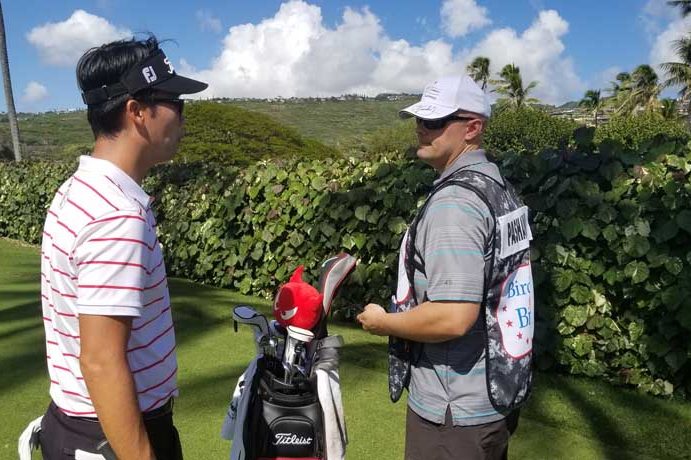 Tournment or casual round, they’ll find the right looper for you

One of the best ways to enjoy a round of golf is by using the services of a caddie. The problem is that opportunities to experience golf in Alabama with a caddie are few and far between.

That’s changing, though, thanks to Caddy Time, a fledgling company that matches caddies with players who want to golf in Alabama, Tennessee and throughout the rest of the U.S., its territories and Canada.

Industry estimates reveal that only about 1 percent of courses across the country have a caddie program. That includes golf courses in Alabama, where only a handful of private clubs have those services available.

Caddy Time launched in September, and now securing the services of a caddie for anything from a casual round to a tournament play is as easy as clicking on the Caddy Time app.

The company is the brainchild of Brett Jaffee and David Rider, lifelong friends in Orlando, Florida. The idea came when Jaffee was playing at Streamsong in 2020. The popular resort offers caddies, and in December 2020 Jaffee decided to use one.

“I was 55 years old and I play a lot of golf,” Jaffee said. “David and I were playing a round of golf, like we have hundreds of times, but it was the first time we used a caddie. It was such a wonderful experience that we wondered why it wasn’t offered more readily to the golfer.”

Caddy Time saw a need and a business was born

Seeing a void that needed filling and noting the necessity for caddies at the 99 percent of courses that don’t offer caddies, Jaffee and Rider went to work building Caddy Time from the ground up. They brought on Bryan Rosenfarb as chief technology officer. Nine months after that round at Streamsong that gave them the idea, Caddy Time was launched.

The concept of Caddy Time is simple – caddies register on the company app and are entered into a database. Golfers post details about their upcoming round and caddies within a 100-mile radius are notified of the round and are invited to review. When a match is made, the player and caddie communicate the details through the app.

Caddies are assessed when they register and assigned a rating of Bronze, Silver, Gold or Platinum based on their skill level. For example, a lower-rated caddie would not be assigned to a player competing in a tournament setting.

The cost of Caddy Time is in line with clubs and courses that offer caddie services – an $80 booking fee plus a suggested minimum tip of $20.Caddies can work as little or as much as they want. The average rate of pay is between $20-$50 per hour, Jaffee said.

Matching a caddie with a player through an app

“It’s a great side hustle for somebody who loves golf,” he said. “It’s also a great way to pay for your own golf.”

Jaffee said business has been brisk since the Caddy Time launched in September. In its first 45 days, more than 100 caddies in 16 states had registered – all by word of mouth. Caddy Time is an NCAA-approved job for student-athletes, Jaffee said.

“Most student-athletes have terrible schedules, and we’re an opportunity to for them to make $30-$50 an hour for a three- to five-hour engagement,” he said. “And I guarantee you that if you are a fan of Alabama (or Auburn) and you get an Alabama (or Auburn) student-athlete as your caddie, they’ll get more than a minimum tip.”
Early after the company launched, Jaffee said Caddy Time was able to provide a coaching caddie for a girl playing in a junior tournament in North Alabama.

Junior golf is an area where Jaffee believes there is ample opportunity for growth.

“There are tournaments that allow caddies and most kids don’t want to go out with their parents to caddie for them,” he said.

Caddies must get permission from the course to work, and the company kicks back a small percentage of the proceeds to the course, according to the company’s fact sheet. He said Caddy Time has mostly been received well by the courses.

Jaffee touts Caddy Time as being more innovative that most courses that feature caddie programs. At those clubs, it’s a next golfer up gets the next caddie in line.

“That’s not the best system,” he said. “Our system reflects on what kind of round they have that day – is it a leisure round, a business round, a competitive round, a physical assistance round, a buddy round – and the caddie who is able to deliver that service is the one they get.”

Need a German-speaking caddie? Caddy Time can find you one

“I live in Orlando and we get a lot of visitors from other countries,” he said. “If you are visiting from Germany, you can request a caddie that speaks German.”

Once a round is complete, both the player and caddie rate each other on the app.

When asked why nobody has come up with this concept before, Jaffee has a quick response.

Jaffee said Caddy Time has had a strong initial presence in Florida, with Arizona, California, Wisconsin, Illinois and Texas following. Alabama, Tennessee, Missouri and the Carolinas are seeing increased numbers.

He also said players are registering for caddies for rounds at all different types of courses – country clubs, munis, public and even executive and nine-holers.

The Caddy Time app is available in the Apple app store and in the Google Play store.