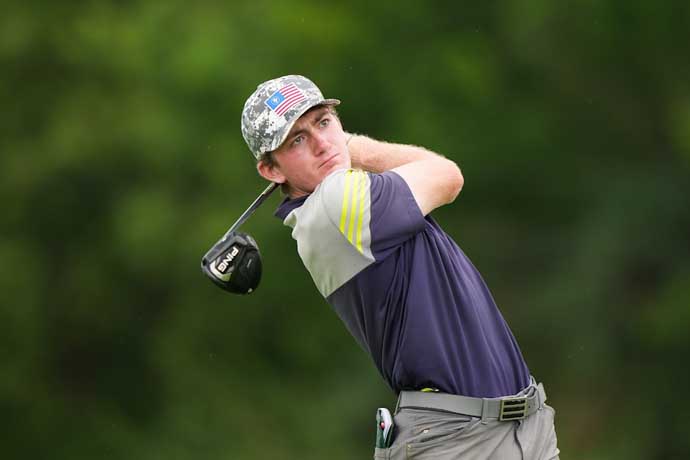 A good year got even better for Huntsville’s Nick Dunlap Thursday when he was named the AJGA’s Rolex Junior Player of the Year.

Dunlap, who won the U.S. Junior Amateur, is the first Alabama native to win the award. New Jersey’s Megha Ganne was named the Girls Player of the Year.

Nick Dunlap, who plays at The Canebrake Club in Athens and is verbally committed to the University of Alabama, had three national junior golf victories to end the season at No. 1 in the Rolex AJGA Rankings.

The high school senior played in 11 events recognized by the Rolex AJGA Rankings and finished outside the top five just twice. He notched his first win in 2021 in March at the Dustin Johnson World Junior after carding the low-round of the tournament at 5-under-par 67 at TPC Myrtle Beach.

He shot 66 to win a U.S. junior Amateur qualifier and he went 6-0 to win his first AJGA event at the Polo Golf Junior Classic at Liberty National, the host of the PGA Tour’s The Northern Trust.

In his final national junior golf appearance this season, Dunlap was one of 12 players selected to the Junior Ryder Cup U.S. Team in September. He will make his fourth-career appearance at the Rolex Tournament of Champions later this year, with his previous best finish in 2018 at T12.

Ganne started her campaign with a top-three finish at the 2020 Rolex Tournament of Champions at PGA National Resort & Spa, the host of the PGA TOUR’s Honda Classic.

Making her 2021 debut, Ganne had her third appearance at the Diamond Resorts ANNIKA Invitational presented by Rolex at World Golf Village in January and finished in third place.  She also competed at the Augusta National Women’s Amateur in the spring.

In her first event of the summer, Ganne won the Scott Robertson Memorial.

Ganne entered the national spotlight with her play at the U.S. Women’s Open. As a 17-year-old amateur, Ganne held a share of the first-round lead with her score of 4-under  67. After two rounds of 71-72, she was tied for third heading into the final 18 holes. Playing in the final group, Ganne finished her exceptional performance at 3-over-par 287 and earned low-amateur honors at T14.

PrevPrevious ArticleRenovations at The Refuge in Jackson, Mississippi
Next ArticleNeed a caddie? Caddy Time has you coveredNext