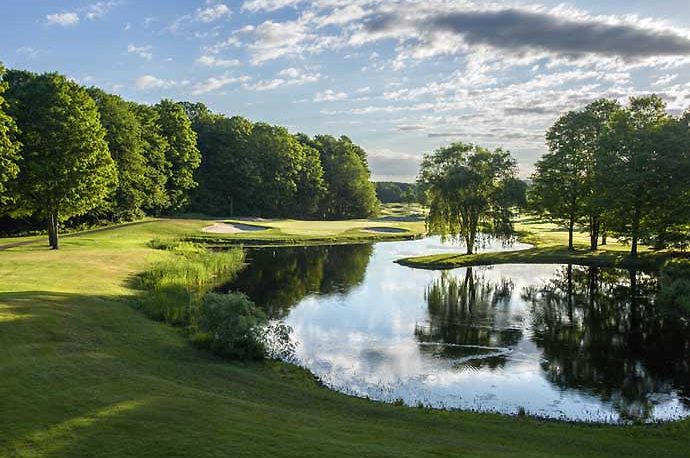 The reopening of the Donald Ross-designed Southern Pines Golf Club in North Carolina following an 18-month renovation is renewing interest in one of the greatest – and most prolific – American golf course designers of the early 20th Century.

The 112-year-old course, owned and operated for decades by the local Elks lodge, was purchased by the owners of the nearby Pine Needles and Mid-Pines resorts, which feature two Donald Ross designs. Pine Needles will host the 2022 U.S. Women’s Open.

When we played it during a Golf Writers Association of America outing several years ago, the Southern Pines Golf Club course was a little rough and in need of some TLC, but the bones were clearly there.

The course was renovated by Kyle Franz, who restored both Pine Needles and Mid-Pines to Ross’s original vision. Franz also was involved in the 2014 restoration of Pinehurst No. 2 by Bill Coore and Ben Crenshaw.

Thanks to Franz’s removal of 700 trees that obscured sight lines, the rise and fall of the terrain is more visible, according to a recent report in Golfweek. As much as 25 percent of the original greens’ square footage – lost due to maintenance practices over the years – was reclaimed.

An example of what a pioneer Ross was in the early 1900s: A 19th hole, the so-called “lost hole,” an extra par 3, was restored by Franz with the help of aerial photos from the 1950s. The hole will once again offer a shortcut from the fourth green to the 15th tee, allowing for a quick out-and-back nine-hole round.

Between 1899 and 1948, the year Ross died at the age of 75, he designed more than 400 golf courses in the U.S., Canada and even Cuba. Some estimates put his portfolio of work at around 600 courses, but the Donald Ross Society, a group organized in the 1980s to honor and catalog his work, officially recognizes 455 designs.

Recognized as the father of golf course architecture in America and the man behind Pinehurst No. 2, Ross immigrated from Scotland in 1899 and made his home in Pinehurst. His philosophy might be boiled down to his often-repeated phrase: “Golf should be a pleasure, not a penance.”

He designed courses that fit into the natural contours of the land; not unduly penal, but strategic and deceptive – courses that players of all abilities could love and respect. He is best known for his domed greens and false green fronts.

You could probably spend a lifetime trying to play all 400-plus Ross designs – that is, if you could get on; most of them are private, and some are among the most exclusive clubs in the nation.

But one easy way to enjoy what Donald Ross brought to America from his native Dornoch, Scotland, is to play the Donald Ross Memorial Golf Course in Boyne, Mich.

With ten golf courses, Boyne is one of the largest golf resorts in the nation. What makes the Donald Ross Memorial at the Boyne Highlands Resort special is that every one of its 18 holes is an exact or near-exact replica of a hole from another Ross course.

They are accurate down to the yardage, shape, bunkering, green shapes and contours and, as much as possible, even elevation changes within a hole.

The Search for the Best Donald Ross Holes to Replicate

A team of Boyne officials spent years flying around the country, playing Ross courses before selecting 18 holes to be replicated at the Boyne Highlands Resort. Holes were borrowed from Pinehust No. 2, Seminole, Oak Hill, Inverness, Detroit Country Club and Aronomink Golf Club, among others. One hole was borrowed Royal Dornoch in Scotland, which Ross designed after an apprenticeship under Young Tom Morris.

“The green complexes were an area we spent a great deal of time on,” said Bernie Friedrich, one of the Boyne officials on the selection committee who was recently inducted into the Michigan PGA hall of fame.

“We were able to get detailed drawings and photos for many of the greens, including some CAD drawings,’ he said. “The greens are truly a pure Ross experience.”

“There was a lot of effort and detail put into the process. We weren’t just picking random holes,” Friedrich stressed.

“We looked at the land we had and tried to match the best we could to the slopes. If a hole rose by 10 degrees of slope, we would try and find a Ross hole at a club with similar slope. For example, in our routing, we found the perfect uphill slope to fit in the popular 12th hole from Oak Hill,” Friedrich said.

Boyne is located toward the northern tip of lower Michigan, north of Grand Rapids and Traverse City and not far from where Lake Michigan meets Lake Huron. It’s about a five and a half hour drive from Chicago and a four-hole drive from Detroit.

A trip to Boyne has plenty of other benefits. Its family-friendly resorts (there are three) feature courses by Arthur Hills and Robert Trent Jones, plus lake fishing, water skiing, horseback riding, mountain biking and ziplining. For more on what Boyne and the Ross Memorial course have to offer, visit https://boynegolf.com/

Dan Vukelich is the online editor of Alabama Golf News and editor of newmexicogolfnews.com.