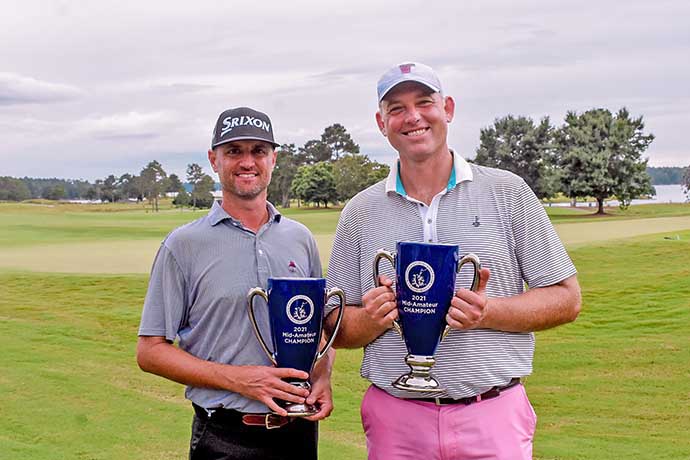 Although they led or were tied for the lead throughout the 54-hole tournament played at Willow Point Golf and Country Club in Alexander City, the Coshatt-Melnyk team won on the second hole of a playoff with Helena’s Blair Hamm and Hoover’s Clay Guerin.

The Coshatt/Melnyk team took the lead the first day with an 11-under 61 and followed with rounds of 65-64 to get into the playoff. Hamm/Guerin opened with 66 and then went 62-62 to force the playoff. Both teams finished at 26-under 190.

In third place was the team of Eric Howle and Woodie Eubanks, who turned in three consecutive rounds of 64 to finish two shots back at 192. Johnny Komara and Tim Harwick claimed fourth place with rounds of 64-65-65.

“It was a grind on the back, we had to work hard,” Melnyk told alabamagolf.org.

Hamm/Guerin shot 29 on the final nine to force the playoff.

23 Teams Advanced to Souheast Mid Am Four Ball Final Round

The Mid-Amateur Division cut line fell at 9-under-par 135 with 23 teams advancing to the final round.

The second round was suspended by rain and completed before Sunday’s final round.

Jordan/Harris edged Greenville’s David Hancock and Montgomery’s Mark Harris, who closed with a 65 to fall one shot short at 196.

The Montgomery team of Jeff Taylor/Shaw Pritchett finished third, shooting 65 in the final round to finish two shots back at 198.
The Senior Division cut line fell at 7-under 137 with 13 teams advancing to the final round.

Sparks shot 65 to edge Montgomery’s Shaw Prichett and Tuscaloosa’s Will Morrison by one shot at Montgomery Country Club.

Pritchett and Morrison each made a par on the first playoff hole to earn qualifying spots in the national tournament set for Sept. 25-30.

Daniel Burns of Owens Cross Roads is the first alternate, while Birmingham’s Jackson King of Birmingham shot 67 to take the second qualifying spot.

In the Women’s Mid-Amateur qualifier, also at Montgomery Country Club, Canadian Nonie Marlar was medalist with a 73 to earn her berth in the national tournament.