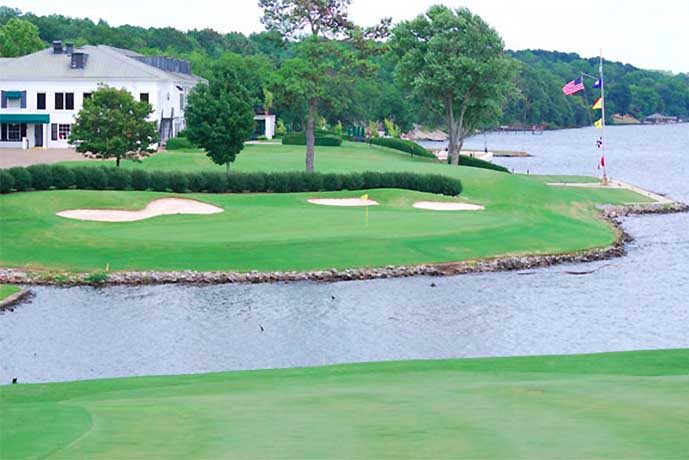 Birdie-eagle-birdie finish gets fomer UNA golfer to 12-under

The course record from the white tees at Turtle Point Yacht and Country Club in Killen now belongs to Ike Alexander.

In what was supposed to be a casual round with friends, the former University of North Alabama golf team member played perhaps his most memorable round Sunday, Aug. 1 when he fired a 12-under-par 60 on the par 72  Robert Trent Jones Sr. design.

Ike Alexander, who recently completed his college eligibility, has recently been helping out at the course in the pro shop. He said he had few expectations of shooting a good score when he started the late afternoon round with Brent Tatum, Payton Holcombe and Zach Ashley.

“I’ve only played about four rounds in the last two months,” Alexander said. “I think I was a little burned out after college and I haven’t had much desire to play.”

Alexander, who played high school golf at nearby Mars Hill Bible School, holed out from 63 yards for an eagle at the par-4 13th to get to 8-under.

Ike Alexander: Nervous at 8-under

“That’s when I started to feel nervous,” he said. “It was not a comfortable feeling being 8-under. In the back of my mind, I kind of expected that I would choke. The lowest I have shot is 7-under.”

The most stress the round provided came on Nos. 14 and 15 when errant drives left Alexander needing to scramble for pars. He punched past the hole from the left rough on No. 14 and had to make a testy 10-footer for par to remain 8-under. He leaked his drive into the right rough on No. 15 and played a provisional because he thought it might be out of bounds.

After punching his second shot through two rows of pine trees, Alexander again saved his par.

“I had a horrible lie – there was a fallen branch up against my ball and I had to hit it off the toe and through the pine trees,” he said of his par save on No. 15. “Fortunately, it was kind of wet in front of the green and that took some of the heat off the shot.”

That set up a birdie-eagle-birdie finish for his 60.

“I usually get to a certain point and I don’t go any lower,” he said. “Everything clicked and came together. The weird thing is I didn’t drive it very well – I only eight fairways.”

Gator Todd, the current men’s assistant golf coach at Vanderbilt University who played at the University of Alabama, previously held the course record of 61. Alexander said he got a text from Todd on Monday.

Biggins, McCarron to represent Alabama in US Adaptive Open

Alexa: your personal caddie or spy?