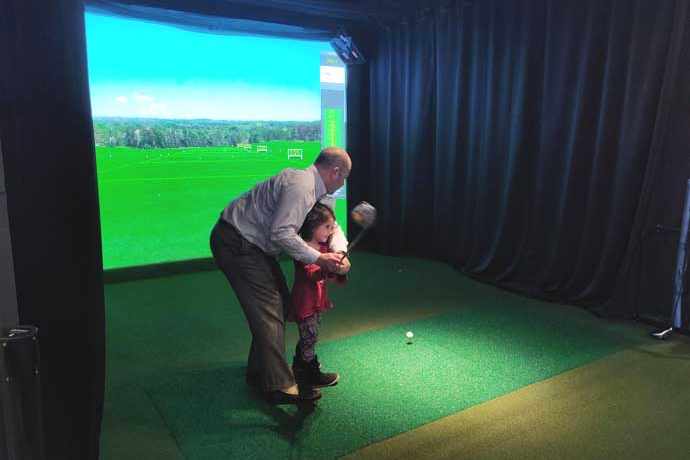 I got in a quick nine holes the other day at Cape Kidnappers in New Zealand without ever leaving the Shoals, thanks to a cool new HD golf simulator at Birdy’s Sports Grill.

The best part? No long-distance flights. No passport. No staying at a high-priced resort, jet lag or 14-day quarantine for traveling to another country.

Nope, just a short drive to the only public golf simulator in the area.

Before teeing it up at Cape Kidnappers, though, there was a range session at Banff Springs where I found out how slow my swing speed really is and also my spin rate and launch angle, among other things.

I haven’t done much with golf simulators – maybe just three or four times before hitting Birdy’s – and never for an extended period. Mostly, it has been just a few swings and done. So, getting about 45 minutes on the HD Golf Simulator was a bit of a treat.

Cape Kidnappers and Banff Springs are just two of the courses available on the HD Golf Simulator at Birdy’s.

You can tee it up at the Pebble Beach Golf Links, the Old Course at St. Andrew’s, Pinehurst No. 2, Bethpage Black and even Torrey Pines, site of the upcoming U.S. Open Championship.

There are plenty of other world-renowned courses available to play at the touch of a button.

The simulator tracks each shot and gives you distance, wind speed and direction for your next shot. For me, putting was the most difficult part of playing on the simulator even though you are given the slope and break. But putting to a hole on a screen is a bit more awkward than putting to an actual hole.

The simulator also has a variety of other games available such as closest to the line, long drive, putting and chipping and a skills competition.

Birdy’s has golf clubs available or customers can use their own clubs.

Birdy’s, which also has virtual reality games, shuffleboard, darts and cornhole, opened in February 2020 as part of a three-business complex at 400 Avalon Ave. in Muscle Shoals. Smokin’ Jalapenos and 306 BBQ occupy the downstairs portion of the complex and provide food service to Birdy’s, which also features a fully stocked bar.

The owners say the HD Golf Simulator has proved to be a valuable addition, and much of the simulator business is of the walk-up variety. Cost is $30 per hour for up to six players. The simulator can be reserved during business hours for $40 per hour, or reserved before or after hours for $50 per hour.

Featured image: A man working with young girl on the simulator