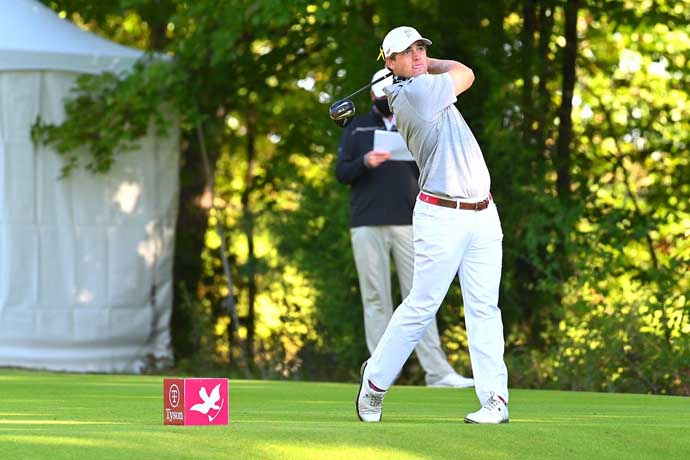 The Alabama Crimson Tide Men’s Golf Team rarely, if ever, finishes in last place in a tournament, yet that’s what happened over the weekend when a bizarre series of events led to the team’s disqualification at the LSU Tiger Invitational.

The Crimson Tide drama unfolded on Saturday when Davis Shore sustained a back injury and was unable to play. Alabama posted a team score of even par on Day 2 and was warming up for Sunday’s final round when officials discovered that freshman J.P. Cave had signed an incorrect scorecard from Saturday’s round.

Cave signed for a bogey on No. 15 but, in reality, had made a double bogey 6. That led to his disqualification, which left the Crimson Tide with only three players.

Alabama was in eighth place at the time but because they didn’t have enough players to field a four-person team, they were relegated to last place in the 15-team field.

The Alabama team was allowed to compete as individuals in the final round and Wilson Furr tied for third place at even-par 216. It didn’t seem as if Furr would land the second Top-5 finish of his career when he opened with a 79, but he rebounded with rounds of 69 and 68 to climb the leaderboard.

“It was a strange all that occurred, especially on Saturday after Davis not being able to play,” Alabama coach Jay Seawell said.

“I’ve been coaching for 29 years and this is the first time I’ve ever had a kid sign for an incorrect card. Those are the rules of golf and that responsibility at the end of the day falls on me as the head coach. I hate it for the guys because I really wanted to see how they would compete as a team and we didn’t get that opportunity. In the end, life has a lot of learning experiences and sometimes they are harder than others, but it is just a game and just golf and we will learn from it.”

Seawell said the Crimson Tide called the tournament a learning experience and said the team will move forward.

“We’ll make sure to do some things to talk about and move forward on and we’ll do some things in the future where certain things won’t happen,” he said. “I look forward to seeing how we handle it. That’s what we talked about at the end the round. This can define us negatively or positively depending on how we handle it. I believe in the character of this team and we’ll go to work to make sure we are positive.”

Alabama will tee it up next March 15-17 when Auburn hosts its Tiger Invitational.

From the Alabama Golf News Notebook ….

Ardmore High School alum Lee Hodges, who plays on the Korn Ferry Tour, finished T13 in his appearance at the PGA Tour’s Puerto Rico Open. He took home a check for $60,750. He was T2 after Day 1. A strong round of 69 on Sunday put him seven strokes behind the winner.

Branden Grace won the event, finishing a shot ahead of Jhonattan Vega. The Puerto Rico Open was held opposite the World Golf Championships-Workday Championship in Bradenton, Florida.